How long can Bill Morneau keep this up?

Politics Insider for Aug. 12: The anonymous knives are out for the finance minister, Carla Qualtrough has some blunt talk and get ready for a drunken invasion of Canada 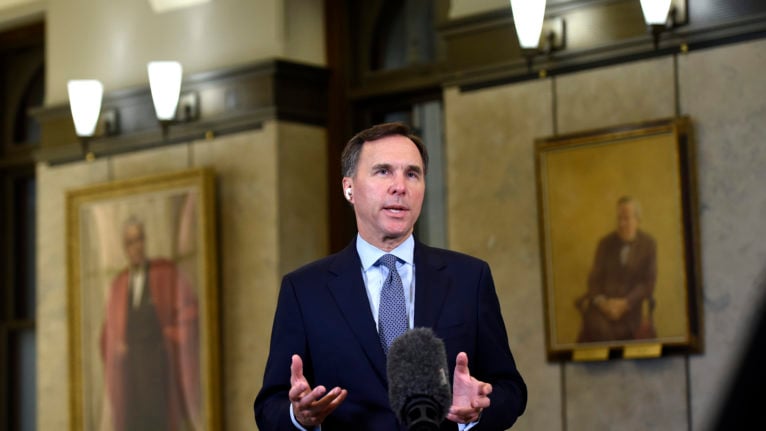 Minister of Finance Bill Morneau participates in a remote TV interview in the Foyer of the House of Commons on Parliament Hill, in Ottawa, on Wednesday, July 8, 2020. (Justin Tang/CP)

Remember those early days in the pandemic, when the Liberal government took serious guff for proposing unprecedented taxing and spending powers, and then for legislating a wage subsidy that covered a measly 10 per cent of workers’ salaries? Well, a Globe and Mail story under Robert Fife’s byline, a reporter to whom influential anonymous people talk, has something to say about those flubs. They were all Bill Morneau’s fault, and Justin Trudeau saved the day by overruling his finance minister.

Who spoke to Fife? What’s their motive? We might only know when a future tell-all explains everything. But before the end of the day, the next chapter in the story was already written. Reuters reported that questions about Morneau’s future prompted uncertainty—a dreaded word—in the markets. The same story floated Mark Carney, newly one of Trudeau’s go-to advisors, as a potential replacement for Morneau. By mid-afternoon, the PM’s office was still officially expressing confidence in the finance minister. In a statement, the PMO credited Morneau with a long list of accomplishments, including “taking the lead role in the creation of the CERB. (Employment Minister Carla Qualtrough might have something to say about who gets credit for the CERB.)

Qualtrough had some blunt words for the Commons ethics committee during testimony yesterday on the WE scandal. The minister said her government “dropped the ball” on the student grant program, and offered “no excuse or justification” for the mess. She did qualify her remarks. “It was a pandemic and things were crazy and we were going at break-neck speed,” she said. “We knew from the start things would not be perfect, and we were prepared to have to course correct when we needed. There was no time to test or pilot the programs.”

Lobbying in the COVID era: Last week, your newsletter correspondent spotted a briefing note for Lobbying Commissioner Nancy Bélanger that recommended a special report on pandemic-era lobbying. Maclean’s filed an access-to-information request for the note, and the office sent it in only 80 minutes—which might be the fastest ATIP response on record. The staffer who wrote the note flagged that some critics might see the report as “political” or “opportunistic,” and possibly even premature. But the plan is to aim for a release as early as this fall. Read the full briefing note.

2020 is the average year that could’ve been: Marie-Danielle Smith, writing in Maclean’s, digs into some federal polling from this past winter that tested Canadians’ opinions on the state of the economy and the work of the government. What she found was that focus groups were super-meh about it all. And they felt that way while they sat in close proximity to each other. Perish the thought.

Consider how otherworldly it seems that just six months ago, Canadians were sitting around conference tables in Vancouver, Montreal, Calgary, Mississauga and Charlottetown—next to each other! INDOORS!—gabbing, maskless, about how things were generally meh. The renegotiation of NAFTA had been decent. The legalization of cannabis had been nice. The government could do better, in various ways, on climate change and pipelines.

An accidental invasion of Canada: The RCMP, Coast Guard and Transport Canada are all gearing up for an influx of Americans who could end up floating ashore near Sarnia, Ont. The annual Port Huron Float Down, an informal gathering of thousands of rowdy raft-riders and drunken dinghy-danglers on the St. Clair River, is set for Aug. 16. The Mounties are threatening to fine and arrest the Yanks, the Coast Guard is trying to discourage participation and Transport officials are closing the waterway to unauthorized traffic, lest a laker on a schedule finds itself steaming toward directionless castaways.

Speaking of Americans, Joe Biden found himself a running mate for this November’s election. When he asked Kamala Harris, a photographer captured the extremely 2020 moment on camera. Yes, that is a framed Hagar the Horrible comic strip on his desk. Yes, someone looked it up. And yes, there’s an earnest backstory.