In week 1, the Liberals spent as much as $148,947. The Tories, meanwhile, are not as sold on Facebook and are turning to the phones, documents suggest. 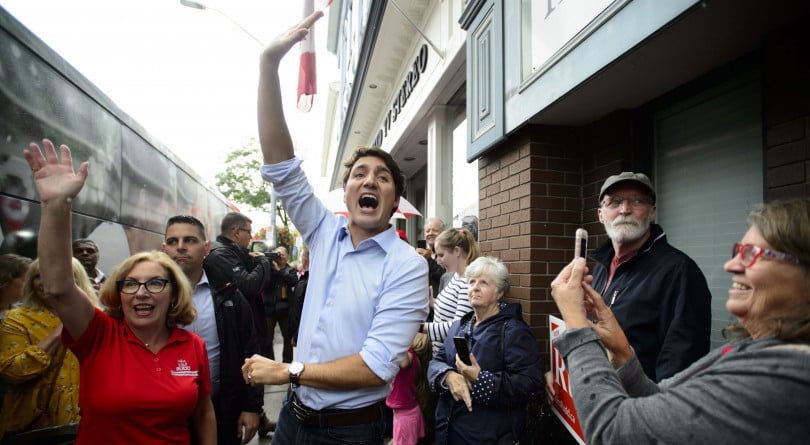 In the first week of the election campaign, the Liberal Party outspent all the other parties combined in Facebook ads—something that reflects a different philosophy between the two main parties about the best way to reach votes in this campaign, according to internal party documents obtained by Maclean’s.

Facebook’s ad library is a record of all the ads purchased by political candidates and parties, launched after the Liberal government changed the Elections Act to require any platform running political ads maintain a public registry. Only Facebook and its subsidiary, Instagram, have set up such a registry. Google and YouTube opted out and are not running political ads during the election.

Facebook’s registry shows some demographic information about each ad’s reach and the range of money spent, although it doesn’t provide precise numbers for buys of less than $100, so it’f not possible to report exactly how much each party has spent, but it is clear that the Liberals are outspending the other parties, as they did in the last election.

The Conservatives central campaign has spent $73,478 on 332 ads, while 98 Conservative candidates have spent as much as $15,510 on 363 ads, a fraction of the Liberal buy at the riding level.

READ MORE: Is that a Conservative campaigner calling, or a recording?

The Greens, People’s Party and Bloc Quebecois have not spent any money on party ads, and their candidates have spent relatively little: the Greens up to $5,615, the PPC $3,145 and the Bloc $2,490.

Parties don’t typically comment about their election strategy, but documents obtained by Maclean’s suggest that the parties are likely to pursue similar strategies in this election, with the Liberals putting more emphasis on online advertising and the Conservatives spending money on phone banks.

On Aug. 2, the Liberal party sent an email to Liberal campaigns across the country, promoting services offered by Data Sciences Inc., a company owned by Tom Pitfield, an old friend of Justin Trudeau and the 2019 campaign’s digital director.

“The team at Data Sciences has unmatched expertise in political Facebook advertising,” the Liberal email said. “They helped pioneer goal-optimized online campaign strategies in 2015 and have continued to perfect their methodology both with the Liberal Party of Canada and in campaigns around the world.”

In a 2019 interview with a European think tank posted on YouTube, Pitfield emphasized that digital advertising allowed the campaign to change its messaging depending on the reaction it was getting online.

“If people start to disengage you know the message that you’re communicating is not resonating,” he said. “In the 2015 federal election, we took our cues on how negative to be from the population we were talking to. If people started to not like what we were saying, and we knew we were losing them, we would just stop. And we didn’t have that kind of feedback loop in previous era of campaigning.”

In contrast, the Conservatives appear more skeptical about the effectiveness of Facebook advertising.

In a Powerpoint presentation made to Conservative campaign workers on May 3, a copy of which was obtained by Maclean’s, Conservative digital director Stephen McCreary highlighted Facebook’s phenomenal reach, but urged caution.

“Very powerful. Lots of targeting capabilities. Custom lists,” say his notes.” However: we were not able to replicate our national success re: acquisitions at a local level. Not a good voter ID tool locally–too expensive, and posts go beyond riding. Use ads if the opportunity arises, but don’t rely on them for voter ID or GOTV [get out the vote].”

The imbalance in spending is balanced out slightly by money from Conservative third party groups, who, so far, are outspending progressives in Facebook ads. Canada Proud, an offshoot of Ontario Proud, which played a role in pushing anti-Liberal messages in the Ontario election, spent $18,137 in the first week of the campaign on 11 anti-Trudeau ads, outspending progressive third party groups like North99, which spent $2,399 and Leadnow, which spent $1,695.

It looks like the Liberals may be better at using social media than the Conservatives are, says Prof. Colin Bennett, who studies the way that political parties use social media.

“Maybe the Liberals are able to do the data analytics in a more sophisticated way than Conservatives are, so that they have a better sense of how the Facebook ad program is going to work at the riding level,” he said in an interview.

Political campaigns are able to target voters using “lookalike audiences,” providing the company encrypted lists of the kind of voters they want to reach, which allows Facebook’s algorithms to target the ads in complicated ways.

By having Pitfield’s company buy ads for local campaigns across the country, the Liberals may be able to apply lessons learned in one part of the country to other ridings, says Kory Teneycke, who managed Doug Ford’s successful 2018 campaign but has no role in the federal campaign.

“I think that’s smart,” he said in an interview. “Because while the dashboard to control the advertising is available for anyone to do it, getting it to interface with your voter (database) and getting that data to link up properly, that can be a trick. And also there are a lot of ridings that are not terribly sophisticated.”

Bennett says many political professionals are not sold on Facebook’s value.

“There’s a huge battle going on within the digital campaigning world and elsewhere about whether Facebook is really any good, or whether the lookalike audience tools are a bit of snake oil,” he said. “There’s close associations, we know, between the Liberals and Facebook, and they’ve obviously been able to convince the Liberals that they can do things on Facebook they couldn’t do otherwise. My sense is the Tories have yet to drink the Kool-aid on that.”

Teneycke believes digital advertising is more effective than other forms. “While there are some people who still watch traditional TV, they are few and far between, and I’m going to get everybody on their mobile device and digitally, and even those who are still watching traditional TV, mostly sports, when a commercial break comes along, guess what they all do? They pick up their phone and look at stuff.”

Teneycke says he believes that Hamish Marshall, Scheer’s campaign manager, has a good handle on the technology, and will be using it intelligently in this campaign.

“I would say that one of the people within the party who was always very forward leaning on data and those sorts of things, would be Hamish.”