The Bloc poses a problem for the big three parties in Quebec. The Liberals rebound in Atlantic Canada. And the Tories gain ground in the GTA. 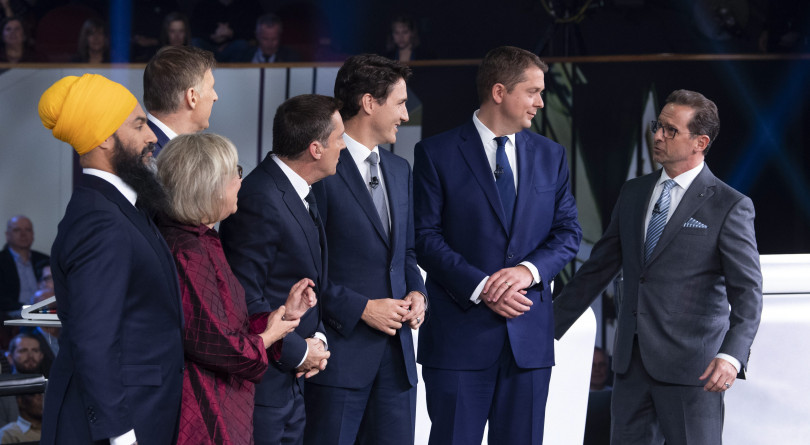 Justin Trudeau’s willingness to participate in twice as many French-language debates as he has in English has put a microscope on the importance of Quebec to winning a second majority mandate for the Liberals. And yet, Bloc Québécois leader Yves-François Blanchet appears to be finding a more receptive audience in La Belle Province.

Two elections ago, the Bloc only managed to win four seats in Parliament. Today, a new poll suggest a surging Bloc is causing some major headaches for Canada’s three biggest political parties.

In the Quebec City and Beauce regions, where Conservatives won most of the ridings in the last election, the Bloc has doubled its vote share from 13 to 26 per cent, according to the poll done by Innovative Research Group for Maclean’s, vaulting the party to second place in the region and trailing the Tories by only six points.

Meanwhile, the Bloc is up seven points among rural Francophone Quebec voters in the last month alone, putting the party level with the Liberals at 31 per cent. (The Liberals can take some solace knowing they’re growing their share of the Anglo-Quebec vote.) And in the region around Montreal, off the Island, the Bloc is neck-in-neck with the Liberals among Francophones, with the sovereigntist party’s vote share increasing by four points in the last month to 31 per cent, only a single point behind the Liberals.

“The Liberals have been counting on picking up NDP seats, especially in Quebec, as a way of offsetting their losses elsewhere,” says Greg Lyle, the president of Innovative. “So the Bloc rising in Quebec is a real problem for them.”

“Even the Tories have to be looking over their shoulder and wondering what’s going on,” Lyle adds. “If Blanchet can build on his momentum, it’ll be a problem for the Liberals and Tories.”

As the horserace in the national polls stabilizes, Lyle says the regional numbers offer insight into shifting dynamics and who could win the most seats on Election Day.

Take Atlantic Canada, for example, where the Liberals swept up every seat four years ago. In 2015, Trudeau’s team flipped 14 ridings from Conservative to Liberal. And today, in those same 14 ridings, the Liberals are polling at 46 per cent support, according to Innovative, even better than their 2015 election day numbers. Meanwhile, the Conservatives have dropped to 25 per cent support in those former Tory ridings, less than their vote share in 2015.

The Liberals have also witnessed a recent momentum swing happening in B.C.’s lower mainland, where the Liberals won the majority of the seats four years ago and Team Trudeau is now polling at 46 per cent support, a better share than its 2015 results.

But in the battleground Greater Toronto region, the Conservatives are closing the gap. In 33 ridings that have been historically close between the Liberals and Conservatives, according to the Innovative report—the Tories have narrowed a gap of nine points behind the Liberals to four points in the last month, suggesting Andrew Scheer can count on more than the 3 seats the Conservatives won amongst those seats last election.

Similarly, in 19 Liberal-Conservative swing ridings scattered across the country—west of Ontario and outside Vancouver’s lower mainland—of which the Liberals won 13 seats four years ago with a six-point lead in the vote, Lyle says that Trudeau could be vulnerable to losing some of those seats as his lead across these regions is down to three points.

Back in Quebec, Jagmeet Singh’s strong debate performances, in English and French, have done little to stop the exodus in the province where Jack Layton’s NDP witnessed an Orange Wave eight years ago. Even in the 14 ridings where the NDP performed strongest four years ago under Tom Mulcair—winning 13 seats and garnering 36 per cent of the vote—Singh’s NDP is currently polling at 12 per cent, according to Innovative.

“They’ve made steps in that significantly more people are thinking of them as their second choice than they were last week,” Lyle says. “But they have to go to the next step and knock people from their current voting attachment.”

Here’s the rub. With less than two weeks to go until Election Day, most Canadians have already made up their minds, according to Innovative, with 54 per cent saying they’ve heard all they need to decide who’s getting their vote.

The poll results are based on the results of two online surveys of a representative sample of 5,229 Canadians, but because of the methodology, a margin of error does not apply.