Innovative Research poll: Which leaders do voters really like?

Jagmeet Singh's favourability numbers are soaring, while Andrew Scheer and Justin Trudeau are stuck in the negatives 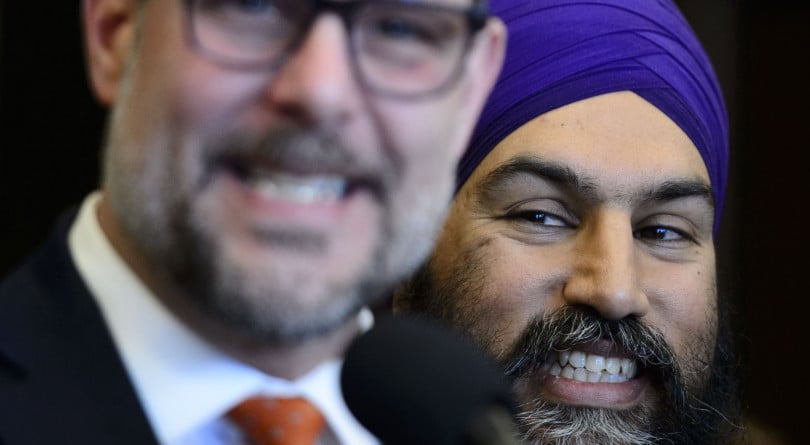 Singh is joined by NDP MP Alexandre Boulerice during a press conference on Parliament Hill on March 20, 2019 (THE CANADIAN PRESS/Sean Kilpatrick)

“Net favourables” sounds like something a middle manager would drone on about around a board room table when discussing focus-group testing of a new potato chip favour. And, in a sense, that’s exactly what it is. But when it comes to politics, it’s an important indicator of how overall public opinion of a candidate rises and falls over time.

The measurement adds the proportion of the population who think nice things about a politician to those who think nasty things, arriving at a mathematical value that is positive or negative. You could think of it as a more precise pollster’s scale ranging from the open-mouthed grinning emoji to the red-faced furious one.

And on that front, NDP Leader Jagmeet Singh is not only earning the biggest voter smiles of any of the federal party leaders at the moment, but they’re getting wider as the campaign rolls on.

Following what was widely seen as a strong and appealing performance in the English-language federal leaders debate on Monday, Singh’s net-favourable now sits at +16 per cent, according to a new poll conducted by Innovative Research Group for Maclean’s. That’s a big bump from the -4 per cent rating he had around the time the campaign started.

READ MORE: A 338Canada projection: Have the Tories blown it in Quebec?

“Singh does well whether people watched the debate or the news coverage,” says Greg Lyle, president of Innovative. “Not only is he well-regarded by his base, he has a favourable image among supporters of the Liberals, the Bloc, Greens and the unaligned. Even Conservatives have almost as high favourable as unfavourable views.”

Bloc Québécois Leader Yves-François Blanchet—also seen as having a great outing in the debate—now ranks second in overall public perception, at +11 per cent, and that too is a big improvement from the -4 per cent he had when the campaign started. Blanchet did “particularly well” with people who watched the debate as opposed to just hearing about it, Lyle notes, which bodes well for him in the French debate tonight.

Green Party Leader Elizabeth May ties with Blanchet at +11 per cent, and her ratings haven’t shifted much through the campaign.

Conservative Leader Andrew Scheer is next, with a negative net favourable rating of -9 per cent, and some of that seems to be due to pundit consensus that he had a weak outing in the English-language debate. “Scheer is clearly being hurt by coverage compared to those who actually saw the debate,” Lyle says. “He has good support to his base and some with the People’s Party of Canada, but other partisan segments view him negatively, including the unaligned.”

Liberal Leader Justin Trudeau earns a -11 per cent rating, which is roughly where he’s hovered over the last few months, but that is a significant tumble from the +5 per cent he enjoyed pre-SNC-Lavalin implosion. And, interesting, his performance in the English debate does not seem to have done him any favours. “Trudeau has more negatives among those who actually saw the debate,” Lyle notes, adding that while Trudeau has strong appeal among Liberal partisans, supporters of every other party dislike him.

Maxime Bernier, on the other hand, “remains in the basement,” Lyle says. The PPC leader’s net-favourable is -31 per cent, and it seems people who saw the debate are divided on what effect he had on their opinions. “While Bernier’s negatives are higher among debate viewers, so are his positives,” the pollster says, adding that PPC loyalists love Bernier, but supporters of most other parties don’t like him.

The poll also asked people who they thought would make the best prime minister, and there, too, Singh’s numbers have been on a steady upward march. In mid-September, shortly after the campaign launched, he earned 11 per cent of the votes for best PM, but in the latest tally, he’s climbed to 18 per cent.

Trudeau still leads on that question, at 35 per cent to Scheer’s 30 per cent, but Trudeau’s PM quotient has fallen slightly over the course of the campaign, from 38 per cent, while Scheer’s has remained precisely flat and stable. Nine per cent pick May as the best would-be prime minister, followed by Bernier at five and three per cent of Canadians who pick Blanchet.

The poll results are based on a representative sample of the Canadian population including 1,726 people in an online survey, but because of the methodology, a margin of error does not apply.