Is dictating what former ambassadors can say about China a thing now? 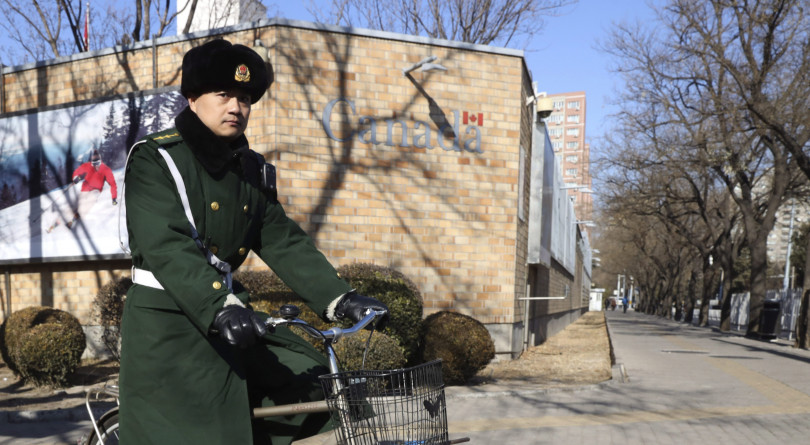 Message control: Has Justin Trudeau let the “basic dictatorship” thing go to his head? According to two former ambassadors to China the Prime Minister’s Office, through Global Affairs Canada,  called on them to clear all public comments about China with the government first. The reason? The PMO wants Canada speaking with “one voice” on the subject. Oh, and because of the “election environment.” (Globe and Mail)

The Globe first reported that David Mulroney received a call from a Global Affairs official last Friday. Mulroney has recently cautioned Canadians about traveling to the “repressive detention state.” Then the newspaper followed up with a report that  Guy Saint-Jacques got a similar call, which he said was odd since the topic was an authoritarian state, “especially having served in China and how they try to control messaging there.”

Both the PMO and Global Affairs are now scrambling to distance Trudeau’s office from the calls, with both saying the PMO issued no such directive, even though that’s how it was put to the two ambassadors.

Bully tactics: Canadians are overwhelmingly of the opinion that China is pushing their country around, according to a new poll by Abacus Data. Three quarters feel that way, and it’s more or less the same across party lines. As to how Canada should respond, that’s different. Seventy per cent of Liberal supporters say Canada should continue to work quietly behind the scenes to resolve the dispute and free two Canadian held by China in retaliation for the arrest of Huawei executive Meng Wanzhou. But only 56 per cent of Conservative voters feel that way, with the rest saying Canada should loudly protest China’s behaviour. (Huffington Post)

Canada’s Brexit plan: Staying with Canadian international relations for a moment, Boris Johnson is now officially the Prime Minister of the United Kingdom, and that means rocky times ahead for Canada, especially with Johnson’s pledge to quit the European Union on Oct. 31 with or without a deal. “If Britain crashes out of the EU without an agreement, Canada’s trade in goods and services will almost certainly suffer not only because of the adverse economic consequences for Britain, our largest export market in the EU, but also for the rest of Europe,” Fen Hampson of the Norman Paterson School of International Affairs at Carleton University told the Canadian Press. “We clearly have an interest in a properly managed Brexit scenario.” (Canadian Press)

Broken telephone: For the Ontario Progressive Conservatives Ghada Melek‘s tweets and retweets from three years ago about Muslim extremism were enough for them to reject her candidacy for the 2018 election. Apparently nobody told the federal Conservatives, who selected Melek to run for them in the Toronto riding of Mississauga-Streetsville. Melek told the National Post she wasn’t rejected, and instead quit, but two people with the provincial party said her social media posts triggered her rejection. “Why the federal party would be rolling that dice is beyond me,” one of the people told the paper anonymously. “(If) they don’t want to consult, it’s on them.” (National Post)

Summer reading: While this fall’s election campaign is unfolding, former attorney general Jody Wilson-Raybould plans to release a book devoted to Canada’s relationship with Indigenous peoples. Wilson-Raybould, who was at the centre of the Trudeau Liberals’ SNC-Lavalin controversy after she refused to intervene in the company’s corruption case and then resigned, is running as an independent candidate in B.C.’s Vancouver-Granville riding. The book, From Where I Stand, will touch on the SNC-Lavalin affair, but will focus mostly on reconciliation. From the publisher’s press release: “In this powerful book, Jody Wilson-Raybould draws on her speeches and other writings to argue that true reconciliation will occur only when Canada moves beyond denial, recognizes Indigenous rights and replaces the Indian Act. The good news is that there are solutions. Now it is time to act, to end the legacy of colonialism and replace it with a future built on foundations of trust, cooperation and Indigenous self-government.” (CBC News)

As it happens, the Globe is out with a long read of its own, published late last night, that looks at how SNC spent years fighting for a deferred prosecution law that would help it avoid a criminal conviction, but why it “lost the battle to use it.” (Globe and Mail)

Hit and miss: Some Trudeau appointments the NDP likes. Some, not so much. After the Prime Minister named outgoing NDP MP Murray Rankin to chair Canada’s new national security-review agency, the NDP hailed the appointment: “Canada’s NDP Caucus has the utmost confidence in Murray Rankin, and we are pleased that an aspect of our nation’s security will be in his capable hands.” The party took a considerably different tone earlier in the day after Trudeau appointed a Royal Bank of Canada executive, Tony Loffreda, to the Senate on Tuesday: “Justin Trudeau, once again, showed whose side he’s on by appointing a senior person in the banking sector. … It’s simple: his priority is working for the richest, not for the rest of us.”(Canadian Press on Rankin, CBC News on Loffreda)