Is that a Conservative campaigner calling, or a recording?

Stephen Maher: The party is using pre-recorded voice actors and a controversial technology that the Liberals abandoned at the last moment 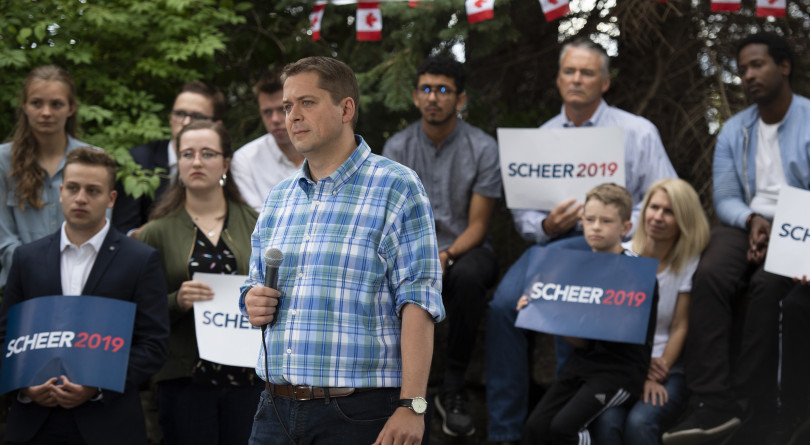 Scheer listens to questions during a campaign event in Ottawa on Sept. 14, 2019 (THE CANADIAN PRESS/Justin Tang)

If you get a call from the Conservative Party during this election, you will likely be hearing a voice that was recorded some time ago, being played by a call-centre employee sitting at a keyboard.

The party is using recordings of voice actors in its voter-identification and fundraising calls, a technology that simulates the experience of talking with a real person, so voters who receive these calls may not realize they are talking to a recording.

“We regularly reach out to our supporters and over the past several years have made use of a live agent technology that allows live agents to use pre-recorded responses that ensures information provided to call-recipients remains accurate,” says party spokesman Cory Hann in an email.

Not everyone likes the technology. During the election in Alberta in April, when the United Conservative Party was using the technology, the party was embarrassed by a story about one call that seemed to show the problems with the technology. Kyle Hamilton, a 28-year-old NDP volunteer, twigged to the nature of the call when he put questions to the live agent that the system couldn’t answer.

“Can you do me a favour and say ‘carrot’?” asked Hamilton.

“No problem,” said the recording, before reverting to scripted responses.

“So, you’re actually a recording aren’t you?” Hamilton said.

“Oh goodness, do I sound that bad?”

“Ha ha ha. I am a live agent but I just used scripted responses to ensure the information I provide is accurate and for quality assurance.”

“Can you say carrot?”

In a second call, which Hamilton also recorded, the live agent actually denied that Hamilton was talking to a recording.”So you’re not a recording?” asked Hamilton

“No,” replied the recording.

Responsive Marketing Group has been using the technology in political calls for Canadian conservative parties since 2014, and will be doing calling for the Conservatives in this election. It allows an individual agent in a call centre to handle several calls at once, reducing the cost of the telephone campaigns that the party relies on to find their supporters and remind them to vote on election day.

The Ontario Progressive Conservatives used the service for fundraising calls during the Ontario election in June, leading to complaints from some organizers, who dislike the technology.

The federal Conservatives have long relied on RMG to carry out fundraising, voter-identification and get-out-the-vote calls. In the 2015 election, Elections Canada filings show, the party spent $5.1 million on such calls, compared with the Liberals, who spend $436,000.

In the 2011 election, non-Conservative supporters across Canada reported receiving calls from RMG call centres directing them to the wrong polling station, leading to accusations that the party was doing so purposely. An Elections Canada investigation ultimately found no evidence for that.

The company has adjusted its approach since the Alberta election to avoid accusations that the technology is deceptive. “There is a live agent on every call at all times; nothing happens without the direction of the live agent,” the company said in an email. “The technology simply plays a supporting role to ensure the information provided to call-recipients remains accurate and is delivered clearly. To further enhance transparency we now include a phrase, at the start of all calls, that it is a recorded call.”

The company says that if someone asks, as Hamilton did, if they are talking to a robot, agents are directed to play a recording that does not deny it, the company said in an email.

“Agents using Live Call Assist are expected to respond to such an inquiry with the following ‘I am a live agent but I just use scripted responses to ensure the information I provide is accurate and for quality assurance’ or ‘You are interacting with a live person, but I am using technology that helps with quality control.’ “

The Liberals also planned to use a similar technology in this election but decided to give it a pass at the last minute.

In an Aug. 2 email to organizers across the country obtained by Maclean’s, the party encouraged local campaigns to sign up for the Riding Research Program, a service offered by Data Sciences Inc., a company owned by Tom Pitfield, the party’s digital director.

“Persona is a pre-recorded survey dialogue recorded by a voice actor, played at the exact right time by a live interview operator,” said the email pitch. “To respondents, this tool sounds and responds just like a real interviewer. For us, bulk rates on Persona technology means we can conduct higher quality interviews than would otherwise possible at this price point: no wait times between questions, and all questions and names are pronounced clearly and correctly. Calls are shorter, and more precise which leads to greater opt-in.”

Sometime in the last month, though, the party decided not to use the service.

“Ultimately, the Liberal Party did not choose to proceed with the technology that you’ve referenced,” said party spokesman Braeden Caley in an email. Neither he nor the company would say why they decided against it at the last minute.

“You are correct to note that we are not using ‘Persona’—it was presented to us by a vendor, but not ultimately used,” said Sébastien Fassier, vice-president of Data Sciences.

Hamilton, the NDP volunteer who recorded the carrot call, said he doesn’t think any parties should use the technology. “In my opinion it is intentionally deceitful,” he said in an interview.