Universal daycare is almost certainly good for the economy. But what about the children who actually use it? 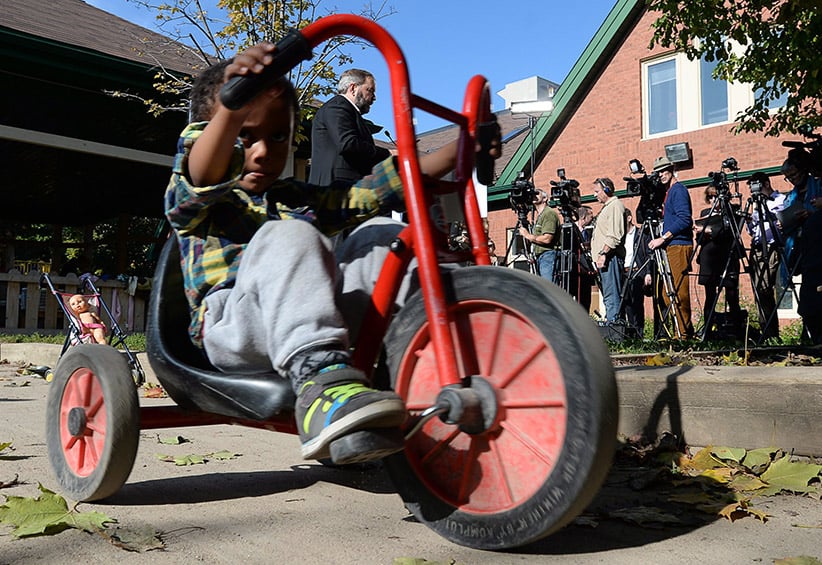 Child care remains one of the most polarizing issues of the federal election. With his competitors promising child benefit cheques of varying sizes, NDP Leader Tom Mulcair has distinguished himself with a vow to create one million $15-a-day daycare spaces, in concert with the provinces. “That’s not just good for families. That’s good for the economy as well,” he boasted during the Maclean’s National Leaders Debate in August.

Mulcair is undoubtedly correct. Massive public subsidization of daycare will certainly ease the financial burden on many families with young children. And by increasing workforce participation among new mothers, such a move can be expected to boost GDP as well as government coffers. Quebec research suggests the province’s universal $7-a-day daycare program has led to a rapid increase in female employment, plus every dollar spent on daycare subsidies generates $1.50 in additional government revenue. In the midst of an election, however, it seems appropriate to spend some time contemplating the impact universal daycare might have on those among us who can’t vote—and may not even be able to walk or talk—but who will nonetheless feel the effects of this policy most dearly. Is universal daycare a good deal for Canada’s children?

Advocates of universal daycare, as well as full-day kindergarten, once promoted the concept on the basis it gave young participants a measurable benefit in cognitive skills (i.e. reading, writing and math) over their peers. However, numerous studies have concluded that while there may be a short burst of improvement in test scores for children in these programs, any gain tends to “wash out” by early grade school. Over the long run, there’s no noticeable difference between the test scores of children who attend daycare or full-day kindergarten, and those who don’t.

With these results firmly established, academic focus has shifted to the role daycare plays in building non-cognitive advantages. Non-cognitive skills comprise such things as the ability to control impulses, risk-taking and emotional stability—all significant factors in determining lifelong success. The famous HighScope Perry Preschool Study, which examined the effect of intensive early education intervention on 58 low-income children in Ypsilanti, Mich., is widely cited as proof universal daycare improves social skills. Every tax dollar spent on the program returned $13 in savings to society due to lower welfare costs and jail time over the subjects’ lives. Perry Preschool’s success in reducing criminality was widely cited in the promotion of Ontario’s recent rollout of full-day kindergarten.

New research released last week, however, roils claims that such results are applicable to universal programs. What works well helping a narrow selection of disadvantaged children may produce confounding results when applied to the population as a whole, according to the work of economists Kevin Milligan of the University of British Columbia, Michael Baker of the University of Toronto and Jonathan Gruber at the Massachusetts Institute of Technology. This trio previously examined data on Quebec’s daycare program and found that children enrolled displayed poorer non-cognitive results—including greater anxiety, hyperactivity and aggressiveness−than their peers. Their new study tracks the effect of Quebec’s program on children who have since graduated from daycare. The news doesn’t get any better.

“The negative impact of the Quebec program on the non-cognitive outcomes of young children appears to persist and grow as they reach school ages,” the economists report. This result is strongest for boys aged 5 to 9. Among teenagers, self-reported health and life satisfaction are significantly lower for former daycare attendees. More problematic, their research uncovers “striking evidence” that universal daycare is linked to a greater propensity to criminal behaviour. “Exposure to the Quebec program leads to higher rates of crime” when compared to other Canadian children. The authors call their results “a mirror-image of the Perry Preschool.” It’s a serious defect in the promise of universal daycare.

Many Canadian families choose formal child care over other options because it works best for their individual situation. This is as it should be. But a national, universal child care program will permanently alter such calculations. The promise of cheap government-provided daycare will inevitably lead to much greater use of non-parental care than would otherwise be the case. While this offers tangible benefits to the economy and government revenues, as has been the case in Quebec, these advantages have to be weighed against new concerns about potential negative consequences for children. Any debate over universal daycare must put this crucial trade-off front and centre.