Jagmeet Singh gets the boot, but doesn't back down

Politics Insider for June 18: Canada goes down to embarrassing defeat in New York City, Jagmeet Singh lashes out at the Bloc and the Tories debate in French 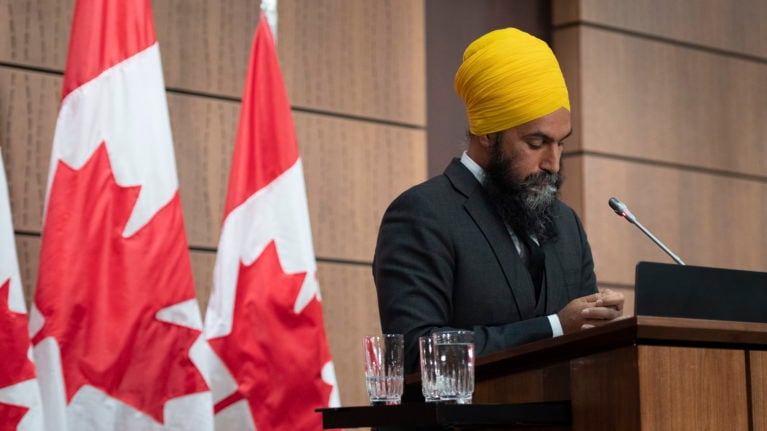 NDP Leader Jagmeet Singh participates in a news conference after he was ordered removed from the House of Commons for calling another MP racist, on Parliament Hill in Ottawa, on Wednesday, June 17, 2020. (Justin Tang/CP)

Let’s get the news out of New York out of the way first. Canada lost its bid for a temporary seat on the UN security council, and it wasn’t close. Prime Minister Justin Trudeau‘s weeks-long phone campaign to persuade world leaders fell short. In the Western Europe and Others group, where two seats were up for grabs, Norway scored 130 votes and Ireland was close behind at 128. Canada, the “other” contender, received 108 votes.

Stephanie Carvin, a Carleton University prof and former national security analyst, called the loss to Ireland, a much smaller country, “embarrassing.” Carvin’s diagnosis: “That is how far we are punching below our weight. There is a lesson here but we will not learn it.” David Mulroney, a harsh China critic and former ambassador in Beijing who admittedly “wasn’t a fan of the UN bid,” said he was still “sorry we came up short.” Mulroney’s advice: “careful listening and courageous honesty.”

Jenni Byrne, a longtime Harper adviser, mocked the loss and pointed out that her boss secured more votes the last time Canada fell short in 2010. (The official record of that election, in which Canada lost to Germany and Portugal, has the proof.) Gerald Butts, the former PMO confidant, simply thanked public servants for their work. Pierre Poilievre, perhaps the Tory MP happiest to take a swipe at Liberals, did his thing.

Canada’s (at the) back! Paul Wells rummaged through the detritus of defeat, assessing the Liberal failure to achieve an admirable goal that was never, ever the foregone conclusion some Liberals might have imagined.

“Canada simply doesn’t look like an underdog anywhere in the world if you’re not Canadian. It looks like a huge, rich, lazy country that could almost always stand to be taken down a peg. The Canadian delegation was, in the home stretch, reduced to arguing that in a crisis, it might be a good idea for the world’s (real) underdogs to ‘have another G7 country at the table.’ I have a hard time believing that was a big vote-winner. ‘Give Privilege a Chance’ just doesn’t feel like it resonates.”

Why Canada fails time and again on the world stage: Scott Gilmore, a former diplomat who knows something of how the UN operates, found the Loss in New York to reflect Canada’s withered global influence. Canadians don’t typically care about foreign policy when elections come ’round, he writes, and eventually the country will pay the price when a truly awful emergency come knocking.

“Canada’s turn will inevitably come. And when our real geopolitical crisis finally arrives, it will be ugly and traumatic as we collectively realize how many decades were wasted, and how little diplomatic muscle we have to claw our way back the day our luck runs out.”

NDP leader Jagmeet Singh was booted from the Commons yesterday for calling a Bloc Québécois MP, Alain Therrien, “racist” for not supporting an NDP motion that served up four specific ways the feds could fight hate crimes and racism. The Bloc complained that the comment was defamatory (which wasn’t true, given the privilege afforded MPs in the chamber), but Singh repeated the word at a press conference anyway—as part of an emotional plea to MPs to support the motion.

An “unparliamentary” anniversary: MPs don’t call each other racist every day, but it’s far from unprecedented. John Cannis, a Liberal MP in 1997, called Reform MP Darrell Stinson racist, as recorded by Hansard. Stinson took exception to the slight, and cameras rolled for his spitting-mad rejoinder. Ten years earlier, NDP MP Ernie Epp called then-immigration minister Benoit Bouchard racist before swiftly withdrawing the comment. Just a year after that, fiery Liberal MP Sheila Copps accused the Mulroney government of governing “in a racist way.” The Tories objected, Copps defended herself, and the speaker sided with Copps. The date of that particular kerfuffle was June 17, 1988.

This is also important news! Finance Minister Bill Morneau will release a so-called “economic and fiscal snapshot” on July 8. Morneau’s planning to “provide information on the current state of the economy,” but beyond that wouldn’t offer much detail on what’s to come. The opposition—and more than likely a good chunk of taxpaying Canadians—are none too pleased about the lack of a more comprehensive economic plan.

This is also important news! Four Conservative leadership hopefuls took to the stage for a French-language debate last night. None of the four is particularly confident in their second language, though Peter MacKay’s French has noticeably improved, writes Maclean’s Marie-Danielle Smith. The debate was, as a result, light on policy discussion, but still important.

“Having at least some grasp of French is a priority to voters… And that should matter to these candidates not just because they may one day hope to become prime minister, but because their ability to become Conservative leader will be heavily affected by how Quebec’s Tories choose to vote.”

This newsletter constantly references the work of Yves Giroux, the parliamentary budget officer. But it’s only because Giroux’s team keeps publishing reports no one should ignore. Yesterday, the PBO published an analysis of federal infrastructure spending and another on family wealth distribution. The first report found the feds have spent $2 billion less than planned on infrastructure, and that provinces haven’t kept up with the spending. The PBO also had incomplete data for thousands of projects.

The PBO’s report on wealth tried to build a database for the top tier of wealthy Canadians. You’ll see repeated references to the annual list of Canada’s richest people published until 2018. (The PBO referenced the 2017 package.)

The Award for Most Earnest goes to… Sherra Profit, whose surname carries a certain irony given her position, as she leaves what might be the most thankless job in government: the taxpayers’ ombudsman. In her final annual report, where Profit reflects on her time in the role, look for the graphic that illustrates the difference between equality, equity and fairness. Top marks for a bureaucratic sense of fair play.