The NDP leader won the Burnaby South byelection on Monday, regaining his grip on a party that had appeared to be losing faith in him 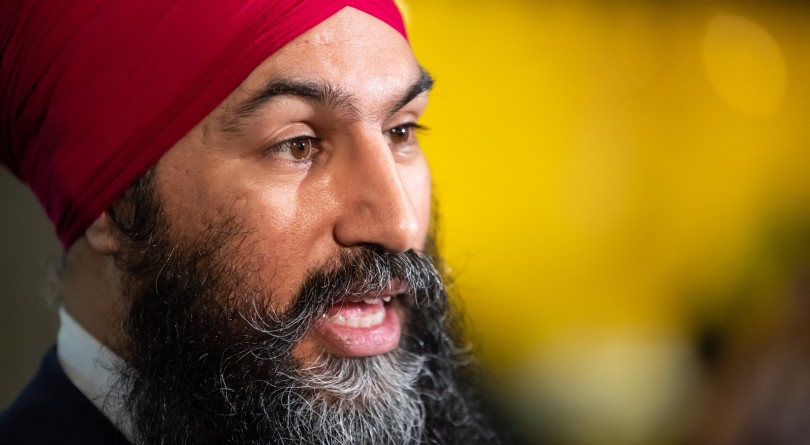 NDP Leader Jagmeet Singh responds to questions while campaigning for the federal by-election in Burnaby, B.C., on Sunday, Feb. 24, 2019. (THE CANADIAN PRESS/Darryl Dyck)

NDP Leader Jagmeet Singh has won his do-or-die bid to capture a British Columbia seat in the House of Commons.

With more than half the polls reporting results in Burnaby South, Singh had just over 38 per cent of the vote, comfortably ahead of Liberal Richard T. Lee’s 26 per cent and Conservative Jay Shin’s 22 per cent.

But while victory tightens Singh’s shaky grip on the reins of the NDP, the challenge ahead was underscored by the simultaneous loss of the Montreal riding that launched the NDP’s orange wave that swept Quebec in 2011.

In Outremont, Liberal contender Rachel Bendayan held more than 42 per cent of the vote with two-thirds of the riding’s polls reporting results, with the NDP’s Julia Sanchez running second with just over 25 per cent.

Outremont was a longtime Liberal stronghold until 2007, when former NDP leader Tom Mulcair scored an upset byelection victory for the NDP, creating a beachhead for the New Democrats that helped them launch their 2011 sweep of Quebec and vault them into official Opposition status for the first time in party history.

The Conservatives, meanwhile, easily hung onto the Ontario riding of York-Simcoe.

Conservative candidate Scot Davidson captured just over 50 per cent of the vote with a majority of polls reporting results, with Liberal Shaun Tanaka taking 31 per cent.