Election Image of the Day: The NDP leader meant to poke holes in Liberal and Conservative records on climate change. But his props were lacking somewhat in production value. 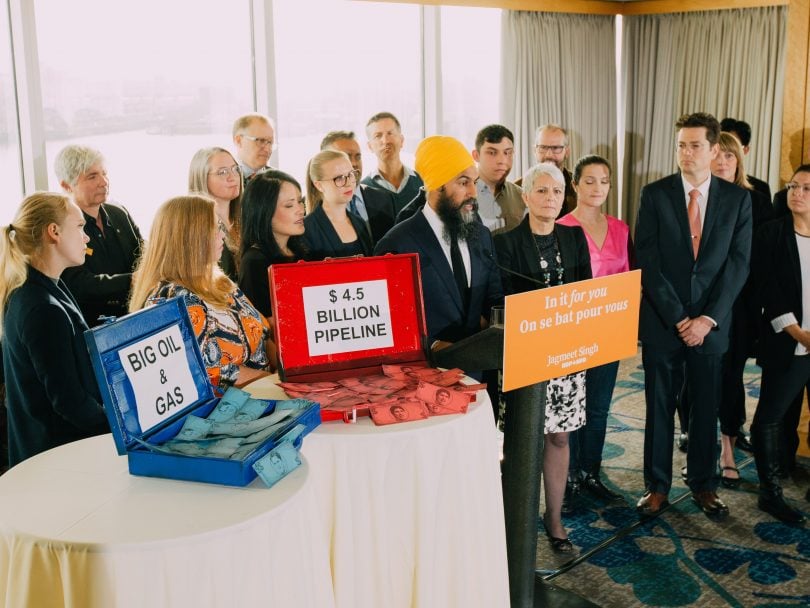 Ask any member of the NDP, and they’ll tell you Andrew Scheer won’t combat climate change—he’s in the pocket of big oil and gas. And Justin Trudeau? The man spent $4.5 billion keeping a pipeline alive! The message is implicit: both main parties are tainted by greed, and only the pure, uncorrupted (read: untested) orange team can lead Canada to a cleaner future. To illustrate this point in Vancouver today, NDP leader Jagmeet Singh stood behind a bright orange placard reading “In it for you,” and beside two large briefcases, ossified by spray paint, bearing seemingly last-minute signs printed on 8.5×11 sheets of paper saying “BIG OIL & GAS” (for the Tories) and “$4.5 BILLION PIPELINE” (for the Grits). The signs are surprisingly cheap considering the measures Singh’s team took to fill the toyland briefcases with dozens of bills of funny money emblazoned with his competitors’ faces. It’s more than a little crude, but also a little confusing—who’s the target audience here? Which undecided voter would see this image and be convinced Singh’s the right man for the job? Astute readers, too, will note that one cartoon colour escaped criticism: the Green party, and its presumptive bills of Elizabeth May’s mug, are nowhere to be seen. Maybe Singh doesn’t see May as a threat, or maybe her shade of environmental green is just a little too hard for them criticize.