Justin Trudeau and the antiracism trap

Sarmishta Subramanian: If inequality and a fair chance for all are our underlying concerns, the uproar about Trudeau's brownface photos is just a sideshow 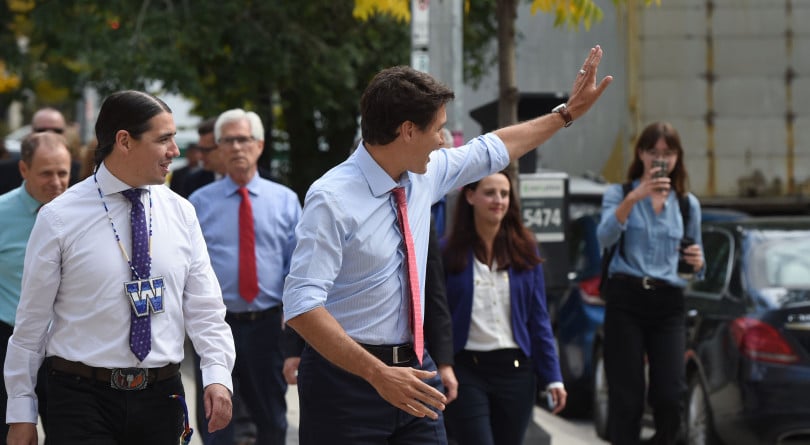 Trudeau campaigns in downtown Winnipeg on Sept. 19, 2019, in the midst of his brownface scandal (THE CANADIAN PRESS/Sean Kilpatrick)

Maybe because of the nature of election campaigns, maybe because of the now-familiar rhythms of public-shaming stories, the path of the Justin Trudeau Brownface Circus followed a certain recognizable pattern: the multiplying photo and video evidence. The faux outrage from Trudeau critics who have never cared so much about racism or cultural exploitation as they suddenly do now. The doublethink from Trudeau loyalists whose powerful central processing units have almost instantly absorbed the revelations, digested any confusing emotions, and arrived at a conclusive rationalization: #it’sthemedia! Like hardline Republican supporters of Donald Trump, they’re standing by their man.

Not long afterward came the more reflective but equally inevitable moral-of-the-story explanations: This is not about Justin Trudeau’s racism; it’s about everyone’s racism. It’s about the sea of structural racism in which we are all burning (mixed metaphor absolutely intended—the apocalypse is no time to be mucking about with metaphors.) Racism is in the air we breathe, the water we drink, that counter on which you just set down your coffee, jaw agape, after viewing the excusive third Justin Trudeau video.

Let’s get this out of the way. Is Trudeau actually a racist? I doubt that, at least in any differentiating sense of the word. If, as a growing cluster of scholars and activists now argue, everyone is a racist and the only way to not be one is to actively fight for antiracism by opposing all structures that perpetuate racist thought (Barack Obama, by this measure, could be considered a racist, Kelefa Sanneh pointed out), Trudeau is no worse than any of us, and arguably quite a bit better than most. (What have I done for antiracism lately?)

Our PM doesn’t seem a racist by a less expansive definition either. He has helped bring many non-white people into government, and put in place some policies, at least, that have helped people from other countries, and of other races, build a better life in Canada. Whether that is owing to principle or shrewd political strategy, the result is the same: a betterment, rather than worsening, of their prospects. This suggests his performance in other areas, such the Indigenous file, is also likely not explained away by racism.

So is the problem, as some are saying, that we are all racist? Brownfacegate doesn’t impel me to tar all of my fellow citizens with the same makeup brush, particularly when that argument was also suggested by the fellow at the centre of this mess. “Canada is the best [country] in the world but we have a lot more work to do, all of us,” Trudeau said at a press conference yesterday, apparently trying to tether the rest of the country to his teetering bandwagon.

Of course we are all capable of views that don’t flatter us, and of course the structures we have created are not exactly paragons of equality and racial justice. I’m just not sure that a diagnosis of ubiquitous and pervasive racism solves any of the impediments created by those structures, and the very real problems faced by disadvantaged people, including disadvantaged minorities.

I share the urge to understand why the adult son of a former prime minister, living and working in a large and diverse Canadian city, was cavorting about in brownface and blackface, and not once, or even twice (you’ll note I’m not committing to a very specific number). Even someone with a flair for drama (remember this flight of stairs?), certain of his own benign intentions, would surely consider that he might be viewed in a negative light by others. So I can’t help wonder if the reason Trudeau went ahead had more to do with privilege than underlying xenophobia.

As others have pointed out, most people by 2001 (the year of 9/11, remember) were aware that it was not okay to go around dressing up as a racial caricature, and that it might actually be a liability—particularly at a work party. A work party! To ignore that, or not consider it, would require having a certain comfort in your place in society, a level of financial security, a sense that you would be listened to, and properly understood, and given the benefit of the doubt. There are many people of certain social strata, living in certain parts of many cities, who can assume in fact that they won’t get the benefit of the doubt. Race often intersects with that underprivilege, thought it’s not always a requisite.

“I have always acknowledged that I come from a place of privilege but I now need to acknowledge that that comes with a massive blind spot,” Trudeau said at yesterday’s press conference. But the trouble with blind spots is that you don’t always know where they are, and acknowledging them isn’t an inoculation—in fact, it may make you more vulnerable to missing the ones you’re not aware of. That’s true for a future prime minister, but also anyone else.

My fear is that this incident is going to galvanize a national hair-shirt extravaganza: more outings of past racist indiscretions, more confessions and apologies, more discussion of race, more hypersensitivity around racism, more meaningless acknowledgement of blind spots and white privilege. I say meaningless not because genuine reflection around these questions isn’t important or productive, but because ritual shaming and sacrifice is unlikely to produce any enduring change for the people who most need it.

Here is a startling idea. Not every person of colour was offended by Trudeau’s brownface pictures. We all know of many who were. Anecdotal evidence, entirely, but I’ve also spoken to a good many who weren’t. One of the Sikh men who posed with Trudeau in the West Point Grey High School photo told media he didn’t see the harm in it. It may be that these people could afford the luxury of not being offended—perhaps their generally comfortable socioeconomic positions have sheltered them from racism’s most pernicious effects. Or perhaps it’s personal outlook or cultural history, or something else. I couldn’t say the same for the blackface photo—an entirely different phenomenon with a long and deep and nasty history that still casts shadows.

In any case, it was obviously not a good thing that the PM dressed as a racial caricature on multiple occasions. But if inequality and a fair chance for all are our underlying concerns—or matter at all—brownfacegate is a sideshow. Casual racism sucks. Microaggressions are lousy and undermining. I hate it too when the barista blinks dumbly when I tell her my name. But you know what’s much worse? The macroaggressions of income inequality, inequality of opportunity, discrimination when you apply for a job or an apartment. Race is an undeniable factor in those things, but the problem is equally socioeconomic. The people most materially affected by racism are at the bottom of the socioeconomic pyramid, and no amount of self-flagellation or worldly self-awareness of privilege is going to help them.

We don’t have to choose between race and socioeconomics, but zeroing in on the racism question is bound to produce racism answers. It’s the approach Trudeau himself has embraced, because after all it’s a relatively easy fix. It’s much harder to solve all the other problems that keep people on the social, economic and political fringes.

There is an ad campaign running currently on Toronto Transit Commission trains and buses. Here’s one ad: “Jeff has $6. If the bus to and from school costs $4 and school lunch costs $5, how many years will Jeff depend on social assistance?” In another version, Mary has multiple essays due the next day and no computer at home. If the public library closes soon, the ad asks, what will her city’s crime rate be in the future?

I don’t know what Jeff or Mary look like, as Pathways to Education, the nonprofit running the campaign, has wisely chosen to run a text campaign that catches the eye (and the heart) without raising questions about representation or racial or gender marginalization. That ad in 20 or so words reminds many TTC-goers of all the big and small things they take for granted. Kids without access to those things become adults with fewer resources and options, with costs to society as well as to themselves and their families.

Moments like this one give us a chance for self-reflection. It’s up to us which things we reflect on. Of course we should talk about racism. But fixating on a baroque and well-honed discourse of symbolic racism unfortunately does little on its own to change the economic and social impediments to progress faced by the Jeffs and Marys of the world, or by their parents. The core issue is money, resources, equal access to opportunity. We should stay focused on how to achieve that.