Abolishing Canada's upper chamber of 'sober second thought' will be hard, maybe even impossible. But we have to try, writes Scott Gilmore. 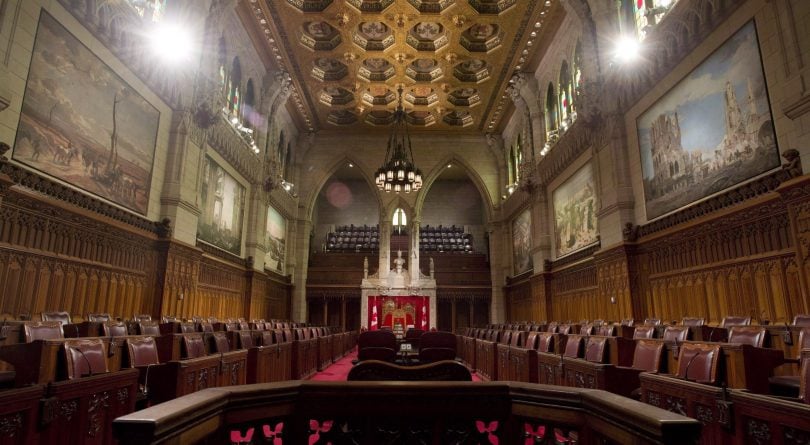 The Senate of Canada (THE CANADIAN PRESS/Adrian Wyld)

Compared to everything else that fills our lives, Canadians do not worry about politics. In theory, the governing of this nation should be something that commands attention. In practice, the country shuffles along, led by a rotating few who occasionally stumble or misstep, but who can nonetheless be trusted to move us gradually forward.

But today is different. Something seemingly inconsequential and obscure is unfolding in Parliament that should cause every single citizen to look up and bark in anger.

It is expected that this evening the Senate of Canada will vote against the bill legalizing marijuana. This is happening for a variety of reasons. The Conservative senators are opposed to the proposed law on principle. And, because many of them are travelling on what is euphemistically called “committee business,” there are not enough Liberal-appointed Senators in Ottawa to carry the vote in favour.

READ MORE: Why a more independent Senate is working better for Canadians

If the bill is defeated, the issue will be returned to the House and legalization will be delayed by several months at least. But, defeat will not ultimately prevent a bill. The government will eventually get their act together and manage the passage of a new law.

So, in matters pragmatic, this Senate vote means little. The implications, however, are significant and infuriating. The legalization of marijuana is an issue the elected government campaigned on, an explicit part of their mandate, one that has been exhaustively debated in the House of Commons. The senate, a once gelded monstrosity, is trying to thrust itself into the body politic. And if they succeed, we will need to get used to how that feels.

Even if you remain opposed to legalization, surely we can all agree (including the Conservative Party that will inevitably return to power in the future) that an unelected, unaccountable, and unknown group of appointees should not be able to overrule the will of a democratically elected government.

For 150 years, Canada has been able to largely ignore the cronies who sit atop our legislative system. This collection of has-beens or nobodies, distinguished primarily in their ability to curry favour with the government of the day, occupied themselves with busy work, attending debates no one cared about, or writing reports no one read.

I once testified at one of their committees. It was a farce. In between the rambling and pointless questions of the nodding senators, I counted dozens of staff sitting in the back and tried to calculate how many hours were being wasted by this pointless exercise. The resulting report changed nothing, advanced no cause, helped no one.

The Senate, to date, has been an expensive, but ultimately harmless, anachronism. Sure, it is embarrassing that Canada should spend so much time talking up the importance of democracy abroad, while tolerating such a ridiculous example of unaccountable government in our own parliamentary precinct. But for the most part, senators did nothing and therefore Canadians did not care.

Occasionally someone would notice the Senate existed, and would question how a democracy could still tolerate an unelected legislative body, Preston Manning being the most notable example. But to date, as a country, we have hesitated to do anything meaningful. It would require opening up the constitution, so why bother? The doddering fools just play make-believe MP and do no real harm.

Tonight, however, that changes. If the Senate defeats this bill, one passed by the elected House of Commons, legislators chosen by the Canadian people, it will have proven senators are a danger we can not tolerate as merely theoretical. The precedent will empower them to block future legislation that will matter. The specific issue is unimportant—it’s the vote itself that should infuriate us all.

As for the senators, if they had any self-awareness, or even a passing understanding of democracy, they should recognize how offensive it is that they feel they can override the House of Commons on even trivial matters.

READ MORE: How to modernize the Senate in 21 steps

I suspect that many of them understand this, at some level. Because how could anyone grow up in this country and still think it’s fine to accept a richly paid government appointment that (normally) has no purpose? I hope that some of them are ashamed enough to recognize history will not honour them for the time they wasted in the Senate. And that the continued existence of their office is an insult to every elected Canadian in this country, from city councillors to premiers, who fought hard to earn the vote and approval of the public, who understand they are accountable to these people, and who work tirelessly in their service.

If, by chance, this column crosses the path of some senator, then please understand you are a gangrenous vestigial limb that should have been amputated decades ago. The only honourable thing for you to do is resign.

And for the rest of us, today we do need to pay attention. This unfortunate anachronism has to end. Killing it will be hard, maybe even impossible. But we have to try. You can start right now by taking two minutes to call the Senate itself (1-800-267-7362), ask to speak to any senator, it doesn’t matter which, they are all equally unneeded. And tell them, one hundred and fifty years after Confederation, it’s time to go.

NOTE: An earlier version of this column mistakenly stated that defeating the bill would send it back to the House of Commons. It will in fact kill the legislation. Making the Senate’s actions even more contemptuous and indefensible.