Paul Wells: The leaders not only kept it civil, they aired some real differences on key topics, from China and the economy to SNC-Lavalin and Bill 21 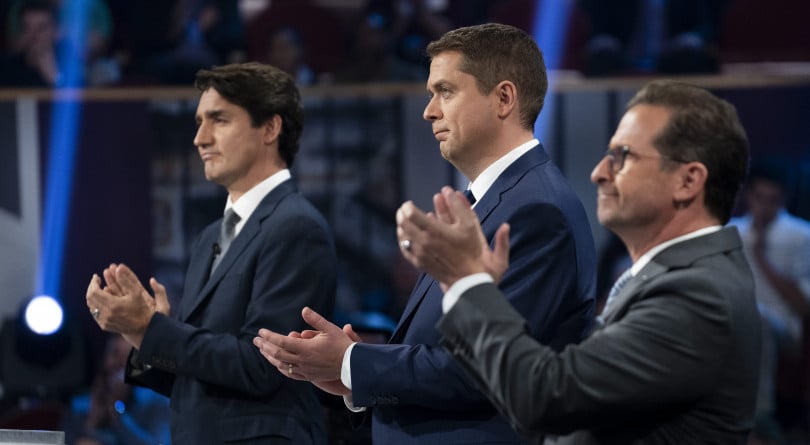 Trudeau, Scheer and Blanchet take part in the the federal leaders French language debate in Gatineau, Que., on Oct. 10, 2019 (THE CANADIAN PRESS/Chris Wattie)

Forgive me for talking shop at first. Thursday’s commission-certified French-language debate was the best-run of the four-ish debates this campaign has seen, and I suspect you’ll read the same conclusion from just about everyone who writes about it.

There are reasons for this.

Everyone is praising Patrice Roy, a Radio-Canada anchor and veteran broadcast professional who was the main leader-wrangler at the Museum of History in Gatineau. Properly so. But Roy was able to lead, clearly, while his colleagues from the French-language consortium took a secondary role, because he was the only broadcaster among them. (The others were Hélène Buzzetti from Le Devoir; Alec Castonguay from L’actualité; François Cardinal from La Presse; and Patricia Cloutier from Le Soleil.) Quebec’s main private broadcaster, TVA, sat this debate out and ran its own solid debate with a single moderator a week ago.

Monday’s English debate, on the other hand, was a broadcast traffic jam with the CBC, CTV and Global all represented. Since none of those organizations would cede any ground to the others, the last two participating organizations, the Toronto Star and Huffington Post, got equal treatment too. And things were a bit more chaotic.

On to the politicians. Conservative leader Andrew Scheer again stood out by refusing to play nice. He waited a bit longer this time. On Monday it took barely five minutes before he was calling Justin Trudeau a phoney and a fake. Here he waited more than a half hour before using the words menteur and mensonge—liar and lie—perhaps a dozen times in two minutes, again in reference to Trudeau. (Roy, the moderator, had asked why Scheer hasn’t tabled a costed platform yet, and Trudeau had taken the opportunity to say the Conservative platform is full of sops to the rich.)

I don’t find this kind of talk shocking, but as Scheer has already seen, there’s a quantum of risk involved: audiences have the right to judge the target but they may prefer to judge the mud-slinger. And the harder you push, the more you risk pleasing only the people who were already certain to vote for you.

Maybe Scheer had these strategic considerations in mind; maybe he just needed to vent; maybe French is still a cumbersome enough vehicle for him that he can’t steer it with greater precision. Certainly, Trudeau felt no particular need to charge as hard at Scheer. The Liberal leader was cool as a cucumber, docile when Roy cut him off. I think he went into the night with a minimal sense of his mission: make the points you can, don’t sweat missed opportunities, don’t push. Prime ministerial, one could almost say. He has been trying other tones since his teen years, ahem, so maybe it was time to try this one.

In terms of content, two issues particular to Quebec dominated the debate. Not that it was as resolutely navel-gazing as these things sometimes are: there were also good exchanges on medically-assisted dying, China and the economy in general. But this debate also saw the campaign’s best exchange on SNC-Lavalin. Roy asked a simple question: do the leaders want the special out-of-court deal for Lavalin that so many of Trudeau’s aides urged on Jody Wilson-Raybould? Trudeau, of course, believes the lurid spectacle of last spring was the only way things could have been handled. Yves-François Blanchet was adamant that Lavalin must be spared a trial. The rest want the company to go to trial.

On this, Scheer was the clearest I’ve heard, and it came as a relief: when Blanchet called SNC-Lavalin a “jewel” of the Quebec economy, Scheer countered that another jewel of life in Canada is the rule of law, and that the decision on whether Lavalin faces a trial “must stay with the Attorney General.” I’d have rather he said it should stay with the public prosecutor, especially given Trudeau’s flexibility about who serves as attorney general. But this was encouraging clarity from Scheer.

The latest of many, many exchanges on Bill 21, the Quebec law that says teachers mustn’t dress like Jagmeet Singh, was as tense and inconclusive as its predecessors. Singh wants to change hearts, not take the law to court (“Yes, I wear a turban, but I share your values”). Trudeau won’t intervene now but might later. May—whose halting French sounded good to me but seems, judging from social-media comments, to have been wearying for many francophone listeners—spoke for the many viewers who may by now be fed up with this game of tiny differences in position. “This is not an issue for a federal election, but we’ve now debated it more than we have the climate crisis,” she said. “That worries me.”

Maxime Bernier, leader of the Maxime Bernier Party, was at last in his element. He wasn’t invited to the TVA or Maclean’s debates, he’s seriously not at ease in English so Monday was a bit of a write-off, but here he could say, cleanly and concisely… well, little that was memorable. He’s such a curious figure. In his head, and the heads of his critics, he’s a revolutionary. In person he went for long stretches without saying much different from the other leaders, but he’d intersperse those low-key remarks with sudden warnings that this or that other leader would ruin the economy, let the country be overrun, and so on. If there’s anyone left without an opinion on Bernier, I suspect his appearance would have left them more confused than anything.

You’ll be deluged over the next few days with polls suggesting that, after barely shifting for a month, the parties’ fortunes are now changing quickly and in surprising ways. Thursday’s debate may influence these new shifts, but it’s hard to say how. In the meantime, it was refreshing to hear leaders keep a civil tone while they aired real differences. This campaign hasn’t had many good nights, but this was one.