The Greens want electoral reform. It's no surprise why.

The Liberals promised to change the way we vote. At its biennial convention, the Green Party is making its case for proportional representation. 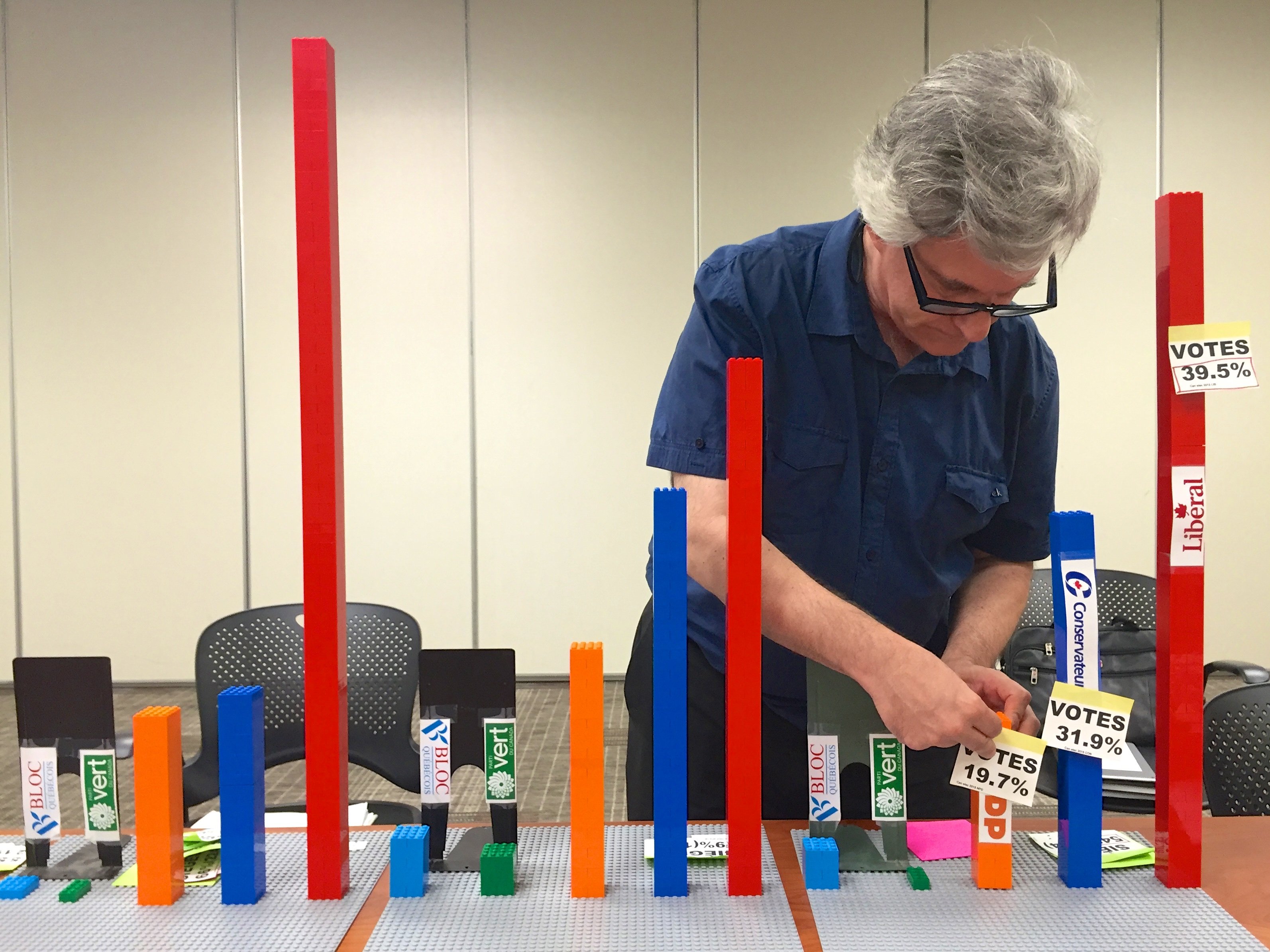 Daniel Green lays out six Ziploc bags of Lego blocks on a table in a downtown Ottawa hotel boardroom. Hundreds of blocks—enough to earn him a membership in the VIP Lego Club at the Lego Store in Montreal. The 61 year old isn’t building castles, or submarines, or homes for yellow-headed men. “This is Elections 101: Lego,” Green explains.

Green, deputy leader of the Green Party (and no, that didn’t involve a strategic name change), sets up a series of histogram-style dioramas using the blocks—a proportional, didactic look at how Canada’s five main parties fared in October’s federal election, and how they would have fared under different types of voting systems.

Green has made presentations like this for the past few months, hosting town halls throughout Quebec to make the case for electoral reform in the form of proportional representation. A second diorama shows a reduced red Liberal stack, a relatively stagnant blue Conservative stack, and an increase in the orange NDP, green Green, and light-blue Bloc Quebecois stacks.

“This,” he says, holding his hand over the proportional diorama, “is more democratic than this,” he says, moving his hand to the diorama illustrating the election’s first-past-the-post results. “It’s kind of a joke, because we say democracy is serious, but I will use a toy to talk about something serious. It’s a way to make it fun.”

On Saturday, Green will stack his blocks for fellow Green Party delegates and guests at the party’s biennial convention in Ottawa. His presentation is just one of many on the weekend that look at electoral reform.

MACLEAN’S EXPLAINS: What are Canada’s options on electoral reform?

The confab began Friday morning, a few hours before convention registration even opened. Elizabeth May, the party leader and its one and only elected MP, sat shoulder-to-shoulder with her New Zealand counterpart, James Shaw, to make a case for a proportional voting system at a press conference. Shaw, a Kiwi MP and co-leader of his own Green Party—the third largest party in that country—delivered the convention’s keynote address on Friday night.

This year marks the 20th anniversary of New Zealand’s first mixed-member proportional representation election. Shaw, appropriately wearing a green tie, was part of the campaign to bring about electoral reform in the 90s, and said he sees parallels between Canada now and New Zealand then. “In New Zealand, we had identical fears about the way [proportional voting] might turn out,” he said. “And none of them happened.”

Those fears include worries that electoral reform could produce unstable governments; that extremists could more easily get elected (“It’s tended toward centrism, because every single vote counts,” says Shaw); and that large parties could fade away (said Shaw: “There are still two dominant parties in our Parliament … and they still have a significant level of support”).

Shaw’s speech kicks off three, proportional-representation-heavy days in Ottawa. On the agenda: a workshop on proportional representation, a round-table session on proportional representation, and, of course, Daniel Green’s Lego presentation on PR—in French. That’s because the Green Party needs electoral reform in order to survive, and also what it needs to rack up more than one seat in the House of Commons. After the 2016 election, the Green Party’s federal council decided that electoral reform was the top the party’s top concern (though May said for her, climate change takes priority).

WATCH: Remember electoral reform? Here’s an update on that work.

In the most recent EKOS poll tracking support for different political parties, 5.9 per cent of the 1,003 Canadians surveyed said they would vote for the Green Party if a federal election was held tomorrow. If Canada had a proportional representation electoral system, that would translate into 20 seats for the Green Party, a nearly 20-fold increase from its current caucus of one.

Frank Graves, CEO of EKOS and a speaker at this weekend’s convention, said electoral reform is “absolutely critical” to the future of the Greens. “Green parties are doing very well in Europe, and other places, and certainly all the ingredients are there for them to do much better in Canada. There’s a long, arduous path which involves the status quo in terms of the electoral system.”

New Zealand switched from first-past-the-post to mixed-member proportional representation after a referendum in 1993. Three years later, after the first election using the new system, New Zealand formed a coalition government between two previously oppositional parties: the National Party, their own equivalent to our Conservative Party, and the Labour Party, which is politically similar to our Liberal Party.

Shaw said there’s no need for Canada to hold a referendum on the issue as happened in New Zealand, because the circumstances are different. “Here, the Liberal Party advertised the fact in advance of the election, so it was part of the platform,” he said. “People knew when they were casting their vote that this was going to be part of it.” He compares New Zealand’s situation to Brexit, where a Conservative prime minister who hadn’t campaigned on electoral reform, and wasn’t actually in favour of change, “thought he would win a referendum to maintain the status quo, and it went the other way.”

May added Canada’s current Referendum Act doesn’t allow the government to hold a referendum on electoral reform, meaning that legislation would have to change the voting rules. And Canada’s Chief Electoral Officer, Marc Mayrand, has said a referendum would come with a price tag of $300 million.

Since 1996, diversity in New Zealand’s government has improved—in 2014, out of 121 seats, 38 were held by women, and 25 by people of Maori descent. “The House of Representatives is now more representative than it has ever been before,” Shaw said. His Green Party’s share of the party vote in 2014 was 10.7 per cent, giving them 14 seats in Parliament—one of which is held by the world’s first fully deaf MP.

In Green’s ranked ballot diorama, the red stack towers nearly two feet over the Conservative and NDP stack. The Green stack stays the same as it was in first-past-the-post, and the Bloc Quebecois stack is halved. “A Liberal cannot look me in the eye and say this is better for democracy,” Green says, tapping the red stack, “‘cause it ain’t. No way.”

May said she hasn’t taken a position on mixed-member proportional, single transferable vote, or a hybrid of the two. “My main reason for wanting to get rid of first-past-the-post is not for what it would do to advantage any particular party, including my own,” she said. “It’s for the voters, not for political parties, that we need to change our voting system.”

May hasn’t expressed a preference, but it’s clear the Greens would benefit from most alternative systems. Don’t call them opportunists, though. May’s deputy leader hopes another bit player on the scene can make its mark. “If the Rhinoceros Party can get their act together,” Green says, referring to Canada’s satirical fringe party, “and get one MP, would Parliament be diminished by having one Rhino MP whose job, a bit like a court jester, is to ridicule, but smartly, how the other parties act?”