Mark Norman breach of trust charges to be dropped. Now come the questions.

Politics Insider for May 8: Norman charges to be dropped today, Scheer fleshes out his foreign policies and parsing the Green win in Nanaimo 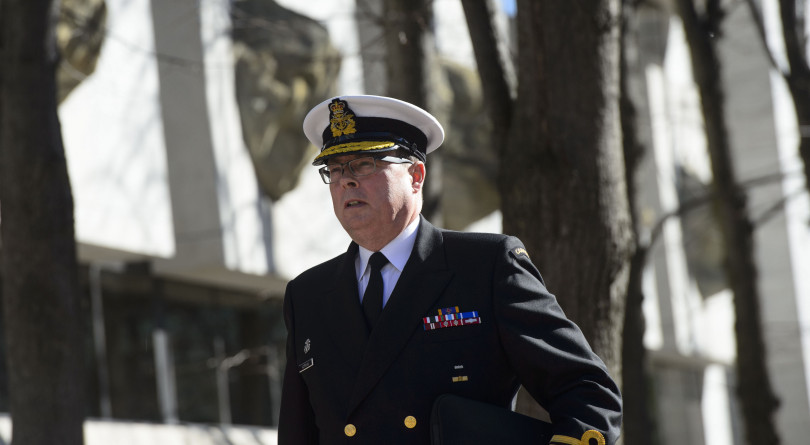 A bittersweet victory: Federal prosecutors will abandon their breach of trust case against Vice-Admiral Mark Norman today, according to the National Post and confirmed by CBC last night. The move preempts what would have been a high-profile and politically sensitive trial that was set to begin just as politicians hit the campaign trail for this fall’s election.

One question that will be asked today is ‘Why drop the charges now?’ followed immediately by: ‘Why were the charges brought against Norman in the first place more than a year ago?’ As the Post‘s Christie Blatchford wrote:

One of the prosecution’s biggest hurdles was in proving one of what are called the “essential elements” of the offence of breach of trust, in particular that Norman had the intent of using his office “for a purpose other than the public good.”

That usually translates to having had a corrupt or dishonest intention.

And yet the government has never even alleged that Norman personally benefited in any way from his alleged leaking. (National Post)

Norman, once the second-highest ranking officer in the Canadian military, stands accused of leaking cabinet documents related to a $700-million shipbuilding deal. Over the last year Norman has wracked up substantial legal bills and it’s unknown whether he will sue the federal government or any individuals. A GoFundMe page set up to raise money for his legal costs has amassed $400,000.

In a speech he delivered in Montreal Scheer attacked Trudeau’s actions on the world stage as “disastrous“: “We have seen serious mistakes like this over and over again from this government, and they are almost always attributable to Mr. Trudeau’s poor judgment.”

Among Scheer’s commitments were three proposed measures that break with Canada’s foreign policy under Trudeau. If elected Scheer said he would begin talks with the Trump administration to join the U.S. missile defence program. He vowed to move Canada’s embassy in Israel from Tel Aviv to Jerusalem and recognize that city as the capital of Israel. He also committed to strengthen Canada’s ties to the U.S. and take a harder stance on China: “If this government isn’t willing to stand up to China when two Canadians are unlawfully imprisoned and billions of dollars in trade is under attack, it never will. My goal is better relations. My goal is more economic opportunity. But that can only come after we make a stand. And I will.”

Liberals fired back before Scheer even opened his mouth, with a statement from Liberal MP and Quebec campaign co-chair Pablo Rodriguez: “Whether it’s Andrew’s Scheer’s endorsement of Brexit chaos, skepticism on climate change, corrosive rhetoric on immigration, or uncertainty on NAFTA, the Conservative plan amounts to risk and uncertainty that would hurt Canadians and our economy.” (Canadian Press)

May’s Day: As with any byelection that occurs so close to a general vote, the outcome of the race in Nanaimo-Ladysmith, B.C. on Monday, which saw the Green Party double its presence in Parliament to two, was parsed the day after for its significance to this fall’s election. Maclean’s own Anne Kingston was in the riding for part of the campaign and the vote, and while she cautions against reading too much into the results, she writes the campaign offered a preview of federal campaign strategies and the messages that will be put to voters:

The riding is politically engaged: the 75 per cent turnout in the 2015  federal election exceeded the national average of 68.5 per cent. There was standing room only at last week’s all-candidates debate where Manly delivered a message that clearly resonated: “If you elect me, we are going to fire up this country and we are going to get some things done because they are going to notice that people in Nanaimo-Ladysmith care about climate change, you care about the next generation, you care about the future. It’s important what we do here.” (Maclean’s)

At least one pundit made it clear he sees the strong turnout for the Green Party as a sign that Canadians are deeply concerned about climate change. Funny thing is, that pundit happened to be Prime Minister Justin Trudeau, leader of a party that bills itself as the face of climate change action and yet drew just 11 per cent of the vote Monday night. “One of the things we’ve seen from this byelection … is that Canadians are really preoccupied about climate change,” Trudeau told reporters. “It’s going to be really, really important that Canadians pick a government this fall that is committed to climate action and that’s certainly the point we’re going to be making throughout the fall.” (CPAC video tweet)

Meanwhile, citing unnamed officials, Bloomberg reports the Trudeau government is likely to proceed with expanding the Trans Mountain pipeline when it announces its final decision next month, following consultations with Indigenous groups. (Bloomberg)

Somewhere, Elizabeth May is smiling.

Politics, the final frontier: In the run-up to the October election Maclean’s will regularly feature seat projections and analysis from Philippe J. Fournier, founder of 338Canada. You can read some of his recent analysis for Maclean’s here and here. Yet Fournier doesn’t come from a political background. Instead he is an astrophysics instructor who, as Shannon Proudfoot writes, obsessively follows the data to let it tell the story:

The computer model that produces his projections is based on a Big Bang simulator he wrote at his college, but instead of plugging in variables like mass and gravitational field, he uses poll results, electoral districts and detailed demographic data gleaned from the census to run election simulations in various jurisdictions. Astrophysics to politics isn’t as odd a leap as it seems, he says, because it’s still building virtual worlds and populating them with data to see what happens. “When you build a simulator, you can make it say whatever you want,” he says. “The approach that I had is I wrote basically a video game.” (Maclean’s)

Thank you for calling the Government of Canada. Press “one” to disappear into a bottomless void of indifference: The latest report from the Auditor General of Canada found that at three government agencies, half of the 16 million people who tried to reach a call centre agent failed to get a human on the line. (Canadian Press)

Other findings from Tuesday’s AG report:

Canada at WTO: WTF China? At a meeting of the World Trade Organization, Canada called on China to prove its claim that Canadian canola is contaminated, which was the justification China gave for banning imports of the grain—and not retaliation for Canada’s arrest of Huawei executive Meng Wanzhou. (Canadian Press)

Right tweet, wrong time: Remember that time in March when the Public Prosecution Service of Canada—then embroiled in the unfolding drama around SNC-Lavalin and political interference—tweeted that prosecutors must be “independent” and “free from improper … political influence,” and then said the tweet was all just a coincidence? Turns out it was. More than 140 pages of documents released under federal access to information laws shows the tweet was scheduled well ahead of time. But the documents also show an office scrambling to avoid a repeat coincidence with other outreach tweets. (Global News)

A farewell and a challenge: Conservative MP Mark Warawa, who was diagnosed with cancer after announcing his retirement from politics in January, used his farewell speech to Parliament to urge his fellow MPs to improve access to palliative care for Canadians: “We’re trying to fix the body, but in some cases it’s better not to do the heroic things. Science has shown us that you can live longer and (have) a better quality of life, in some cases, if you’re given palliative care. But that was not provided to me, those options. Why is that? The system’s broken and needs to be fixed.” (Canadian Press)