Michael Sabia, a busy mandarin, heads to the top post at Finance

Paul Wells: Ottawa is set to appoint Michael Sabia as the new deputy minister of finance 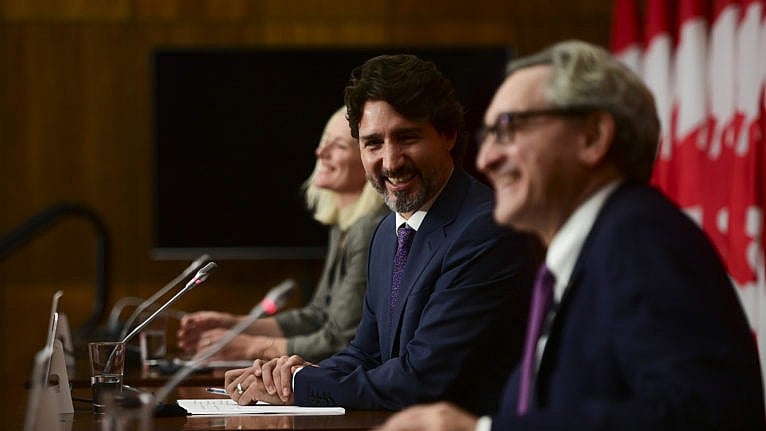 Minister of Infrastructure Catherine McKenna, Trudeau, and Sabia, then chair of the Canada Infrastructure Bank, hold a press conference in Ottawa on Oct. 1, 2020 (CP/Sean Kilpatrick)

Days after the top civil servant in the federal department of Finance announced his unexpected departure, the Trudeau government is reaching outside the department to appoint a surprising and influential replacement: Michael Sabia, the former chair of Quebec’s Caisse de dépôt pension fund who has, for only the last eight months, been chair of the board of the Canada Infrastructure Bank.

Sabia’s appointment is expected to be announced this week, Maclean’s has learned. A spokesman for Prime Minister Justin Trudeau declined to comment on Sunday night.

The appointment caps a busy year-and-change for a busy man: only 13 months ago Sabia left the Caisse to become Director of the University of Toronto’s Munk School of Global Affairs and Public Policy, a post he will now vacate. He was named to the Canada Infrastructure Bank barely four months later, essentially running the novel financing institution single-handedly through the summer after a management purge. By August he was appearing in news accounts as an informal advisor on economic matters to the Prime Minister, alongside former Bank of England governor Mark Carney, whose name drew more attention but whose tenure in the Trudeau kitchen cabinet now appears to have been shorter and less significant.

The latest stop in Sabia’s whirlwind tour is surprising, not least because until last week, the top job at Finance didn’t seem to be open. Paul Rochon has been the deputy at Finance since the minister there was the Conservative Joe Oliver, before the 2015 federal election. Sources tell Maclean’s Rochon had been telling colleagues he expected to retire after the next federal budget, slated for the spring of 2021. His decision to give notice much sooner, the day after a fall economic update that outlined massive new spending and few hints about how it would be allocated or reined in, came as a bombshell in the genteel precincts of the capital. “If Paul, who was universally respected for his smarts, his hard work, his commitment to the public interest, had challenges with a balanced fiscal framework, what can a newbie do?” one veteran official, speaking on condition of anonymity, said.

By reputation at least, Sabia is the type of newbie who can do a lot. A veteran manager at the top levels of business and government with a formidable track record managing change, Sabia has been advising the Trudeau government since its earliest days and will become Finance Minister Chrystia Freeland’s chief lieutenant in implementing a plan for ambitious government in the aftermath of a devastating pandemic.

Since the COVID-19 pandemic hit, Sabia has been outspoken in calling for sweeping new ambition for government, beginning with an op-ed he published in the Globe and Mail in March, only days after the worldwide lockdown began in March. In retrospect that piece now stands as a sort of manifesto. His appointment to run the $35-billion infrastructure bank came less than two weeks after it was published.

Governments “need to leave their orthodox thinking behind,” Sabia wrote, and “avoid the trap of incremental, piece-by-piece action that is so often the reflex of bureaucracy.” Managing the immediate crisis would be a huge challenge, but Sabia was particularly transfixed by the next one — restarting the economy after the health crisis passes.

This would be “a precious opportunity to shape our future economy,” he wrote, in language that might strike some as grandiose but that seems instead to have caught the Prime Minister’s fancy. “Remember Rahm Emanuel’s famous: ‘You never want a serious crisis to go to waste.'”

Sabia urged that governments start thinking about  “a new generation of infrastructure and spending on education. About clean tech and retooling our health-care system. And about refinancing for the long term a small and medium enterprise sector that will emerge from this crisis battered but still the engine of jobs in our economy.”

Governments have been trying to retool Canada’s health-care system for about as long as it’s had one. Relegating the project to a participial phrase while he talked about something else suggested Sabia was really in a mood to think big. “Given the scale of investments likely required to reignite our economy, this is an opportunity to do things faster, more effectively and more coherently to secure our future prosperity in what will likely be a changed world.”

A post at the Finance department would represent a homecoming of sorts for Sabia. He first started making headlines in 1990 as director-general of tax policy at Finance when the government of Brian Mulroney was preparing to introduce the Goods and Services Tax. Sabia became the department’s main spokesperson for the controversial tax change. He became deputy secretary to the Cabinet when Paul Tellier was the Clerk of the Privy Council, and followed Tellier out of Ottawa to CN Rail, where the two formed an executive team that led CN’s privatization. Tellier’s next gig was Sabia’s, too: Tellier was on the board of BCE when Sabia became the telecomms giant’s CEO in 2002. Seven years later he became CEO of Quebec’s massive pension fund, the Caisse de dépôt, taking along $21 million in compensation from BCE and a raft of mixed reviews. On one hand he had drastically reshaped the company. On another he had not met hopes for improved results, either for its shareholders or for customers. For the first time, analysts were using phrases like “congenitally incapable of making fast decisions” and “analysis paralysis” to describe the former wunderkind.

At the Caisse, Sabia overcame substantial early skepticism — he was an anglophone who’d worked most of his career in Ottawa and Toronto, running the piggy bank of Quebec nationalism — to rethink the way the Caisse invested, betting heavily on infrastructure projects internationally, and designing a light-rail system, the REM, that promises to revolutionize transit around Montreal. Not that the ride has been free of bumps. The Caisse seems not to have realized Montreal has an airport and it would be nice to ride a train to it. Sabia has long maintained that a solid infrastructure project would lure institutional investors who would match government investments dollar for dollar. Instead Ottawa and Quebec City are currently in a genteel competition to see which government will be forced to match its own investment with more investment.

So far Sabia’s return to federal government circles has been bigger on grand pronouncements than results. The same sort of thing has happened before, and recently. Sabia was on an economic growth council, chaired by the consultant Dominic Barton, that cooked up assorted ideas for economic policy transformation in Trudeau’s first mandate. It led to the creation of the Infrastructure Bank, then to not much. Maybe what was missing was a Michael Sabia in the top ranks of the public service. If so, now he gets a chance to prove it.