Michael Sabia's sure going to do something 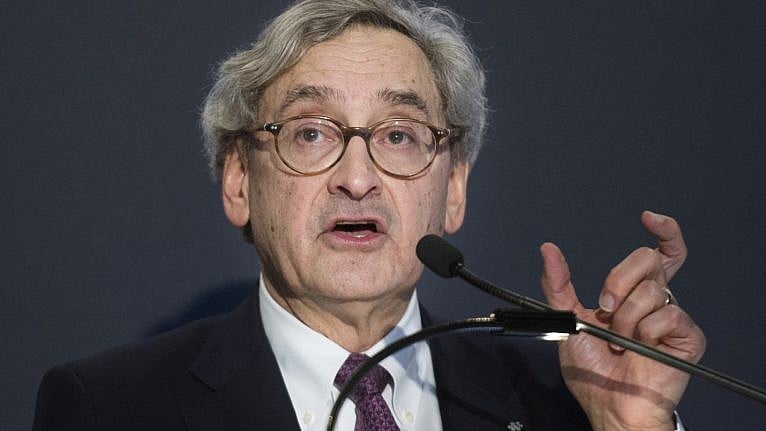 The reviews of Michael Sabia’s appointment as deputy minister of finance are as positive as they are comically vague.

“I think he’s going to shake up the department,” Scott Clark, one of Sabia’s predecessors in the DM job, told the National Post‘s Jesse Snyder. “I don’t think they’re quite ready for him yet, but he’s going to make things different.” Somebody else calls him “an ‘I want to have an impact’ guy.”

“Make things different” and “have an impact” are the goals you impute to somebody when there is no way of knowing what goals they have. Parents will recognize the equivalent of a book report from somebody who hasn’t read the book: “What else can you say about it except—Sabia!”

Here’s a neat three-tweet gathering of the great and the good. The current CEO of the Business Council of Canada says the new guy will bring “rich, diverse experience and wisdom.” His predecessor adds that Sabia’s ascension ensures “the country and the government will benefit greatly.” A man who spent years organizing the annual Davos conference chimes in with a hearty: “Agreed!”

I mean… sure? Maybe? But anyone who did not already arrive with a strong belief that the former Caisse de dépôt CEO and lifetime fixer is a self-executing macro of excellence will wonder what he will do to benefit us greatly, what goal or project his rich diverse experience will serve, what precisely they-who-are-about-to-be-shaken-up are unprepared for.

Some of the pans are as unpersuasive as the raves. One former political staffer thinks Sabia’s brief is to “prepare Trudeau’s spring election platform.” Again, maybe? Except here’s the thing about that. Sabia has already given this very government advice in the not-too-distant past, via the so-called Growth Panel. Trudeau ignored most of the advice, except the bit about the infrastructure bank, which–well, anyway. And he didn’t run for re-election on any of it, preferring thinly-sliced micro-promises for a thinly-sliced collection of discrete targeted voter constituencies. A tax benefit here, a camping voucher there. Big thinking may make history but it’s been a while since it won elections, and these Liberals actually like to win elections.

I’m sure Sabia intends to do great things, and the Prime Minister intends for him to do great things. Definitely he has had great things in him, and recently too. That regional rail network around Montreal is taking time and has hit some speed bumps of what seem to me to have been an eminently avoidable nature, but in the end it’ll exist and it can hardly fail to transform the fabric of a great city. That Sabia was able to manoeuvre two governments into paying for his plan is genius on a level Tom Sawyer would have admired. “Ain’t but one government in a thousand can pay for this rail network the way it’s got to be paid,” little Michael told his friends, walking away with a pocketful of marbles and a kite.

Now he returns to Finance—the department, solons note, where his journey began. “Tough role for an outsider,” one former ministerial staffer told me this week, “especially one with his style. Taking direction from a minister, PMO, PCO [that’s Privy Council Office, the central nervous system of the bureaucracy], minister’s staff…”

It’s a team job, in other words. All the entities this former staffer lists are, on any given day, empowered to make requests of a DM that have some of the force of orders. That can be hard to take. “It has been a while since [Sabia] drank from the fountain of humility,” a former senior official reminded me. “Most CEO’s avoid the stuff.”

Of course Sabia will come to the capital well-armed against the petitions of lesser mortals. He has patents of nobility from the Prime Minister himself, or from the finance minister, whichever is greater. So, once, did Bill Morneau and Jane Philpott and the deliverology guy and the other deliverology guy and three Clerks and counting. Of course you may go into a role with some favoured project in mind, but what is it about 2020 that comforts the notion that favoured projects can long avoid contact with events?

A challenge is no guarantee of a setback. Sabia has faced challenges before, generally with panache. But he’s met them with a certain approach, in a certain context, and it’s fair to wonder whether the current context favours his preferred approach. He’s had four big jobs in his life, which is three or four more than most people get. He basically spent the ’80s in the public service, the ’90s at CN Rail, the ’00s at BCE and the ’10s running the Caisse de dépôt.

In the bureaucracy he was most notably the director-general of the tax policy branch when the Mulroney government was trying to implement the Goods and Services Tax. That was a battle, long and messy. Sabia was the public service’s main explainer of the change.

For our purposes it’s worth noting only that the GST was a specific, narrow change of a technical nature but one that provoked a lot of emotion; that implementing it required sustained engagement by an empowered bureaucracy; a detailed public debate in the face of strong opposition; and to-the-hilt political commitment from a Prime Minister whose party, incidentally, was cut to ribbons at the next election and never won an election again in the form under which it was then constituted.

None of those ingredients seems in place for whatever the battles of 2021 will be. The narrow change of 1990 has become the gassy handwaving of 2020 (“…and retooling our health-care system.” The “and” kills me. The offhandedness of it. “See if you can retool health care by lunch while you’re at it, kid”). The empowered bureaucracy has been replaced by one that watched the Prime Minister of Canada blame it for the WE controversy (“That was a binary choice that was given to us by the public service”) and, incidentally, was paying attention when it turned out the last DM of Finance had all of zero clout after a career in the trenches. A lot of these people don’t necessarily feel that Michael Sabia’s crusade, the nature of which nobody has yet deigned to reveal to them, is their fight. And even to the extent they want to do their very best, could anybody blame them if they’re prone to second-guess themselves at every step? After all they’ve seen?

And then there’s the matter of to-the-hilt commitment from a Prime Minister who loves a fight. Judge for yourself on that bit, ha-ha, nervous laugh. I won’t try to influence you. Neither will Morneau and Rochon and Wernick and Charette and Andy Leslie and Rachel Notley and all the other Banquo’s Ghosts crowding the banquet table.

What’s perhaps most pertinent, as we try to predict Sabia’s chances of actually changing things, is that this will be his third job in a year. So never mind the government—it’s fair to wonder whether Sabia himself retains the habits of sustained engagement that made him what he is today. After half a decade of advocating for a transformational infrastructure bank, he finally got his hands on the thing, and the result was $407 million for Alberta irrigation. This is probably good! Irrigation is good. But I can’t help remembering that Dominic Barton, who with Sabia once pitched the Infrastructure Bank to Morneau, liked to say it would finance projects “you can see from the moon.” Apparently the moon got closer.

The irrigation project will be financed, over the long term, in user fees from farmers’ collectives. Fee for service rendered, a perfectly good arrangement. It also marks the end of the infrastructure bank’s original model, which was to have Norwegian or Emirati pension funds front the money and pocket the user fees. This turned out to be problematic in two ways. Cabinet couldn’t find many major user-fee projects it was willing to risk politically. This government got elected, after all, on a promise to eliminate a user fee, for a bridge to Montreal. And the pension funds from exotic lands have neglected to line up for a chance to pay billions. So Sabia consecrated the bank’s transformation from a broker of international deals to a simple $35-billion nest egg, which will be paid out in dribs and drabs. It’s no tragedy. You can buy a lot of dribs with $35 billion.

The original deal was that one taxpayer dollar would attract many from outside investors. Bill Morneau even had a chart in the 2016 fall update to explain it all. The Norwegian pension funds having failed to show up, Tom Sawyer has had to find new volunteers. Freeland’s fall update reveals their identity: the government plans up to $100 billion in new infrastructure funding, starting in a couple of years. That’s two or three dollars for every dollar in the infrastructure bank. Turns out a dollar from your pocket will indeed attract more dollars—also from your pocket. See? Great things are happening already.