There will be more money for summer jobs. Will it work?

The important takeaway from Trudeau's announcement on youth employment: What it says about the current barriers to evidence-based policy-making 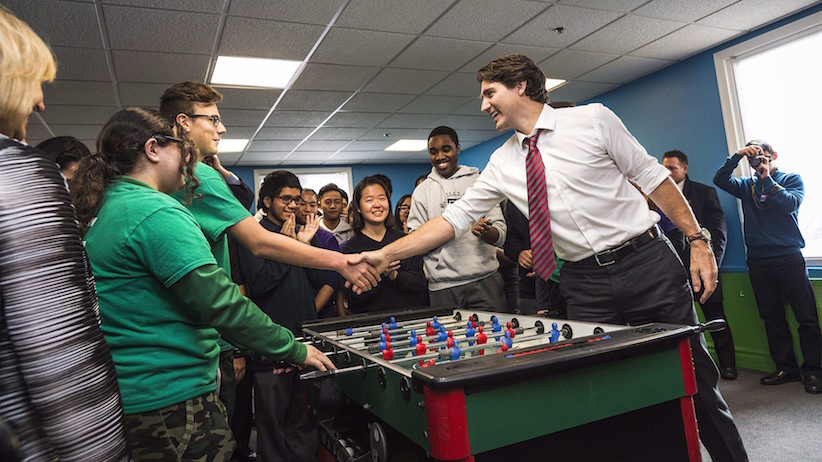 On the 100 day anniversary of his time in office, Prime Minister Justin Trudeau plays foosball with local youth at the Dovercourt Boys and Girls Club before making an announcement to the media about the expansion of the Canada Summer Jobs Program in Toronto on Friday, February 12, 2016. THE CANADIAN PRESS/Aaron Vincent Elkaim

To mark his 100th day in office, Prime Minister Justin Trudeau announced last week that funding for the Canada Summer Jobs Program would be doubled. It was an opportunity to learn something about the road ahead for a government trying to measure results and make decisions based on evidence.

The Canada Summer Jobs program delivers funding to eligible private and voluntary sector employers to hire youth aged 15 to 30 (yes, Boomers, “youthhood” now extends through the 20s) while on summer break from full-time studies. It’s part of the Summer Work Experience portion of the Youth Employment Strategy (YES). The strategy has been around in one form or another since 1997.

In their platform, the Liberals had promised to boost youth employment by, among other things, spending $300 million more over three years on the YES. Youth unemployment has hovered around two times the national rate for a very long time (see chart below). If this is a crisis, it’s not a new one. 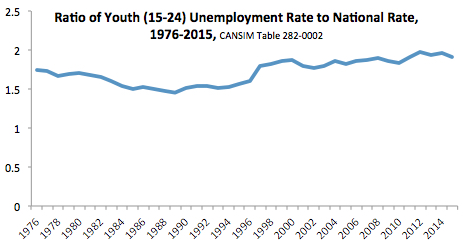 The upcoming budget may change this, but as of today, the YES is slated to lose just under $19 million in the next two years. The Prime Minister’s announcement promised to increase spending on the Canada Jobs Program, just one component of the YES, by up to $113 million for each of the next three years.

Members of Parliament really dig this program. A quick online search finds that Bob Nault (Liberal, Kenora), Wayne Stetski (NDP, Kootney–Columbia) and Karen Vecchio (CPC, Elgin-Middlesex-London) had already been out of the gate, urging organizations in their ridings to apply to the annual call for proposals. As mentioned in Trudeau’s press release, MPs get to play a role on this program. It’s not entirely clear if they help to set local criteria—which you can review on a riding-by-riding basis here—or if MPs help to select winning projects. But MPs clearly do play a role in promoting the program as a good-news announcement. From a political management perspective, this program has much to recommend it. Caucus and even Opposition members can feel like they are part of something positive that involves money for employers and youth in their riding. For the 63 per cent of MPs who are rookies in Parliament, this may also be a good opportunity to test their networks and knowledge of their riding.

Trudeau’s press release promised to allocate funding based on student unemployment. The intent seems to be to put more money into the ridings where there are more unemployed full-time students. This seems vastly better than allocating spending by the party of the sitting MP, which has been an accusation levelled at more than one previous federal government.

What does this mean for where the dollars are likely to go? To be eligible to be hired with Canada Summer Jobs funding, a student has to have been studying full-time in the last academic year and be returning to full-time studies in the fall. Here’s the rate, by province, of unemployment among full-time students over a four-month average at the end of summer 2015:

And here’s the same graph with the unemployment rate, by province, of current full-time students as an average of the five months since September:

Out-of-work students who have travelled, for example, to Nova Scotia for school will probably want to come home to maximize their odds of landing federally subsidized work this summer, that is, unless home is Saskatchewan. I think there’s a good policy debate to be had about whether government should limit these YES dollars to summertime work when fewer and fewer students are able to get by without working during the school year.

Last year the Canada Summer Jobs program funded a little under 35,000 student jobs from May through August. Does doubling the spending reflect a decision to invest in a high-performing YES program? Well, it’s hard to say. You see, in contrast with all of the other programs that make up the YES, the Summer Jobs program doesn’t seem to publicly set performance targets. The Summer Jobs program does seem to account for about 70 per cent of all youth who ever get any support in the Youth Employment Strategy. So maybe it’s having a big impact. The summative evaluation of the Youth Employment Strategy released last year found that at about $3,000 per participant, it’s a “relatively low-cost intervention” that participating youth and employers find “satisfying.” But does Canada Summer Jobs make a dint in youth unemployment? Do participating youth have better outcomes (financial, educational and attitudinal) compared to their peers? We don’t know and we can’t know because it seems we don’t collect the kind of information on the YES that would let smart folks in government or elsewhere figure out those answers.

One possible interpretation of Friday’s announcement is that the platform promise to spend $300 million more on the Youth Employment Strategy has now been fulfilled and it’s time to move on to the next item on the to-do list. Faced with a symbolic date in need of an uncontroversial policy announcement, I can imagine the Canada Summer Jobs program looked great. But I’d be surprised if Friday was it for promises on youth employment. The Liberal platform had, among other things, promised investments in another, more intensive, YES program called Skills Link (a program more targeted toward youth with greater challenges in employment or education) and to restore a national Youth Service Program (see page 6 of the platform). Why did the Canada Summer Jobs program get the boost on Friday and not Skills Link? I don’t know, but based on that same YES evaluation, Skills Link seems to be effective in moving participants into employment (a seven per cent increase five years out) but not into employment that provides a stable income. Evidence is rarely tidy.

I think the more important takeaway from Friday’s announcement is about the current barriers to doing evidence-based policy-making. Federal internal data collection and evaluation capacity needs rebuilding. Others have already observed that the ability of the federal public service to craft advice (presumably based on internal analysis of data) is likewise atrophied. But this isn’t just a public service challenge. Political pressures and exuberance to do or announce something constrains opportunity for a government to look at all options and information. Governments are usually working with second-best information, muddling along with too little time to make optimal use of what information they do have. This constraint is exacerbated when there isn’t much information to offer decision-makers.

To make good on their promise of evidence-based policy-making (see page 37 of the platform), this government has a steep hill to climb. It’s going to take time to rebuild federal policy-research capacity. In the meantime we might yet see a few policy announcements based on understandable politics but fuzzier evidence. Canadians seem inclined to cut this government some slack.

Trudeau’s government can accelerate the culture change it wants by first making sure monitoring and evaluation is baked-in when programs are changed, and second, making a habit of offering detailed explanations (including available data) for its policy choices. Opposition parties, mainstream media and other stakeholders could also get in the habit of asking and on Friday, they didn’t.

I’m still optimistic about the road ahead for evidence-based policy.  But I think the road may be in worse shape than many anticipated.