Muddled is the Trudeau message on Bill C-69 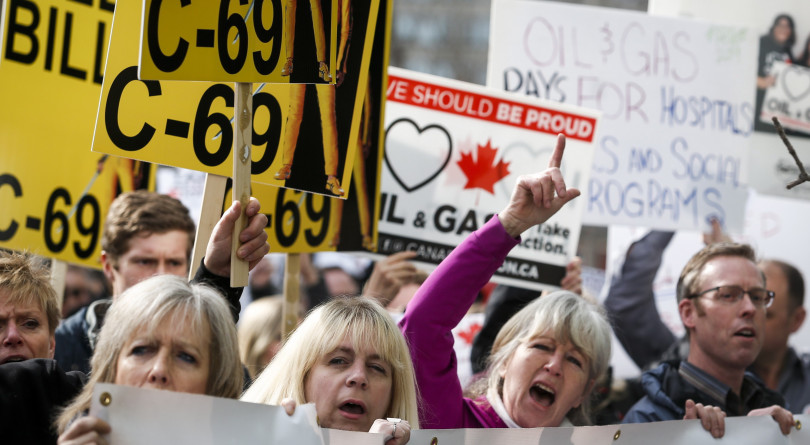 Pro-pipline supporters rally outside a public hearing of the Senate Committee on Energy, the Environment and Natural Resources regarding Bill C-69 in Calgary, Alta., Tuesday, April 9, 2019. (Jeff McIntosh/CP)

Justin Trudeau’s new cabinet met for the first time Thursday, but his choices of who was in the room and what jobs they’ve been given are still being scrutinized.

Chrystia Freeland should have remained Minister of Foreign Affairs: Trudeau erred when he shuffled Freeland out of her role as Canada’s top diplomat, writes Marcus Kolga, a human rights activist and senior fellow at the Macdonald-Laurier Institute’s Centre of Advancing Canadian Interests Abroad:

It is both dangerous and unwise to begin experimenting with Canadian foreign policy, with so much uncertainty affecting our allies, and the ongoing threats to our interests from malign regimes in other parts of the world. Canada cannot afford to be placing its foreign policy in the hands of anyone other than the very best. Read more ››

How Trudeau’s cabinet has changed since his first trip to Rideau Hall: This group of cabinet members has more Ontarians and far less Prairie representation. And it’s just a little older, on average. Nick Taylor-Vaisey charts how this cabinet is different from Trudeau’s first in 2015.

Jane Philpott on what she learned as a first-time cabinet minister: The former star cabinet minister who resigned over Trudeau’s handling of the SNC-Lavalin file and his office’s treatment of Jody Wilson-Raybould, writes that the key to success in cabinet is asking intelligent questions and truly declaring your mind, as you swore you would do:

Congratulations to the cabinet ministers of the 43rd Parliament. You’ve reached one of the highest pinnacles of prestige in the government of Canada. The job comes with serious responsibilities. Some of you continue in a position you’ve held for up to four years. Others are entering a whole new world, and the pressures will come at you quickly.

I’m thinking of Anita Anand and Steven Guilbeault, both newly elected MPs who were immediately assigned a cabinet post. The same thing happened to me four years ago, so I can imagine what your world looks like now. Read more ››

Railroad blues: A strike by more than 3,000 unionized CN Rail workers is into its fourth day, and political pressure is mounting on the Trudeau Liberals who have so far balked at introducing back-to-work legislation. That legislative hammer was a favourite tool deployed — or at least threatened — by the former Harper government to end strikes, but Liberals have said they want the two sides to reach a deal themselves. Now Quebec Premier Francois Legault is warning the province is just days away from an “emergency” when it runs out of propane needed to heat barns and dry grains, not to mention some health centres and nursing homes. Yet while Conservatives, industry officials and now premiers are all urging Trudeau to force an end to the strike, doing so would alienate NDP leader Jagmeet Singh before Trudeau’s minority government has even faced its first confidence vote.

Who to listen to?: On Thursday Trudeau met the mayors of Calgary and Vancouver. Calgary’s Naheed Nenshi said in their meeting Trudeau was open to “improving the system” for approving major resource projects as spelled out in the Liberal’s Bill C-69. But wait, the new environment minister Jonathan Wilkinson drew the line at actually modifying the legislation. “We’re open to a discussion around how we best implement the act. That’s what we’re open to, not amending the law,” he said. But wait again, when Jim Carr, Trudeau’s special representative for the prairies, was asked if changes might be made to the legislation, he said “I think there’s an openness to look at the legislation. The Prime Minister has said that.”

When Justin meets Doug: Later today Trudeau will meet with the man he campaigned hardest against in the recent election. Not Andrew Scheer but Ontario Premier Doug Ford, who he attacked constantly in an attempt to link the Premier and Scheer in the minds of voters. Ford has noticeably toned down his rhetoric in the wake of the Liberals’ strong showing in the Greater Toronto Area. Also, don’t wait for fireworks when the two politicians come face-to-face. A senior official in the Ford government told the National Post “we disagree about the environment but there are lots of areas where we agree. I wouldn’t expect it to be a hostile meeting and there will be no attempts to stick it to the prime minister.”

Power of One: Check out the latest episode of our Power of One podcast featuring Kathi Lynn Austin, the woman who hunts illegal arms dealers. Over the years Austin has targeted, investigated and helped to bring down some of the world’s most dangerous arms dealers—in some cases meeting them face-to-face, and here she shares her remarkable story.

Your turn: Help us better understand what you’d like from the Maclean’s Politics Insider newsletter. This short survey will only take a few minutes to complete. We really appreciate the feedback.