NAFTA's future is uncertain, but here's one plausible scenario

Negotiations might be about to go on hiatus...until 2019, and separate U.S. deals with Canada and Mexico loom as a very possible outcome 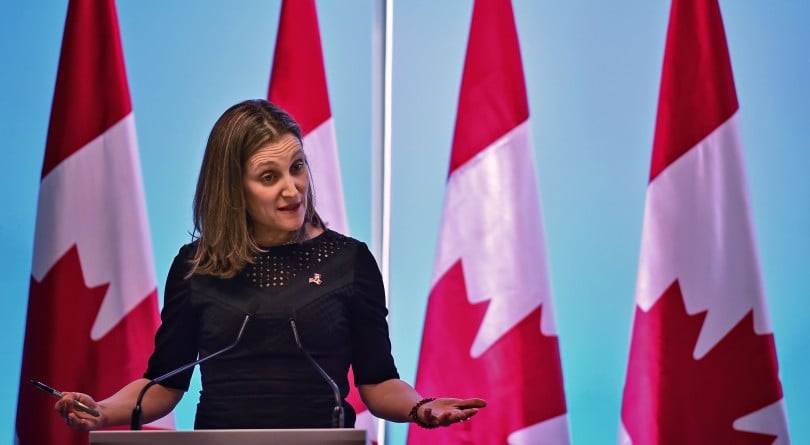 Chrystia Freeland speaks to the media during the seventh round of NAFTA (North American Free Trade Agreement) talks in Mexico City, on March 5, 2018. (RONALDO SCHEMIDT/AFP/Getty Images)

It’s been more than a year since the NAFTA renegotiations foisted on Canada and Mexico by U.S. President Donald Trump started, and so many so-called deadlines have come and gone since then that the word has lost its bite.

But this week, say senior Canadian government officials who spoke on condition they not be named, is different. The reason: When Trump announced his surprise bilateral agreement in principle with Mexico last month, he started a clock ticking that requires him, under the U.S. law known as the Trade Promotion Authority, to deliver the text of that deal by Sept. 30 to the U.S. Congress.

There’s still a slim chance that Prime Minister Justin Trudeau’s bargaining team will come to terms with Trump’s hardball negotiators over the next few days, in time to turn that bilateral U.S.-Mexico deal into a trilateral pact that includes Canada. But that looks increasingly like an extreme long shot.

The top-tier negotiators aren’t even meeting. Foreign Minister Chrystia Freeland, hand-picked by Trudeau to handle NAFTA, is at the United Nations in New York this week, tending to other international files. U.S. Trade Representative Robert Lighthizer, Trump’s powerful lead on NAFTA and other trade files, was also in New York, where he said on Tuesday, “The fact is, Canada is not making concessions in areas where we think they’re essential.”

READ MORE: When it comes to NAFTA, deadlines are meaningless

Predicting what happens next is fiendishly difficult. Several sticking points remain far from being resolved, including Canada’s stiff resistance to U.S. demands that NAFTA’s dispute-settlement mechanism be scrapped. As well, the machinery of domestic U.S. and Mexican electoral politics is bringing complex moving parts into play. A new Mexican president is slated to be sworn in on Dec. 1, while U.S. mid-term congressional elections, which could shake up both the Senate and the House of Representatives, are coming in early November.

Still, stipulating that there are too many political and policy variables to predict anything with much confidence, a Canadian official sketched the following scenario as one that’s emerging as a distinct possibility:

There are lot of assumptions built into that sequence, many of which are wide open to debate. Colin Robertson, a former diplomat and vice-president at the Canadian Global Affairs Institute, says the actions of the U.S. Congress are just one serious question mark.

Will Congress accept that bilateral U.S.-Mexico deal, or insist on an agreement that includes Canada? Robertson says Democrats fired up by the battle over Senate confirmation of Trump’s controversial Supreme Court nominee, Brett Kavanaugh, appear to be in no mood to give any Trump proposition—including the bilateral U.S.-Mexico deal—an easy ride. “To assume it’s a slam-dunk in Congress, I just think is wrong,” Robertson said. “That would be my read watching the Democrats over the last weeks.”

Indeed, U.S. politics in the age of Trump are turbulent beyond the experience of any of the Canadian politicians or trade officials embroiled in these prolonged NAFTA renegotiations. Their hesitance to forecast anything is only prudent. But this much is clear: a future in which the nearly 25-year-old NAFTA is split in two is a prospect that Canadian officials are now mapping out seriously. This week’s deadline matters, and might even be looked back on one day as the start of the post-NAFTA era.