The new Green leader talks to Maclean's about what her party has to offer, her proudest moments and how to get good people into politics 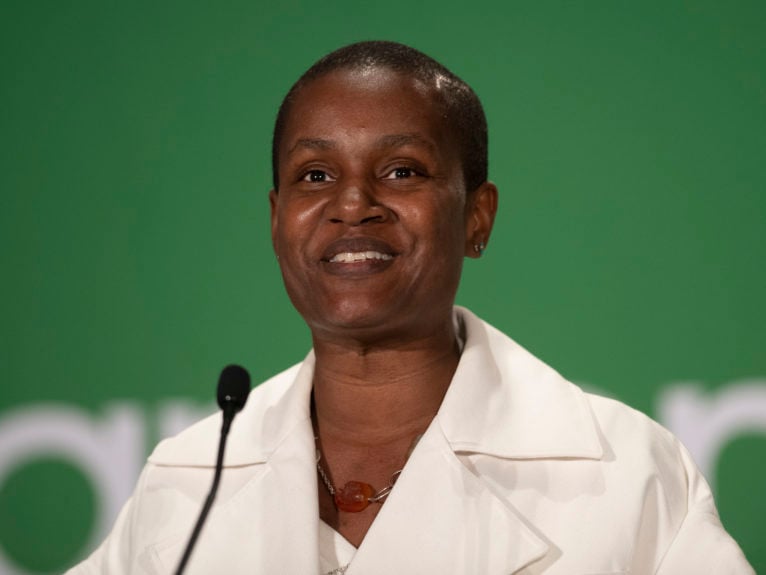 Paul takes questions from the media in Ottawa on Oct. 3, 2020 (CP/Adrian Wyld)

After a year-long contest to replace long-serving leader Elizabeth May, the federal Green Party has chosen Annamie Paul as its new permanent leader.

Paul is a fluently bilingual lawyer from Toronto, a second-generation immigrant born to Caribbean parents and a former advisor to the International Criminal Court and Canada’s mission to the European Union. She won the contest Oct. 3, decided by party members’ online votes, on the eighth ballot in a crowded field.

In an interview the day after her victory, Paul does not come across as someone intent on pushing the Greens in a new direction or imposing her own vision on what is an eclectic, easily-divided membership. Rather, she seems more focused on changing the way Canadians think about the Greens as they already are, and the ideas that they’ve been putting forward for years.

She spoke to Maclean’s from Ottawa about her history, her pitch to voters and the book she hopes to get around to reading one of these days.

Q: You are the first Black permanent leader of a federal party in Canada and the second Jewish person to hold such a position. What does that mean to you?

A: I had people calling me and calling my family members in tears, talking about how much it meant to them. People calling or writing to say that they’d been watching the results with their children, and how much it meant to them. So I’m very aware of just how meaningful it is for a lot of people. And we do know that those symbols matter. It’s going to be just a little bit easier today for young Black girls or Indigenous girls or other under-represented groups to imagine themselves in politics. I’m proud that we had a group of volunteers that really believed that this was possible, even though it had never been done before. I’m going to try to live up to what I know the expectations will be for me.

Q: You bring plenty of legal and international experience into this role. Before you got into politics, what would you describe as your proudest accomplishment?

A: One of the things I’ve always tried to do when I see a way of amplifying impact, I try to create something that can do that. When I came back to Canada after my graduate studies, I founded the first organization in Canada focused on political under-representation and trying to change that, and to support a whole new generation of public policy leaders from marginalized groups. When I was in Barcelona, I saw that there were more and more international NGOs gravitating to the city. They had no home base, they had no structure of support, so I co-created an innovation hub for them. That helped to amplify their work all over the globe. Finally with Operation Black Vote Canada, with Velma Morgan I helped co-create the 1834 fellowship, which is training for 40 new young, Black public policy leaders. All of these are about doing more collectively than I could do by myself.

Q: The story you tell about why you decided to go bald is one that seems to say a lot about you.

A: I don’t know why my husband and I thought this was a good idea, because he was also in graduate school, but he thought, “Let’s have a kid. We have no money. I’m living in New York, you’re living in Princeton, I have two years of graduate studies, you have one. Let’s have a kid.” My son was born between my first and year of graduate studies. One night early in the fall, after I returned to school, I had this infant, and I had my homework, and I looked at my hair, and I thought of how many hours it took me to care for it. And I realized: Something has to go. It can’t be the kid—there’s rules about that. [laughs] It can’t be my studies. So the obvious thing was my hair. That’s really the story, it’s just that simple.

Q: You have said that if people are dissatisfied with political outcomes, they should make different choices. How will you convince voters that the Green Party is a trustworthy choice?

A: [Liberals] are intellectually exhausted. And I think that’s a by-product—not just for them but also for the Conservatives and the NDP—of having been in politics for a very, very long time. Having become really focused on what the polling is telling them about where they should be headed. And they, to my mind, have unfortunately lost the capacity to really think big and innovate in a meaningful way. I say that with a great deal of respect—I know that there are many committed people in politics. But it’s what I see. Sometimes the well runs dry. The Green Party is a solution to that because we have been talking about the innovative public policies that would have made us more resilient now and could make us more resilient in the future.

A: When I ran in 2019 [in Toronto Centre] I did not hear the NDP candidate or the Conservative candidate or Bill Morneau talking about guaranteed livable income. When I mentioned it, I heard crickets, I heard nothing. I did not hear anything when I talked about creating a safe supply and decriminalizing illicit drugs. Universal pharmacare, as well. Universal post-secondary education. All of these things, Greens have been talking about for years—often in the wilderness on our own. So it’s wonderful that they’re on board, and we want to work with them on that, but there comes a point where you should stop going to the copy and really choose the original. And that’s us.

Q: A large part of the Green base wishes that the party would reassert itself as overtly leftist and eco-socialist. You have been described as more of a centrist. But is that how you would describe yourself?

A: I joined the Green Party because I believe it to be the most progressive party in Canadian politics and offering the most progressive policies and to be constantly working toward a more just and equitable society. That is why I joined the party and I remain utterly convinced, even with our existing policies, without one single innovation, if we were to adopt even half of the things Greens proposed in our 2019 platform we would transform Canada for the better.

Q: You’ve said that you intend to act as a “chief spokesperson” for the grassroots. But what would you like to see added to the policy book?

A: We didn’t expect to be here as a planet, as a global community fighting this pandemic and this virus. Everyone, every single political party here and elsewhere, should be really looking at every single one of our policies to see what it means. Because the pandemic has touched every part of our society. Our economy, our social structures, just every single part of our society. I want to see us using this moment as the chance of a lifetime to accelerate our transition towards a net-zero emissions economy.

Q: Would you ever consider a formal coalition with the NDP?

A: It’s a discussion that I would participate in as a member but it’s not one that I would initiate. I do know that there are members that are interested in that—I’m sure that it’s going to be part of our upcoming discussions. I love the way that Green Party members think—we’re always questioning, and always considering. My job will never be to tamp down consideration of things. Unless they conflict with core values and fundamental rights, and then I have no problem tamping away.

Q: Greens did not run a candidate when Jagmeet Singh ran in the Burnaby South by-election. Do you expect him to show you the same courtesy in Toronto Centre?

A: I will say that I leave that up to him . There are certain traditions that Greens have acknowledged and respected that we seem to be out on our own in doing that with. I do know that it’s clear that it made a difference for him when he was seeking his seat that we chose not to run a candidate. But that is for those parties to decide.

Q: Yeah—have you been reading anything?

A: What have I been reading? [laughs] Have you ever participated in a political campaign?

A: Okay. Have you ever participated in one during a pandemic?

A: What have I read?  I had this really ambitious plan that in my “down time,” I was going to read a series of short stories by Gabriel García Márquez, who is one of my favourite authors. But I’ve just been doing this from 8 o’clock to about 11 or 12 o’clock every day since February. I hope that I will be able to get a little more balance, to be honest, because it’s important, if you want good people in politics, that we allow them to find a way to have some kind of balance. It’s very much an all-or-nothing exercise, and I don’t think over the long term that’s really sustainable for people who have other things that they need to care about—like family, or friends, or children. And I don’t think it’s necessary. But it’s certainly the way it is now. So… I have read nothing. [laughs] I’m going to try and begin this role in the way I hope to continue, which is to be completely honest and transparent.