On climate, at last, Justin Trudeau is all in

Paul Wells: It's become a handy rule of thumb to assume this government will take the easy way out. Not this time. 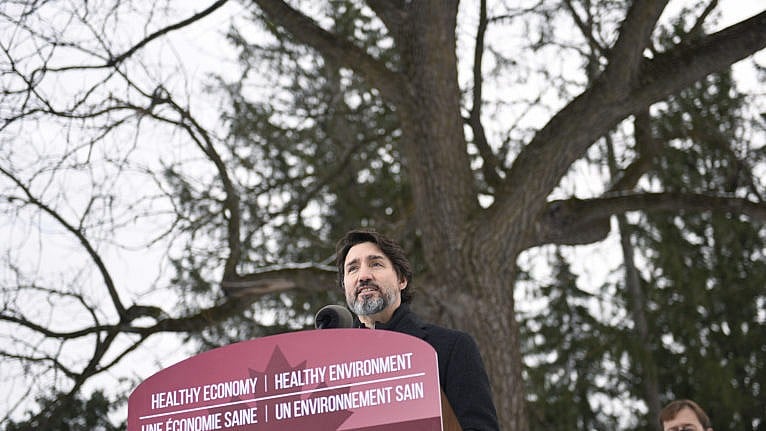 Trudeau makes an announcement on the government's updated climate change plan, in the Dominion Arboretum in Ottawa, on Dec. 11, 2020 (CP/Justin Tang)

Will wonders never cease. We have here a specific, detailed plan to achieve significant progress in reducing carbon emissions in Canada. The reaction from people who live their lives in the trenches, like this guy from Greenpeace and this excellent journalist and one-time Green Party candidate encourages me in my own: a kind of startled admiration.

Justin Trudeau doesn’t often take risks. But putting the carbon tax on course to triple in a decade is risky. I had assumed the Liberals were done with carbon-tax increases, even in the tax-and-rebate form they’ve used to ensure a net benefit for most consumers. When I interviewed Jonathan Wilkinson this fall and he kept banging on about how pricing carbon is the most efficient way to ensure emissions reductions, I kept re-asking the question because I thought surely the PMO simply hadn’t broken it to him yet that he didn’t have a chance.

That’s not only because it’s become a handy rule of thumb to assume this government will take the easy way out: spend, subsidize, build client groups. It’s also because climate activists had also seemed to be souring on carbon taxes, not because they don’t work but because they’re hard to sell politically and because they seem so liberal, allowing a market to sort out its own priorities in new circumstances instead of having choices dictated by, the theory goes, benevolent leaders. So, when McGill’s Chris Ragan and Andrew Potter argued for tripling the carbon tax as an alternative to fancy build-back-better dirigisme, they met with scorn, including from the aforementioned Greenpeace guy (“Market evangelists aren’t going down without a fight”) and, on Twitter, from the intermittently well-connected Gerald Butts.

And now, damned if the Liberals aren’t tripling the carbon tax. Well, setting it on course to triple, and a bit more, by 2030. Which is far slower than Ragan and Potter advocated, but it’ll still require accelerating the growth in the tax after its original planning horizon ends, so that counts as gumption in my book. It’s never great when governments make plans beyond their own electoral lifespan. But this sets down a marker that the Trudeau Liberals, if re-elected, would ignore at their peril.

Yes, peril. It’s become clear that the greater political danger for the Trudeau Liberals would be inaction on the climate file, more than action. We had an election on it. Everyone who was against carbon taxes got free exposure on the cover of Maclean’s, and even then they lost in a rout. It’s highly symbolic that Trudeau announced his carbon plan the day after a virtual First Ministers’ Meeting. Unlike in 2016, he didn’t feel a need to bring his latest plan to the premiers’ table.

Of course there’s a lot of other stuff in the plan Trudeau, Wilkinson and Steve Guilbeault announced today. Building retrofits, electric-car charging stations, emissions regulations tailored to the toughest standards in North America, which gives states—or British Columbia?—the ability to set a brisker pace than the Biden administration if the incoming president can’t set the agenda. Some of these will help, but they won’t make the difference the carbon price will make. It’s possible to argue the carbon tax and attendant rebates or income-tax-rate reductions should have been even bigger, but I’m just astonished they’re there at all.

There’s all kinds of room to fail on implementation, which means the federal Commissioner of the Environment and Sustainable Development—imagine my surprise when I googled him and realized he’s an interim who’s been serving for a year and a half while the government hasn’t named a permanent replacement—will have an important job monitoring progress. And politically, Trudeau’s and Wilkinson’s plan opens up real opportunity for the Liberals’ opponents, as any real plan does. Erin O’Toole had been planning to position himself as more ambitious than Andrew Scheer on credibly reducing carbon emissions. Theoretically Trudeau just increased his manoeuvring room. Unless he just redefined seriousness on the file. To the Liberals’ climate-left, Elizabeth May always said Stephen Harper’s emissions targets for 2030 were too timid, and that the government can’t own a pipeline and meet real targets too. Trudeau just doubled down on both policies. If Annamie Paul, the new Green leader, is able to make any kind of mark on the Canadian political discourse, Trudeau just gave her fuel too.

There remains the effect of all this on the federation. Right after last year’s election, everyone made a show of worrying about Alberta’s and Saskatchewan’s response to a Trudeau re-election. Everything in today’s announcement boosts costs and lowers returns for the oil sector. With what results, we’ll soon see.