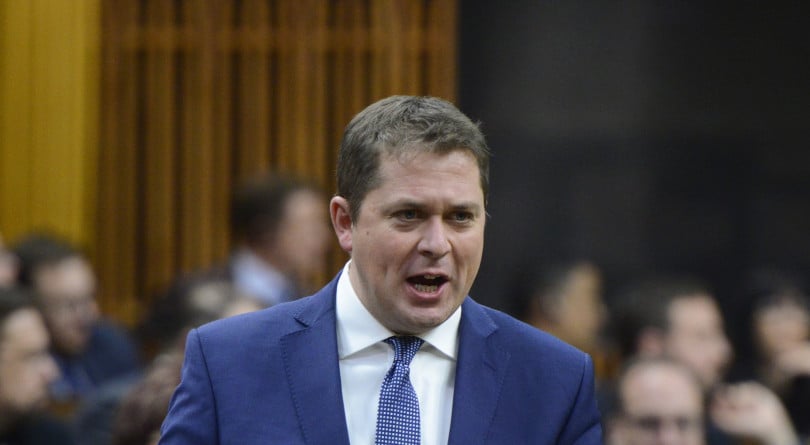 Conservative Leader Andrew Scheer stands during question period in the House of Commons on Parliament Hill in Ottawa on Thursday, Feb. 20, 2020. (Sean Kilpatrick/CP)

Can the tone in Ottawa get any angrier? Marilyn Gladu, who appears to be matching her Tory leadership rivals’ rhetoric, proclaimed on Sunday her intention to defeat the Liberal government as soon as possible if her party gives her the top job. “They are destroying Canada and decimating our economy,” she said.

Yesterday, outgoing Tory leader Andrew Scheer got on the phone with Prime Minister Justin Trudeau. Scheer released a “readout” of the call, in which he called on the PM to take action on rail blockades before they “shut down the economy completely.” The PM also conferred with his Incident Response Group, a roving cast of characters that yesterday included several cabinet ministers and the RCMP commissioner, on the blockades. The Ontario Provincial Police started making arrests at the Tyenindaga blockade. And that was all before noon.

As Canada reacted to Teck Resources‘ decision to withdraw its application for a $20.6-billion oil sands mine, federal and provincial Tories were furious. After Tory calls for an emergency debate on the project failed, Scheer said Liberals “can’t hide their glee” at the project’s fate. Later, the House voted down a Conservative motion to side with elected chiefs who support the Coastal GasLink pipeline. Scheer also reacted to a ruling out of Alberta, where the provincial Court of Appeal called the federal carbon price unconstitutional. Premier Jason Kenney hailed the decision as a “victory” for his province, and promised to take the fight to its crescendo in the form of a Supreme Court of Canada hearing.

Jonathan Wilkinson, the environment minister, reminded reporters that two other courts of appeal have already ruled in the feds’ favour, and he “looks forward” to the definitive ruling from the Supremes coming next month: “It is time for politicians of all political stripes to stop fighting climate action,” he said, “and start fighting climate change.”

Big Business takes a stand: On Monday afternoon, four major national voices banded together to speak out on the blockades. The Business Council of Canada, Canadian Chamber of Commerce, Canadian Federation of Independent Business and Canadian Manufacturers & Exporters all called reconciliation an “economic and social imperative.” But in the next breath, they urged governments to commit to a “serious, structured and ongoing” conversation with Canadian business.

Jason Kenney still holds a commanding lead in Alberta: “If the provincial election were held today, which party would you vote for?” That was the question posed by Mainstreet Research in a new poll commissioned by our very own 338Canada. The response mostly won’t surprise you (but click through for the full results).

The real betrayal of Albertans? Scott Gilmore chimed in on the fallout of Teck Resources moving on from the Frontier proposal. Here are the first few lines. Spoiler alert: disdain lies ahead.

I dislike career politicians as a species. Until this week I couldn’t explain to myself precisely why. All I knew was that if someone has spent most if not all of their adult life in politics, there is an almost certain chance they make the hair on the back of my neck stand up. I disentangled this personal puzzle as the Teck Resources issue percolated in the news over the last week.

Believe it or not, there was other news yesterday—and more to come today.

The NDP tabled a pharmacare bill that followed through on Jagmeet Singh‘s promise at the start of the parliamentary session that he’d prioritize this issue over all others.

A big gamble: NDP MP Brian Masse will table single-event sports betting legislation today. Masse has long championed similar (failed) bills—not altogether surprising given the location of a massive Caesar’s Palace casino in his riding in Windsor, Ont., which employs hundreds of local workers right across the river from Detroit.

The People’s Party of Canada appears to be crumbling slowly. CBC News reports that dozens of the party’s riding associations, which were established impressively quickly in advance of last year’s election, were deregistered by Elections Canada. The reason: they didn’t submit all the required paperwork on time.