Politics Insider for Sept. 30: The feds pre-purchase millions of 'point-of-care' tests, 338Canada on the state of play south of the border and sit back, relax and watch the bison roam 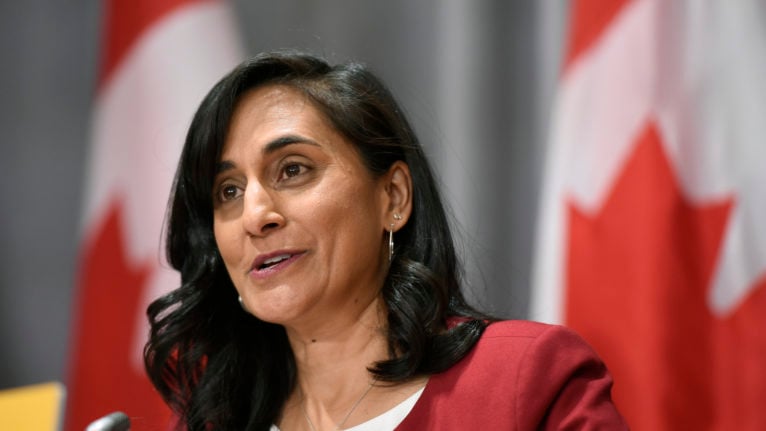 Minister of Public Services and Procurement Anita Anand speaks during a news conference on the COVID-19 pandemic on Parliament Hill in Ottawa, on Friday, Sept. 25, 2020. (Justin Tang/CP)

Yesterday, Procurement Minister Anita Anand announced the feds signed an “advance purchase agreement” to buy 7.9 million rapid tests from Abbott Laboratories. Those tests, which could produce quick results and be administered in doctors’ offices, haven’t yet been approved. The feds are now shifting from tests meant for provincial labs to these so-called “point-of-care” tests, writes Patricia Treble in Maclean’s.

Health Canada says part of the reason for the delay in approving such fast tests is that it had prioritized authorizing the type of devices required by public health officials, in particular lab-based PCR tests. Now, as cases surge but provinces want to keep their economies and societies open, the focus is shifting to point-of-care tests, and specifically antigen tests, which are easy to use, a senior federal government official said today. “They are now our No. 1 priority,” she said, while cautioning that “we want to make sure we are in no way compromising the safety of the devices.” There are six such antigen tests under review at Health Canada, a spokesperson said.

The Parliamentary Budget Office’s latest economic outlook report, another series of predictably gloomy projections, landed with a thud. “We expect that the COVID-19 pandemic and oil price shocks will have a permanent impact on the Canadian economy,” reads the report. The number-crunchers offered a tiny scrap of a bright spot in the form of a projected federal deficit this year of $328.5 billion—$15 billion smaller than the last federal guess in July. The PBO says federal debt will reach $1.3 trillion by 2026, when the debt-to-GDP ratio will sit at 47.3 per cent. The report comes with a huge asterisk, however, because it “assumes that there will not be a severe second wave of infections.” That second wave is now underway.

During the first presidential debate of 2020, President Donald Trump was a perfect caricature of himself, speaking in hyperbolic soundbites that couldn’t have sounded more off-the-cuff. Former vice president Joe Biden appeared alternately incredulous, amused, confused and pained by the experience, letting out a “Would you shut up?” within the first 20 minutes of Trump’s incessant interjections.

Where the U.S. election will be won or lost: Maclean’s contributing editor Philippe J. Fournier is keeping a close eye on the presidential race. As Trump and Biden faced off in the first of three debates, Fournier published his first of many state-of-the-race snapshots. Check out his full projections, which reflect a remarkably stable race in which the incumbent Trump still has a shot:

No U.S. presidential election in this century has measured a horse race as stable as the 2020 Biden-Trump race. Since April, Joe Biden has led consistently in the national numbers by an average of 5 to 10 points no matter what the news cycle brought—including a still mostly uncontrolled pandemic raging throughout the country. Even the Democratic and Republican conventions in August did not manage to move the needle significantly, a rarity in election years south of the border.

A distraction from the drama: With so many eyes on the boisterous debate south of the border, your newsletter correspondent offered our American neighbours an alternate universe in which leaders debates stick to public policy instead of personal shortcomings—and when they do get personal, they steer clear of insults and strike knockout blows that shift the electoral ground. Recall the 1984 federal leaders debate:

John Turner, the Liberal leader who’d been prime minister for just three months after Pierre Trudeau’s retirement, hoped to win his own term in power. Brian Mulroney, the Tory leader for just over a year at that point, hoped to prove to voters that he was the real deal. And Ed Broadbent, the NDP leader, hoped for an electoral breakthrough for his social democrats.

Elsewhere, Canada’s ambassador to the UN, Bob Rae, didn’t even need all 90 minutes of the debate to drain a bottle of wine.

Not that finger, please: So far, the hybrid model of parliamentary voting in Ottawa has produced some Kodak moments. Liberal MP Nathaniel Erskine-Smith voted as he read his small child a bedtime story. Another MP voted from outside a Boston Pizza. Yesterday, an inevitable tech glitch produced guffaws when Liberal MP Emmanuella Lambropoulos failed to unmute herself to vote. As her hands flailed animatedly in front of the camera, Speaker Anthony Rota mistook an index finger for the next one over. Cue the laughter. Watch the moment of levity.

In the wake of Canada’s reckoning with a crisis in old folks’ homes hit hard by COVID-19, the B.C. Government and Service Employees’ Union published the results of a provincial poll on long-term care. The union found that a majority of respondents supported more non-profit homes in the province. When the results exclude undecided respondents, the results are even more stark: 71 per cent either strongly or moderately prefer not-for-profit operators, and 73 per cent say the role of for-profit operators should be reduced to some degree.

Sit back, relax and watch the bison: These are stressful times. We could all use a distraction that embraces a bit of zen. Thank god for Grasslands National Park, where explore.org has powered a constant live feed of a popular watering hole in the Saskatchewan park—for, you guessed it, thirsty bison. Why not watch the sun rise with these magnificent beasts?