Politics Insider for April 29: MPs navigated oh-so-many technical hiccups to do some democracy, Theresa Tam put out new pandemic projections and watch out for Nickelback 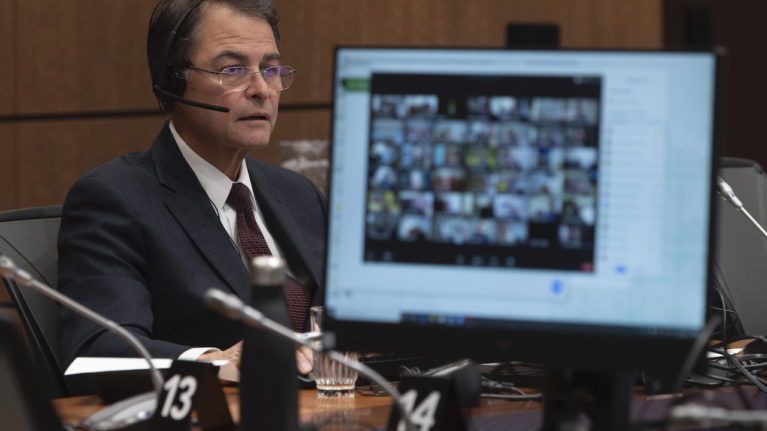 Speaker of the House of Commons Anthony Rota speaks during a virtual session of Parliament Tuesday April 28, 2020 in Ottawa. (Adrian Wyld/CP)

Parliamentary pedants were rightfully annoyed by sloppy terminology emanating from the offices of the Prime Minister Justin Trudeau and Deputy PM Chrystia Freeland. Both released itineraries that referred to yesterday’s meeting of the special committee on COVID-19 as a “virtual sitting of the House of Commons.” Of course, the committee being only a committee means yesterday was decidedly not a House sitting, even if hundreds of MPs joined.

And join they did, almost all of them.

The clunky committee proceedings, chaired by Speaker Anthony Rota, left MPs to figure out the everyday Canadian problems of figuring out Zoom and negotiating dreaded system updates. As Rota made opening remarks, Finance Minister Bill Morneau briefly popped up on camera. When Rota ceded the floor to Health Minister Patty Hajdu, a long delay ensued as she figured out how to unmute herself. Conservative MP Matt Jeneroux was interrupted briefly by some harmless chuckling from the mic of Treasury Board President Jean-Yves Duclos. The Bloc leader, Yves-François Blanchet, was momentarily distracted by his buzzing phone. Watch a full replay of all the antics.

A makeshift virtual question period proved to the country that Justin Trudeau and Andrew Scheer, sitting down and separated by the ether, can speak in their indoor voices—as if the explosive theatre offered by the physical House chamber is engineered for theatre’s sake.

Today, the Commons will meet in-person, in reduced numbers, to debate a student aid bill—but only after another in-the-flesh meeting, featuring the same MPs, of the special committee. Eventually the hope is to convene a full virtual Parliament, and a Commons committee is furiously hashing out how to make that work. Thus concludes this morning’s lesson in pandemic-era civics.

As the House worked out the technical kinks, Theresa Tam gave the country the Public Health Agency of Canada’s newest modelling on coronavirus’s spread across Canada (check out the slides). The documents revealed a remarkable statistic: 2,012 of 2,561 deaths, as of April 26, were linked to long-term care and seniors’ homes. Patricia Treble, writing in Maclean’s, breaks down all the projections. Later on, the PM posted a series of federal-provincial shared guidelines on how to re-open the economy.

In his morning presser outside Rideau Cottage, Trudeau thanked Canadians for kind messages about his mother, Margaret, who was in hospital after a fire in her Montreal apartment building—but was “doing just fine.” The PM also thanked first responders in Fort McMurray, Alta., where floods have wreaked havoc. Read Trudeau’s full remarks.

The Parliamentary Budget Office yesterday published its latest number-crunching on the cost of COVID-19 emergency spending. The PBO calculated the cost to the federal treasury of paying an estimated 10,000 Canadian Armed Forces reservists to be ready to fight floods and forest fires this summer. Now you can add $456 million in unforeseen spending—a relative pittance!—to the overall federal pandemic response.

If you’ve filed a federal access-to-information request since March, you might have been told to expect long delays as work-from-home culture slows down the work of the bureaucrats whose job is to get you what you need. Now, Information Commissioner Caroline Maynard has sounded the alarm, cautioning in a new letter to cabinet the whole system is “in a critical phase and may soon be beyond repair if certain ongoing and developing issues remain unaddressed.”

Conservative Sen. Don Plett published a scathing press release in response to an announced ratification date for the new NAFTA of July 1. Plett says Tories only agreed to fast-track the trade deal’s legislation, Bill C-4, if all three countries ratified on Aug. 1. Dairy farmers had asked for that date because it lines up with their fiscal calendar—and, the industry said, could save millions of dollars. The Americans wanted to ratify on June 1. In the end, the three sides met in the middle. Plett called that compromise a “serious breach of trust.” Meanwhile, the Canadian Press has federal sources saying the government never guaranteed an August ratification.

An Ottawa city councillor says Nickelback, the band you definitely love or hate (or maybe pretend to hate but secretly love), is the cure to what ails lonely neighbours in his city. Tim Tierney, following the lead of the city’s stridently pro-Nickelback public health office, hopes mayor Jim Watson will support a motion that the mega-band’s hits be “played and sung in/on driveways and properties across Ottawa.” Tierney tweets #RespectTheBack. Locals might counter with #TooBad.