Politics Insider for Feb. 3: How coronavirus is infecting Canada's Huawei decision, and what Canadians want in a Tory leader 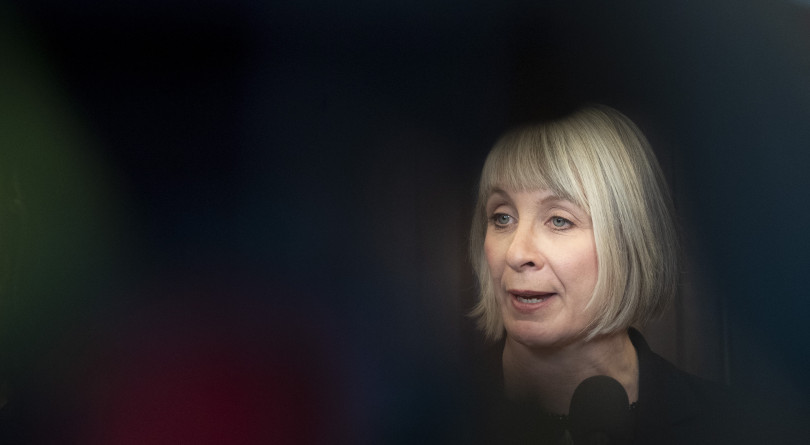 Minister of Health Patty Hajdu speaks with the media about the coronavirus following Question Period on Jan. 30, 2020 in Ottawa. (Adrian Wyld/CP)

As the number of confirmed coronavirus victims in the Chinese city of Wuhan swells into the quadruple digits, with more than 17,000 confirmed cases and more than 360 deaths, Canadian Minister of Health Patty Hajdu took to the Sunday morning political talk shows to calm  domestic concerns. On both Global’s The West Block and CTV’s Question Period, she defended Canada’s protocols, referring specifically to the government’s delay in withdrawing Canadians from the region (only a handful of Canadians even registered with Global Affairs, and it took time to confirm who was there and needed help) and how unnecessary quarantines and temperature-taking at airports are not effective methods of virus control (they spread needless fear). The risk of contagion, she pointed out several times, remains extremely low. “In terms of our own national preparedness,” she said on The West Block, “we are in line with the [World Health Organization] recommendations as they stand.”

Meanwhile, in China, Wuhan today opened its brand-new Huoshenshan Hospital, built in an eye-popping nine days. There’s still one more prefab hospital being built, which will open Wednesday. Click here to watch China’s national live stream of the marathon build, which has racked up to 40 million simultaneous viewers in China. (Cement mixers, the BBC reports, have become domestic memes, with fans choosing favourites and nicknaming them things like “The Cement King” and “Big White Rabbit.“)

Canada’s handling of the coronavirus crisis has become inescapably swept up in another strain on Chinese-Canadian relations: whether or not to allow Huawei, China’s state telecom, to help build our national 5G network. Huawei executives are arguing that they’ve followed every letter of Canadian law, and are not, as critics claim, secretly planning to spy on Canadians on behalf of their government. Richard Fadden, a former director of CSIS, called that claim “unmitigated phooey” on Question Period, eliciting an off-screen laugh from a fellow talking head. “We don’t know what we don’t know,” he said. “Secondly, there may have been any number of breaches the government of Canada has decided not to make public, but in any event, whether or not that happened in the past, it may not be happening now and the future’s totally unknown.”

The future leader of the Conservative party would do well to heed Scott Gilmore’s 10 tips for sure-fire success, including “Stop fetishizing rural Canada,” “Believe in climate change” and “Believe in individual liberty”:

Conservatives were once the loudest advocates for a person’s right to do whatever they damn well choose as long as it doesn’t affect others. Why have they forgotten this? I want the next leader of the CPC to not care who I sleep with, what I smoke or what gender I choose.

Elsewhere in these digital pages, Tabatha Southey is less eager to hear the Tory candidates’ opinions on LGBTQ rights, which seemingly boil down to Pride parades:

The question all political parties must ask themselves after a loss is, “And what have we learned?” Apparently, for Canada’s Conservatives the answer is that they need to get some of the Pride parade panacea. Just a few half-mile marches, a couple of hours at a street fair, and they will be unstoppable, seems to be the conclusion they’ve reached. Because, after an election cycle of being dogged (and he is the one who brought dogs into it) by questions about Scheer’s refusal to do the absolute bare minimum to show support for LGBTQ Canadians, what better response is there than to do the absolutest, barest, bare minimum that Canadians have ever seen?

And then there’s the whole French thing. Following leading Tory leadership candidate Peter MacKay’s embarrassing display of French last week, 338Canada’s Phillippe J. Fournier dug into recent polling to actual confirm the hotly debated question: How much do Canadians actually care if their leader speaks French? According to the data, 62 per cent of respondents said the next CPC leader should be bilingual. The provincial breakdown is perhaps unsurprising, with the strongest contingent of proponents in Quebec (87 per cent) and the lowest in Alberta (50 per cent). However, what’s more surprising were answers to the question, “If a federal election was held today and the CPC leader was not bilingual, which party would you most likely support?” The Tories, it turns out, would be decimated.

South of the Canadian border, the U.S. Democratic party’s nomination process kicks into high gear today, as Iowa caucus members head to the polls in the nation’s first state vote to nominate a Democratic contender. For more U.S. politics, watch for Maclean’s new U.S. politics newsletter in your inbox today at noon. (If you haven’t opted out, it should arrive automatically.)

And in case you missed it, Brexit happened on Friday. What changed? Pretty much nothing so far, thanks to an 11-month “transition period” established by former prime minister Theresa May. Presumably 2020 will be a year of horribly convoluted and prolonged international legalese for many British lawmakers. Happy Monday to them!