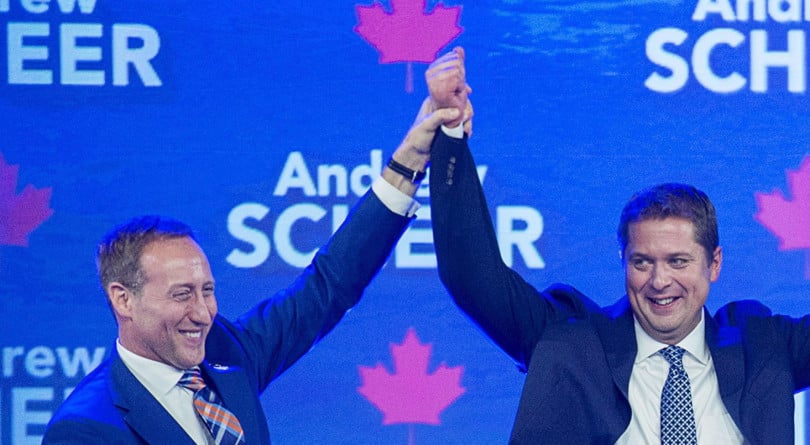 Happy Halloween. As little ghosts and goblins prepare to spook the neighbours tonight, Andrew Scheer is no doubt wondering where the next surprise attack on his leadership will come from.

Tell us what you really think: In the days immediately after the election Peter MacKay said that while he was disappointed by the Conservative Party’s poor performance, he was not angling for Andrew Scheer’s job. “I am supporting Andrew — full stop,” he said, right after noting “the job is not open.”  He might still be standing by the caveat that “the job is not open” but MacKay nevertheless just painted a large bullseye on Scheer. While taking part in a panel in Washington, D.C. MacKay said the Conservative’s loss “was like having a breakaway on an open net and missing the net.” The reason, he said: issues like abortion and same-sex marriage “hung around Andrew Scheer’s neck like stinking albatross quite frankly.”

Conservative MP Michael Chong conveniently sent around an FYI memo to the caucus Wednesday reminding them that new Parliamentary rules exist that, if adopted, could see a leadership review triggered if 20 per cent of Conservative MPs and senators vote for it. In that scenario a vote on Scheer’s leadership could theoretically be held as early as next week, though speaking anonymously one Conservative told the Toronto Star such a vote is unlikely to happen.

Diminished expectations: While Scheer’s fate is an open question, Jagmeet Singh, who arguably lost the most of any leader on election day, has for the most part avoided serious questions about whether he should keep his job. Even though under Singh the NDP lost one-third of its seats, shed nearly four percentage points of support from 2015 and saw its finances collapse, the fact the party wasn’t completely obliterated has been held up as a sign of success. “That’s life. Sometimes it doesn’t work out. We fought hard. We’re going to continue to fight hard,” Singh said Wednesday.

After a day-long meeting with surviving and departing NDP MPs in Ottawa, Singh laid out the top two priorities he wants Justin Trudeau’s minority government to pursue when Parliament resumes — universal pharmacare and ordering the government to drop its appeal of a First Nations child welfare ruling. A few things were notably absent from the more ambitious list of minority-support conditions Singh laid out before the vote, including more ambitious emissions reductions, a “super wealth” tax and more investments in housing. Those might come later, but it’s telling that no one from Trudeau’s office has even reached out to Singh since election day.

Trudeau’s options: To be fair, Trudeau has been busy calling Western political leaders to convey how much the region that completely rejected his party means to him. But Conservative MP Michelle Rempel is urging Trudeau not to appoint an unelected “Liberal hack” from Alberta as a sop to Western alienation. Instead, she said, he should reach out to Conservatives as well as “put on an ‘I love oil and gas’ t-shirt Justin Trudeau, you put on every other costume in the book.”

Speaking of which, will Trudeau go ahead with his traditional family Halloween costume parade, given that Trudeau in costume is a delicate issues these days?

May speaks up: Elizabeth May has long complained about the lack of civility in the House of Commons. With one foot out the door as leader of the Green Party, May is considering putting her hand up for the job of Speaker of the House: “”It interests me. It would be wrong to say it hasn’t interested me for a very long time,” she told CBC. “I think most members of Parliament know that I am less partisan, certainly, than most members of Parliament, certainly more non-partisan than any other party leader. … And I want Parliament to work because I love the institution and I respect our institutions and want to see them elevated and not degraded.”

The U.S. is sinking. Maybe it’s time for Canada to jump ship: Discussion of foreign policy was nearly absent from the election campaign, but in the latest Maclean’s print edition Scott Gilmore argues that with the American ship of state is leaking badly, it’s time Canadians ask ourselves whether we should help bail or build our own raft:

The instinctive answer is to grab a bucket. Traditionally, Washington has been Ottawa’s closest ally. Our militaries are deeply integrated and, until this administration, our foreign policy goals were usually complementary. Our friendship with America has given us a G7 seat (at the insistence of President Gerald Ford), a military shield that allows us to grossly underfund our own defence forces, and a powerful helping hand in times of need.

In the halls of Global Affairs Canada, the orthodoxy is that we sink or swim with Washington, and therefore, when the Trump circus finally leaves town, we should undoubtedly be there to help rebuild American prestige and influence wherever we can.