Searching for the Liberal Party. Day 1. 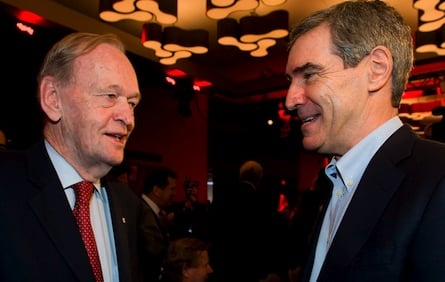 Greetings from Montreal, where, for the next three days, we’ll be hanging around the Liberal party’s Canada 150 conference. Herein a running diary of the proceedings.

9:36am. First things first, a requisite description of the surroundings. The conference centre at the Hyatt Regency doesn’t look anything like a conference centre. It looks like a terribly hip Swedish bar. The light fixtures are these silver blobby things hanging from the ceiling and the walls at either end of the room are emitting red light. The foyer is all white light and includes an actual bar. I believe the Cardigans are playing a set here tomorrow afternoon.

9:57am. Paul Martin has arrived. Let the party renewal commence.

10:00am. Jean Chretien arrives and proceeds with a prodigious display of hand-shaking.

10:05am. And we’re off. Which is to say we’ve started, with some opening remarks from Dominique Anglade, who is apparently fluent in five languages and has degrees in industrial engineering and business.

10:19am. Michael Ignatieff went without a tie this morning. Obviously really ready to let loose. All bets are now off on what might happen this weekend. He may remove his jacket. He may even roll up his sleeves. Buckle. Up.

10:26am. He opens with the idea of turning thought into action—arguably the central, if self-imposed, theme of his political career to date. He’s gone without a teleprompter and seems to be paying only passing attention to his notes and is, not surprisingly, sounding much happier. The teleprompter is the enemy of eloquence. When I convene my own thinkers conference next weekend, that will be topic number one.

10:34am. We’ve heard this before, but here is Michael Ignatieff’s Canada: educated, curious, innovative and international. Now to fill the sizeable blanks in between those adjectives.

10:36am. Quoting Lester B. Pearson at Kingston in 1960: “This is no dialogue of the decided.” Quoting Jean Chretien at Aylmer in 1991: “If we just give it another couple years, the Conservatives will be in tatters and we’ll waltz to victory.”

10:53am. The prepared text for Mr. Ignatieff’s opening remarks is here. (Though his speechwriter says much of what he said wasn’t on the page). You can also apparently follow along with the all of the proceedings here.

11:08am. General opening remarks now on foreign, social and economic policy. Odd experience listening to people speak at length about complicated matters without fear of interruption or scorn.

11:44am. The light in the room switches to purple and Rick Miner of Seneca College arrives to tell us about the future of the Canadian labour force. His central message seems to be that we’re doomed. And he has scary-looking bar and line graphs to demonstrate as much. Graphs are exceedingly difficult to argue with.

11:53am. In the future we’ll not be able to take summers off. And we’ll all have to have something more than a high school degree. This is getting dystopian.

11:58am. To avoid an absolutely dire state of affairs—”millions of people without jobs, millions of jobs without people”—we need a national strategy involving all levels of government. That’s apparently the good news. And, on that note, lunch is served. Let us repress our panic and fear with sandwiches.

1:07pm. Lunch was rudely interrupted by a press conference. A scribe apparently mindful of space in tomorrow morning’s paper asked Mr. Ignatieff to explain, in a sentence, what is at stake here. His sentence: “What’s at stake is whether the political system of our country can actually address the real problems the country faces.”

1:16pm. Keynote address from journalist and banker Sheryl WuDunn, wife of New York Times columnist Nicholas Kristof. The cause of our time, she says, is worldwide gender equality.

1:30pm. In addition to Ignatieff, Martin and Chretien, Stephane Dion, Bill Graham and John Turner are in the room. We are one Herb Gray short of a complete set.

1:54pm. And now a celebration of the Internet and the Twitter and all the ways in which people across the country are following and participating in these proceedings. Yes, yes, modern communication is fascinating. We will have truly progressed as a society when we stop being impressed by our ability to speak to one another without necessarily being in the same room. The first phone call was completed more than 130 years ago. Let’s try to maybe get over it.

2:09pm. A discussion now of learning and education. The high school dropout rate among the wealthiest is apparently between six and 11%. Among the poorest it’s between 50 and 60%. That seems staggering.

2:12pm. Stephane Dion is sitting in the row in front of the media table. Two photographers have set up at the end of the row, perhaps four feet from him, and are snapping away shots of him as he watches and listens to the discussion on stage and pretends not to notice. Politics is a bizarre existence.

2:16pm. Former Liberal cabinet minister Lloyd Axworthy, now in charge of the University of Winnipeg, with the best—well, only—joke I’ve ever heard about university presidents. “We’re like caretakers at a cemetery. There are lots of people under us, but they don’t listen.”

2:37pm. Stepped out for a moment and return to a question about provincial jurisdiction, educational reform and the constitution. It is somewhat remarkable that anyone would want to govern this country.

3:01pm. The answer to what is needed to put together a national education policy is apparently this: political will. That’s probably the answer to a lot of questions here. Actually, maybe all of them.

3:20pm. To put this weekend in perspective it is probably a prerequisite that you read Andrew Potter’s essay for the Literary Review of Canada. A short break now and then an hour and a half on innovation. And then a cocktail reception with the Liberal leader.

3:40pm. I’ve just become embroiled in a discussion about adult literacy, post-secondary education, business ethics and railroad protocol. It is going to be that sort of weekend.

4:31pm. This discussion now seems to hinge on an argument Roger Martin, dean of the Rotman School at the University of Toronto, made that we lack a national innovation policy. It is a compelling suggestion, not least because, by his estimate, it wouldn’t involve money that isn’t already being spent.

5:00pm. An attendee proposes the creation of a Parliamentary committee on the future. Apparently Finland has one. Here is video from a recent meeting of the committee.

5:15pm. And after a few wise words for Mr. Ignatieff—measure output, not input; simplify—it is time to drink and mingle and speak in jargon about complicated matters.