Should Brenda Lucki keep her job?

Politics Insider for June 16: Abacus Data looks south of the border for voter insight, two big Navy ships cost so much more than a decade ago and Canada Day goes virtual 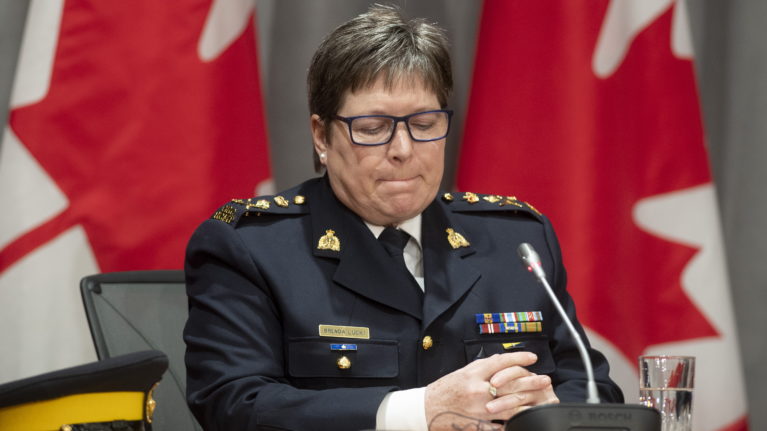 Lillian Dyck, one of Canada’s reinvigorated Progressive Senators, is the first parliamentarian to call for the resignation of RCMP Commissioner Brenda Lucki. Dyck said Lucki’s recent struggle to define systemic racism, followed a day later by her acknowledgement that Mounties do need to reckon with racism on the force, is “paradoxical and unacceptable as a leader.” Dyck recalled Lucki’s two-year-old commitment to the national MMIWG inquiry that the RCMP would “do better” in its interactions with Indigenous people. The senator says the commissioner “does not possess the knowledge or leadership skills to keep her promise.”

Dreaming is the easy part: Paul Wells stitches together the fabric of Liberal dreams, a cornucopia of innovation and techno-futurism brought to you by big-name tech giants and fair-weather trade partners. The governing party’s post-pandemic dreams are ambitious, but the important truth is that they’re also never as easy in real life as they were on paper:

“What we’ve all been reminded this year, with brutal finality, is that complex problems actually don’t get solved with innovation and partnership that you can see from the moon. Complex problems are a slog. They’re boring. They’re no fun. As one example among many, they look like long-term care homes where the staff needs decent pay and tolerable work conditions. Getting there from here is the kind of dreary, discouraging work that self-impressed governments like to avoid while they build still more monuments to their own cleverness.”

Abacus Data is dipping its toe into the rough seas of U.S. election polling. Yesterday, Abacus published its first data from a south-of-the-border survey—more coming all week—and found Joe Biden enjoying a 14-point lead over Donald Trump. Among only white voters, the two are in a statistical dead heat, with Trump at 44 per cent and Biden a point back. Even among college-educated white respondents, Biden only leads by a point (45-44). Last week, Abacus’s Bruce Anderson hinted at provocative polling to come.

The National Post penned the latest chapter in the murky saga of Marwan Tabbara, the former Liberal MP who is accused of watching a home in Guelph, Ont., for several months, before eventually breaking in and assaulting two victims—one man and one woman. The local police alerted nobody to the arrest. Tabbara didn’t tell his party. He just slipped back into regular programming (though, in a statement, the MP said he’s been receiving “counselling and treatment for anxiety and depression”).

Pull out all the stops: Tomorrow, the UN will either pick—or reject—Canada to sit on the security council for two years. Yesterday, three cabinet ministers announced the Canadian Armed Forces would respond to an “urgent request” from the UN to airlift medical and humanitarian support to African and Middle Eastern nations—the very countries that Canada needs to win. Prime Minister Justin Trudeau also met with the 13-nation “Ottawa Group” on world trade reform that hopes to salvage a semblance of rules-based order. It’s not the Oslo Group or the Dublin Group, now is it?

The PM will get on the horn today with four prime ministers: Pedro Sánchez of Spain, who may be dangling one of his country’s vote at the expense of either Ireland or Norway; Abiy Ahmed of Ethiopia, a member nation of the African Union, a key voting bloc for Canada; Ralph Gonsalves of Saint Vincent and the Grenadines, a small island nation of the sort Canada has courted for months; and Narendra Modi of India, whom Trudeau last called on April 28. The PM will then make a final pitch to UN voters by videoconference.

When Stephen Harper’s government decided to build two brand-new auxiliary ships that would refuel and resupply Canada’s Navy at sea, they reckoned the pair would cost $2.6 billion. That was 2011. Nearly a decade later, the ships—originally meant to be in service last year—are years away from water. And the feds announced yesterday the total cost is now expected to cost $4.1 billion. The delays and overruns offer taxpayers a truly bipartisan accomplishment.

Reefer relief: Health Canada is wondering if the pandemic’s negative economic effects have trickled down to Canada’s nascent cannabis industry. The “director general of strategic policy, cannabis”—now there’s a bureaucratic title for Canada’s man with a pot plan—published a notice of consultation in the Canada Gazette over the weekend. The department may defer payment of annual fees for cannabis licence holders. A bud bailout, if you will.