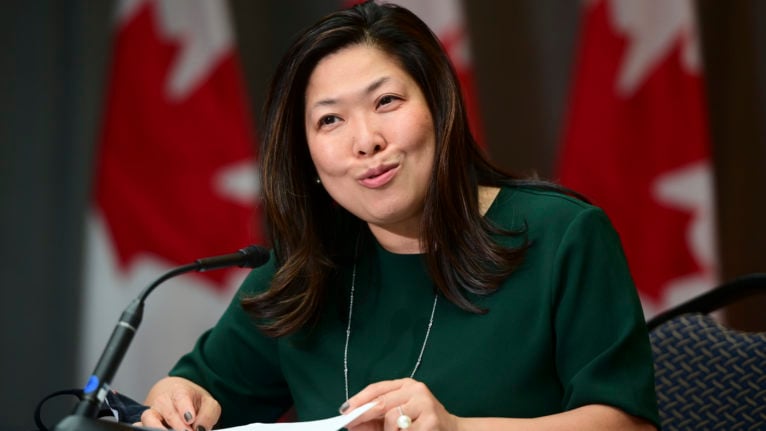 Minister of Small Business, Export Promotion and International Trade Mary Ng takes part in a press conference on the second day of the Liberal cabinet retreat in Ottawa on Tuesday, Sept. 15, 2020. (Sean Kilpatrick/CP)

It had been a few weeks since a Canada-U.S. trade spat was in the news. Yesterday, Trade Minister Mary Ng lashed out at Americans for appealing a World Trade Organization ruling on softwood lumber duties that favoured the Canadian argument. Ng’s press release was fairly direct, but Canada’s statement at the WTO dispute settlement body used even stronger language. “Canada is deeply concerned by the United States’ actions which frustrate the proper functioning of the dispute settlement system,” read the statement. “The United States’ behaviour significantly reduces the security and predictability that we collectively value in international trade.”

This isn’t the first time Canada and the U.S. have clashed at the WTO in recent years. In the midst of NAFTA renegotiations in 2017, Canada filed a massive set of complaints against American trade practices. In response, U.S. Trade Representative Robert Lighthizer called the filing a “broad and ill-advised attack” that is “unfounded.” Yesterday’s Canadian statement took a shot at Lighthizer: “Canada was surprised that the United States has appealed given the stated position of the U.S. Trade Representative that there is no need for an Appellate Body. ”

Yesterday, Ontario Premier Doug Ford warned that the province’s second wave of COVID-19 could turn into a “tsunami.” At a daily briefing, the premier said the province would spend millions on hiring health-care workers. And he urged Ontarians to consider a career on the front lines. “Whether you’re a young person applying to college or university, or someone thinking about their next career, please consider joining the fight,” he said. Earlier in the day, the province announced 700 new cases just as the Ontario Hospital Association urged the government to roll back its reopening. Read Ford’s full remarks.

Until now, no Canadian had ever run for the presidency of the Inter-Parliamentary Union, a global group of cooperative elected people. But Salma Ataullahjan, a Conservative senator from Ontario, threw her hat into the ring. Ataullahjan has worked with the IPU for a decade and currently heads up its committee on “Middle East Questions.” The IPU is another international org abandoned by Americans, this time in the pre-Trump era. A buried item in a 1998 omnibus bill terminated the Yanks’ longstanding membership the next year—after the IPU’s executive committee complained the U.S. had literally stopped paying its dues.

NDP MP Rachel Blaney asked the Parliamentary Budget Office to dig into the backlog of disability payment requests facing military veterans. The PBO reported that current staffing levels, which have been temporarily increased, would reduce the backlog—which ballooned from 20,693 in 2017 to 49,216 earlier this year—by about 10,000 applications. If the feds extended those temp jobs into 2023, the backlog could disappear that year. The PBO estimates that Veterans Affairs Canada could eliminate the backlog in 12 months with the help of another 392 temps (whose jobs would cost $33 million this year).

The federal Greens expressed dismay that a company almost wholly owned by the Canada Pension Plan Investment Board would donate $600,000 to a Republican political action committee. In fact, Crestone Peak Resources did donate a total of $600,000 to three separate pro-Republican PACs in 2018. More recently, the company’s CEO co-signed a full-page, pro-fracking ad in the New York Times. The Greens claimed Crestone’s board chair, Avik Dey, works for the CPPIB. In fact, Dey’s off the Crestone board—but the CPPIB still has a rep at that table.

The least glamorous job in politics: New Brunswick Liberals appointed Roger Melanson to the job nobody wants, per se. Melanson, an MLA since 2010 and a former finance minister, will serve as temporary leader after the party’s crushing election defeat earlier this month. It’s a bit of a crisitunity, really. Rona Ambrose scored so well in the same role after Stephen Harper‘s resignation in 2015 that plenty of Tories hoped she’d run this year.

Over the weekend, while driving east down Montreal Road, your newsletter correspondent was reminded that the nerve centre of Canada’s intelligence community—the respective HQs of the Canadian Security Intelligence Service and Communications Security Establishment—is plainly visible across an expansive lawn that stretches south from the National Research Council’s sprawling campus. Yesterday, on #GoodNeighbourDay, CSIS took hiding in plain sight to a new level—tweeting gifs at its fellow federal agencies.