Some things Jody Wilson-Raybould could help clear up

The SNC-Lavalin waters are thoroughly muddied, but if the former AG testified again there are at least three points that now need addressing 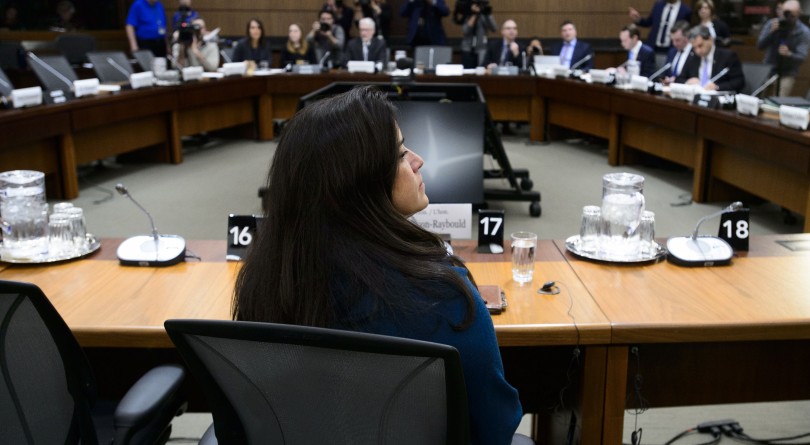 Wilson-Raybould appears at the House of Commons Justice Committee on Parliament Hill in Ottawa on Wednesday, Feb. 27, 2019. (THE CANADIAN PRESS/Sean Kilpatrick)

Jody Wilson-Raybould’s Feb. 27 testimony to the House justice committee on why she quit Prime Minister Justin Trudeau’s cabinet over the SNC-Lavalin affair set out a version of events that has now been contradicted on key points by Trudeau, his former principal secretary Gerald Butts, and Michael Wernick, the top federal bureaucrat.

Wilson-Raybould, the former justice minister and attorney general, and then briefly veterans’ affairs minister, has offered to appear again at the committee, but the Liberal MPs who are in the majority on it have so far voted against recalling her. Here are three key points—and there are lots more—on which anybody following the ins and outs of the saga must be hungry to hear again from its central figure.

How clear was she about her SNC-Lavalin decision being final?

According to her testimony, Wilson-Raybould told Trudeau and Wernick unequivocally on Sept. 17 that she had made up her mind not to step in to help SNC-Lavalin avoid a criminal trial, and wouldn’t be changing it. In a dramatic part of her statement, Wilson-Raybould said she challenged Trudeau on whether he was trying to interfere in her decision-making as attorney general. “The Prime Minister said, ‘No, no, no—we just need to find a solution’,” she said.

However, Trudeau said today that he took Wilson-Raybould’s agreement to talk to her deputy minister and to Wernick as confirmation that she might just change her mind. “I told her that I was preoccupied with the number of jobs involved in this in Quebec and obviously across the country. This is something that I was clear on,” he said at a news conference today. “She indicated to me that she had made a decision. I asked her if she could revisit that decision, if she was open to considering, to looking at it once again, and she said that she would.”

Butts wasn’t at that Sept. 17 meeting, but he testified about it. “Following the Sept. 17 meeting the attorney general had with the clerk and the Prime Minister, I was debriefed that the next step on the file would be to have the clerk and the deputy minister of justice meet with the Minister,” Butts said, adding, “If the Attorney-General had made a decision, and communicated it to the Prime Minister and clerk, why would there be a next step at all? Why would the attorney general take and solicit meetings on a closed matter?”

What was the tone of her Dec. 5 dinner meeting with Butts?

Among the most Ottawa elements in this story is the episode in which Wilson-Raybould and Butts meet for about two hours over dinner at the Chateau Laurier, the old railway hotel, steeped in Canadian political lore, just east of Parliament Hill. Wilson-Raybould’s account has her sternly telling Butts to call off his dogs on the SNC-Lavalin file. Butts’s version makes the dinner chat sound a good deal more congenial.

“Towards the end of our meeting,” Wilson-Raybould said, “which was in the Chateau Laurier, I raised how I needed everybody to stop talking to me about SNC, as I had made up my mind, and the engagements were inappropriate. Gerry then took over the conversation and said we need a solution on the SNC stuff. He said I needed to find a solution. I said ‘No,’ and I referenced the preliminary inquiry and the judicial review.”

Butts’s recollection of that exchange, in part, went like this. “She asked if I had a view on the file, and I said I understood our offices were working together on ideas. We talked briefly about the idea of asking a retired Supreme Court chief justice for advice, but I noted that I had no expertise in the matter.” On how they left matters, he said he doesn’t remember her complaining about Prime Minister’s Office staff pestering her. “I suggested she speak with the clerk or the public service for more expert advice,” he said. “I said that it was her call, and I knew it was her call. I have no memory of her asking me do anything, or to speak with staff about any aspect of this file.

Did all those references to Quebec’s politics clearly cross a line?

Among Wilson-Raybould’s eyebrow-raising complaints were about the way Liberal election concerns—especially about Quebec—were injected improperly into consideration of a criminal prosecution. On this, in her account, legitimate worries about lost jobs crossed a line into unacceptable discussion of Quebec politics, including last fall’s provincial election.

Wilson-Raybould spoke of how these anxieties arose at that Sept. 17 meeting. “The PM again cited potential loss of jobs and SNC moving. Then to my surprise, the clerk started to make the case for the need to have a [deferred prosecution agreement]. He said, ‘There is a board meeting on Thursday (Sept 20) with stockholders,’ … ‘They will likely be moving to London if this happens’… ‘and there is an election in Quebec soon’… At that point the PM jumped in, stressing that there is an election in Quebec, and that ‘and I am an MP in Quebec—the member for Papineau’.”

Yet Wernick denied those references to Quebec’s provincial campaign amounted to fretting about Liberal fortunes. “When I mentioned to the AG on Sept. 17 that there was an election in Quebec, I did not do so out of partisan considerations,” he said. “It is a long-standing convention for the federal government to stay out of the fray of provincial election campaigns. In mid-September… I was concerned that a purely federal issue [the SNC-Lavalin file] could surface in the last two weeks of that campaign. It’s my job to remind elected officials about those conventions.”

As for Trudeau, he said reminding Wilson-Raybould that his own riding is in Montreal—in the context of worried talk about what would happen if a Montreal-headquartered company suffered as a result of a criminal trial—wasn’t partisan either. “Yes, I mentioned that I am the member for Papineau,” he said. “But this comment was not of a partisan nature. It is our job as parliamentarians to defend the interests of the communities we were elected to represent.”