Sophie's role: What do we expect of prime ministers' spouses?

As Sophie Grégoire Trudeau copes with her workload, we talk to an expert about the 'vague, ambiguous' role of the PM's wife 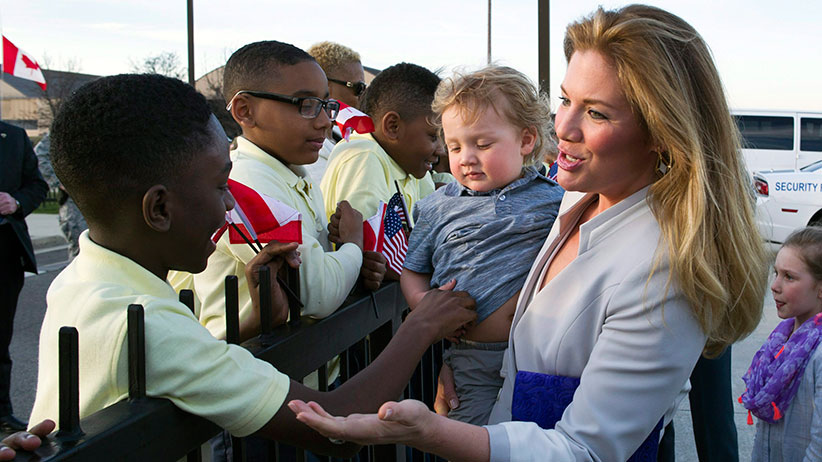 Sophie Grégoire Trudeau has recently spoken up about the fact that there are too many public demands on her time to juggle with the minimal staff she’s been allotted. Which raises the question: Exactly what do Canadians expect of their prime minister’s spouse, and what are they willing to supply to help them do the job? Maclean’s asked Elizabeth Goodyear-Grant, an associate professor of political science at Queen’s University, who specializes in gender and elections.

Q: How would you sum up the role of the prime minister’s spouse?

A: Vague. Ambiguous. It’s not institutionalized the way it is in other countries; the U.S. would be the most stark comparison. It’s an apparatus in the U.S. The first lady’s office is an official component of the White House, and she has a very large staff. She actually has a person on the payroll in charge of floral.

In the Canadian case, that institutionalization is not there at all. What it means is that over time, as the person in the position changes, the duties and public face of the prime minister’s spouse changes, too.

If we look at Stephen Harper’s wife, she was basically a non-entity in public. She maintained real distance from political life and just kept doing her own thing. Whereas other prime ministers’ wives—and Grégoire Trudeau is one of them—have been involved quite closely.

Q: What does that lack of definition mean for the role in Canada? Does it make it more difficult to navigate, or does that give them more freedom?

A: Probably both to some extent, but on balance I think it makes it more difficult. Especially for someone like Grégoire Trudeau, who is obviously committed to participating in and enhancing her husband’s political career. Because she doesn’t have the resources she needs to do it. Let’s think back to the fall, when the public—and some journalists—raised this big stink about the fact that there were paid nannies accompanying them on official visits where she was expected to perform a host of duties. And part of the story that’s come out now is she’s saying she’s overtaxed. Basically, her rope is fraying.

Now, we don’t need to go to the extent that the first lady’s office has in the United States, but there could probably be a stronger formalization of the resources and structure of the role.

Q: How would you define the first lady role in the U.S.? What are the expectations there?

A: She’s like the mother of the nation, isn’t she? Part of the reason why things are so formalized and so well-resourced in the U.S. is that the ceremonial and diplomatic functions of the U.S. president are so much more extensive than most other jurisdictions in the world. She, as a host, has a lot on her plate—more than the Canadian prime minister’s wife—and she always will. Being the most important country in the world comes with that. That’s part of the reason for the difference.

But not only is she expected to be the host on state dinners and state visits, the first lady has, going back to Eleanor Roosevelt, had her own very well-developed policy agenda. So if we think about Michelle Obama, it’s been kids’ fitness and obesity, and she’s had all these formal initiatives. She plays a very overt political role, and the public expects that and in many cases, embraces it. If we think of Hillary Clinton when she was first lady: welfare reform and education reform. Nancy Reagan: war on drugs. There were these really strong policy roles.
There’s more acceptance of a strong political role, and that could also play a role in how well-structured and well-resourced the apparatus around first spouses is. I suspect that if first spouses in Canada became as political as they are in the U.S., there could be some pushback.

Q: It seems like that is a line they are trying to walk with things like the nannies. To even say that Grégoire Trudeau needs more help or staff, right away you could see the eyes rolling, right?

A: Not just about the prime minister’s wife, but about a lot of public officials: let’s do the countdown to someone mentioning the taxpayer’s dime. But you don’t see that in the U.S. with the extravagance of the White House and the first lady, and also senators and congresspeople and governors. Americans expect it and wear it as a badge of pride, like, ‘We’re the best country in the world. You’re goddamn right we’re having caviar at the state dinner.’ They see it as a show of economic strength.

To be quite frank, Canadian public sentiment about providing these kinds of things for public officials is really cheap. Remember when Justin Trudeau was first elected and they were taking a look at the state of 24 Sussex, and how it’s crumbling? They act as though it’s going to be Jacob Zuma in South Africa spending $55 million on the house. Our purse strings are very tight, especially for public figures we see as somehow less legitimate because there’s no electoral basis.

Q: How much of the demand in Canada right now would you attribute to branding? It seems like a lot of the interest in the Trudeaus is, shall we say, aesthetic rather than political?

A: There’s a lot of that. Let’s not also forget her own background, in that she is a media personality in Quebec and she was quite a prominent one. She’s obviously someone who enjoys the public eye, together with Justin Trudeau—they both enjoy it and have been successfully using it politically. That’s not a critique, it’s just an observation.

And she is also part of constructing this happy, healthy, beautiful young family image—the beautiful, vivacious, intelligent, devoted mother is a very necessary component of all that. In a sense, it’s quite traditional, gender-wise. Especially if we compare it to someone like Harper’s wife or even going way back, to Joe Clark’s wife, Maureen McTeer.

Q: In the U.S., the first spouse role has always been a lady. How might that role evolve if Hillary Clinton were to win the presidency?

A: It’s kind of a funny case, because the first gentleman would be a former president in his own right, so he has this legitimacy about him politically that wouldn’t be typical. And he’s always been wildly popular, no matter what he did. He would be given leeway to do whatever he wanted. Now, I think it would become less gendered in the hosting functions of the office, the attention to what they’re wearing, and going on all the daytime talk shows—the things that first ladies have often done would probably be diminished. But it’s a bit difficult to sort of divorce it from thinking about Bill Clinton in that role.

Q: Do you ever get a sense when people are critiquing Grégoire Trudeau that they’re bringing other things to that have nothing to do with her specifically? It seems like she is a bit of a projection screen.

A: She becomes a target for critics of her husband, critics of Justin Trudeau’s attention to aesthetic. Not just how they look and what their family looks like, but all the staged events. Of course, politicians always do these, but there seems to be a perception that this is excessive in his case—all the selfies, the self-focus basically, and then capitalizing on that for political gain. Some of that is directed at her as well, as though she’s just a prop, so why are we giving her a nanny or why does she have staff?

Q: I was thinking about anxieties and criticisms of working mothers.

A: She does have a job—she’s the first lady of Canada. We should give her a paycheque, probably! [Laughs] There is a crew of staff that comes with the prime ministership. In addition to that house, you get people to cook for you, clean for you, shop for you. And if you have children, part of that is people to mind your children. The problem, too, is we often don’t have young people in the executive position, so it’s unusual to have these requirements.

I’ve felt really badly for Grégoire Trudeau at times, actually, because of all of this intense scrutiny and criticism of her and her family. She gets into the public eye, and it’s all venom. I think it’s really brave of her for speaking up and saying, ‘Look, I’m overburdened and I need help.’