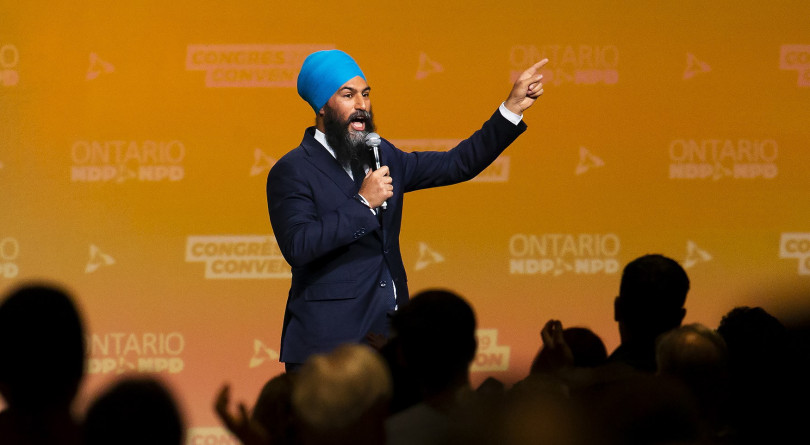 Contenders again: After a disastrous winter and spring, the Liberals may be creeping back into contention, writes Philippe J. Fournier of poll aggregator 338Canada. After factoring in several new polls into the 338 model, the Conservative lead over the Liberals has narrowed considerably:

This week, for the first time in months, it appears we have a statistical tie in the seat projection with the Conservatives at an average of 150 seats and the Liberals, 143 seats. The last time the 338Canada projection was this close was last February 24, when the Conservatives passed the Liberals in the middle of the SNC-Lavalin/Jody Wilson-Raybould saga. (Maclean’s)

(Check out the Surveys Say section below for more from the world of #cdnecon polling.)

Some syrup with that?: The meeting of the premiers before the meeting of the premiers involved pancakes, cowboy hats, and as much anti-carbon tax rhetoric as you can fit into a morning. Alberta Premier Jason Kenney hosted five right-leaning premiers — Doug Ford from Ontario, Scott Moe from Saskatchewan, Blaine Higgs from New Brunswick and Bob McLeod from the Northwest Territories — ahead of tomorrow’s all-premiers meeting in Saskatoon, a calculated move to seize control of the agenda, writes Paul Wells:

The idea here is to storm Saskatoon—with a cohort of colleagues that includes the host of the Saskatoon meeting, oddly enough—with a firm set of plans. Against the distracted mush most premiers usually bring to their summer meetings, it’ll be harder to resist.

It’s hard to blame most premiers for showing up with distracted mush, mind you. These are summer meetings, the last agenda item between sometimes bruising spring sittings of the provincial legislature (Hi, Doug Ford) and a sometimes very extended summer-into-late-autumn vacation from public scrutiny (Hi again, Doug Ford). It can be hard to come up with stuff to talk about. The agenda for this week’s Saskatoon meeting is generic. Listed items include immigration, trade, strategic infrastructure, strengthening the Arctic, health care sustainability, mental health and addictions. All worthy stuff.

But it’s easy to begin. What’s more telling is what endures, if anything. (Maclean’s)

Singh for his supper: It’s no secret the federal NDP have money troubles. The party trails far behind the Liberals and Conservatives in fundraising when it comes to raising money for the next election. Here’s one reason: since January NDP leader Jagmeet Singh has attended only one fundraising event where tickets were sold, for $25 each. The party defended Singh’s fundraiser-free schedule to the Huffington Post, saying it doesn’t believe in charging money to hear Singh speak. Not everyone in the party agrees, namely star candidate Svend Robinson: “Are you serious? Since the beginning of this year? … It doesn’t seem right.”  (Huffington Post)

Dear Justin: In Andrew Scheer‘s latest open letter to Justin Trudeau (earlier dispatches slammed his handling of China tensions, the SNC-Lavalin investigation and judicial appointment leaks) the Conservative leader said he would scrap the Trudeau government’s clean fuel standards, which he described as a “secret fuel tax … While you have never had to worry about paying more at the pump, for some families living paycheque to paycheque, an extra $100 a month matters.” In reality there’s nothing yet to scrap. A draft of the regulations isn’t expected until 2010 and won’t become reality until at least 2023. (Canadian Press)

Less of the same: Sensing a trend New Brunswick’s Higgs dropped his province’s legal challenge against Ottawa’s carbon tax, having watched courts rule against similar challenges in Saskatchewan and Ontario. Saskatchewan has taken its challenge to the Supreme Court of Canada. Said Higgs in announcing his decision: “Why would I, at this point, without being able to present a different argument … it wouldn’t make sense for me to go and use taxpayer dollars to go and present the same case.” (CBC News)