Teck support: Is a 'final rejection of Alberta by Canada' on the line?

Politics Insider for Feb. 7: Liberals come out opposed to an oil sands mine, Canadians are on the way home from Wuhan and should Canada train its judges? 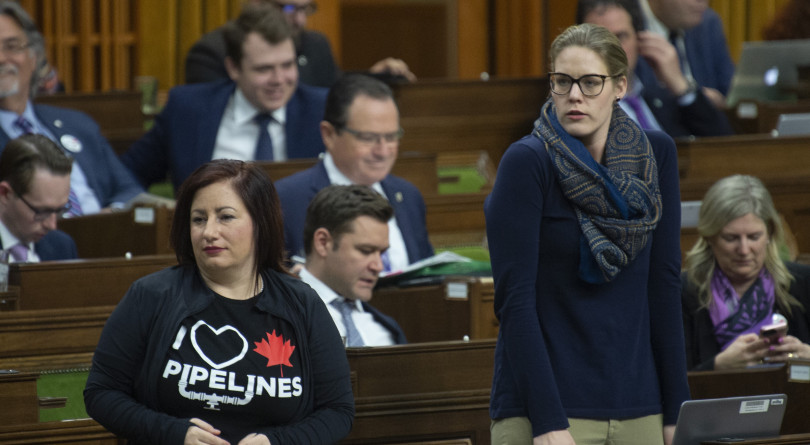 Conservative MPs Shannon Stubbs (left) and Rachel Harder rise to cast their vote during a marathon voting session in the House of Commons on March 21, 2019. (Adrian Wyld/CP)

‘The plane is wheels up’: So tweeted Foreign Minister Francois-Philippe Champagne yesterday afternoon, as a chartered airplane evacuated Canadian citizens out of Wuhan, the epicentre of a coronavirus outbreak in China. The government had secured space for 211 passengers, but Champagne said some no-shows meant fewer people were actually aboard. The long flight to CFB Trenton lands in Ontario this morning.

The Conservative Party’s moderate-centres have disappeared: Yesterday’s news from Angus-Reid that Tories have room to move to the centre seems not to have persuaded Michael Valpy and Frank Graves, who write in Maclean’s that any vestige of a centrist Tory party has long since evaporated:

The Conservative Party that most Canadians have known—the political centre that previously had the ability to find centre terrain on the most divisive issues of the day—has disappeared. What contemporary Conservative strategists and the media seem to have significant difficulty recognizing is that Canadian politics has become much more like American politics—it’s become tribal. And just as two Americas have taken root and blossomed, two Canadas are appearing on this side of the border.

Teck support: Any cabinet decision on a major energy project earns somebody’s ire, but the post-election calculus has grown even more complicated. Yesterday, Huffington Post Canada quoted several MPs in Justin Trudeau‘s own caucus as vocally opposed to the $20-billion oil sands mine proposal headed up by Teck Resources. Not all were so decisive. MP John McKay channelled the tough choice ahead with an old idiom: “I’m at sixes and sevens; I haven’t come around to it.”

Shannon Stubbs, an Alberta Conservative MP whose riding sits just south of the oil sands, cautioned on Twitter that a “political rejection” of Teck’s proposal “will be perceived by most Albertans as a final rejection of Alberta by Canada.” Not to put too fine a point on it. (Some trivia for your next dinner party: Dominic Barton, the ambassador to China and former head of McKinsey, was Teck’s chair of the board until he took on his government job.)

Should the Canadian government train its judges? Gib van Ert, a former executive legal officer at the Supreme Court, writes in Maclean’s that Bill C-5, which mandates training in sexual assault law for judges, creates a dangerously slippery slope. The legislation, a version of which was introduced by Rona Ambrose in the last Parliament, enjoys all-party support in the House. But van Ert wonders if it won’t unintentionally weaken the judiciary:

Unlike public servants, whose ultimate job is to carry out government decisions and policies according to law, judges are frequently called upon to scrutinize government action. The core idea behind that elusive phrase, “the rule of law,” is a society where we can meaningfully say that something done by the government was unlawful. The people empowered to reach that conclusion and give it consequences, are the judges.

For judges to hold governments to account like this, they need to have true independence from the executive and legislative branches of government. And people need to believe they have it. Who will bother suing the government if they think the judges are government stooges?

An activist public service? Sure, public servants are apolitical actors, hermetically sealed in their non-partisan chambers of bureaucracy. But how impartial are they really? The answer, according to a new report from the Public Service Commission, is the 287, 978 folks on the federal payroll produced a total of 18 complaints about improper political activity. Only seven led to “corrective actions”—a whopping 0.002 per cent of all employees.

The Canada Institute at the Wilson Center, a think tank in Washington, D.C., is a typical stop for visiting Canadian politicians. This morning, Alberta Premier Jason Kenney and Saskatchewan Premier Scott Moe will be on-hand to talk Canada-U.S. relations with POLITICO reporter Lauren Gardner. But the Institute has some personnel news: Christopher Sands, who’s been in the Canada-U.S. think tank space since the first NAFTA negotiations, was just named its new director. He replaces Laura Dawson, a familiar face on politics shows who took a gig at the Amazon Web Services Institute last year.

Where’s the PM? Trudeau arrives in Ethiopia today, the first stop on a short African tour that’s meant in part to court votes as Canada seeks a non-permanent seat on the UN Security Council. Trudeau has a special guest on his flight: Toronto Raptors president Masai Ujiri.