Terry Mosher, aka ‘Aislin,’ on 50 years of cartoon commentary

His career started with one Trudeau, and has carried on to another. Aislin, Montreal’s foremost cartoonist, talks to Maclean’s about half a century of pencils and politics 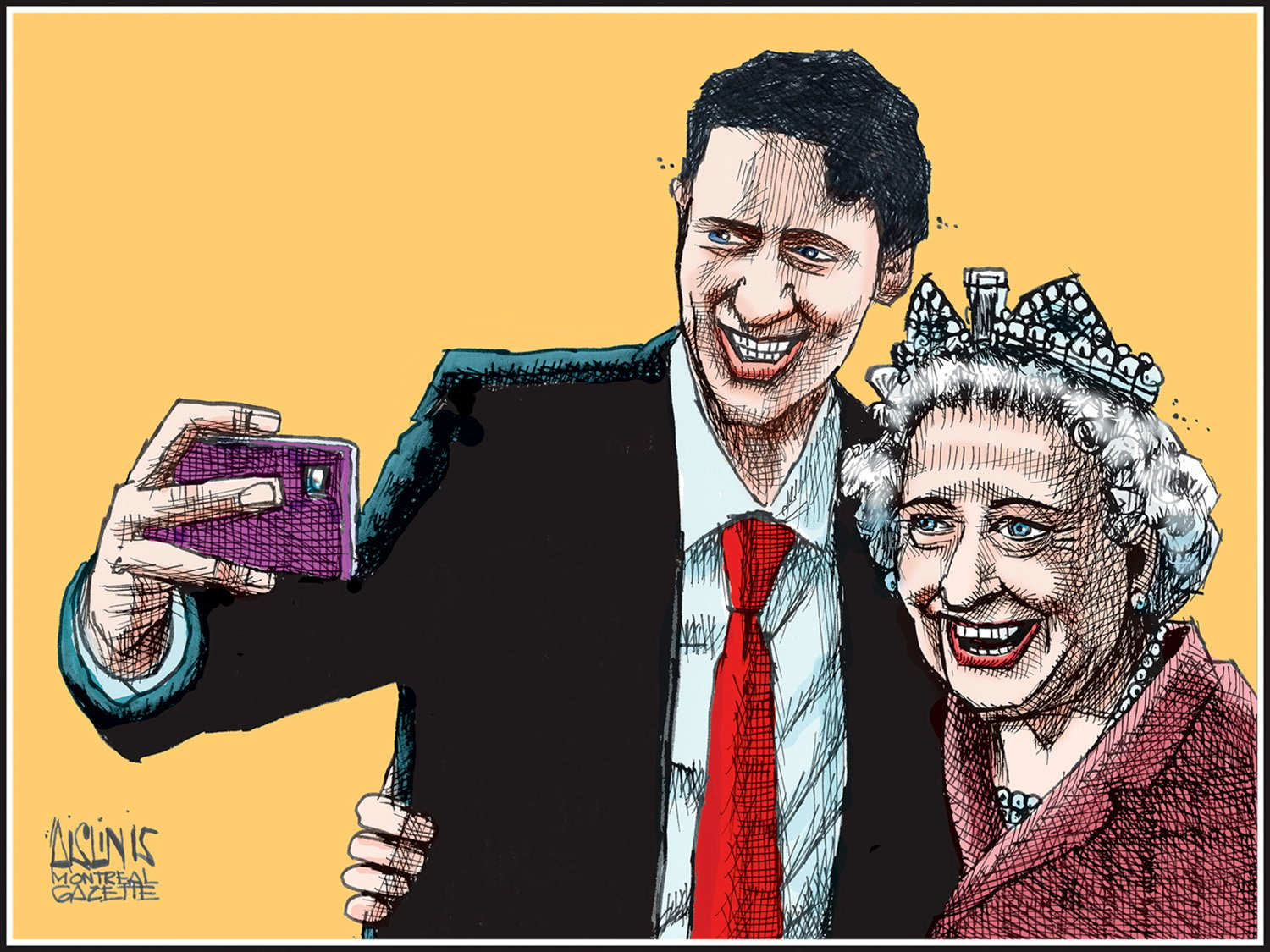 “The pen is mightier than the sword”—an overused proverb, but one befitting a cartoonist who’s made a mark on Canadian politics for one-third of the country’s lifetime. In 2017, Canada’s 150th birthday, Terry Mosher, more commonly known by his pen name Aislin (a play on his first daughter’s name: Aislinn), will also be celebrating a major milestone: 50 years of political cartooning. The achievement will be marked with the release of a new book and a travelling museum exhibit that starts next April at McCord Museum in Montreal.

Mosher started at the now-defunct Montreal Star in 1967, the year Pierre Trudeau entered the Liberal leadership race, moving to the Gazette in 1972, where he’s been since. But his resumé doesn’t end there. His cartoons have been on the covers of national magazines (including Maclean’s), he’s received the Order of Canada, and he’s an inductee into the Canadian Cartoonist Hall of Fame. Maclean’s talked to Mosher about his long and impressive career, and how the world of political cartooning has changed in that time.

A: Well, there was a great deal of serendipity in terms of how I got started and when I got started. 1967 was a magic year for Canada. Everybody was very optimistic because of Expo ’67, the hundredth anniversary of Canada, that sort of thing. But very shortly after that, things began to change quite dramatically, particularly here in Quebec. I wasn’t sure if I was going to work here, or in Toronto, or in New York, and I’m very thankful I settled in Montreal. Because shortly after 1967, Lester Pearson stepped down, Pierre Trudeau became the new prime minister of Canada, the Parti Québécois was formed a short period after that, then you had the October Crisis, the Olympics, never mind the Canada-Russia Hockey Series, I went to Moscow for that. So for a young cartoonist, it was a phenomenal, sort of varied experience, to be drawing material on all of these different matters.

Q: When you came up with that name, ‘Aislin,’ back in 1967, did you think that 50 years later that it would have the impact that it has?

A: No. I didn’t think that. Quite honestly, it started out as a bit of a joke. My daughter was born, and I had been drawing cartoons on the street, you know, portraits of American tourists and that sort of thing. As a joke, I began to sign these caricatures with her name, Aislinn, having no idea. I thought I was going to be a painter or something. But it just sort of evolved. Suddenly I was working for a lot of people as a cartoonist. There were so many different print publications at that time, it just happened to be an open market. I had no idea where I was going to go with this. There was no sort of calculated plan: I just began working for a lot of people. I really enjoyed it. I guess most importantly, the cheques didn’t bounce. (Laughs.) And I said, ‘Okay, well I’m going to keep going with this.’ Once I became a cartoonist, I began to learn more about it.

Q: Do you remember the first cartoon you had published in a Canadian publication?

A: Yeah, it was a drawing of Charles de Gaulle in September of 1967, and it was published in Saturday Night magazine.

Q: How did that feel?

A: It felt pretty good. Also, I hadn’t really learned the business at that time about size, that you can’t draw too big or too small in order for a publication to get the line, so I’d drawn it far too big. So it’s always a learning process—what I’m saying is they didn’t get the quality and it was my fault because I didn’t understand that process but I certainly learned quickly enough. 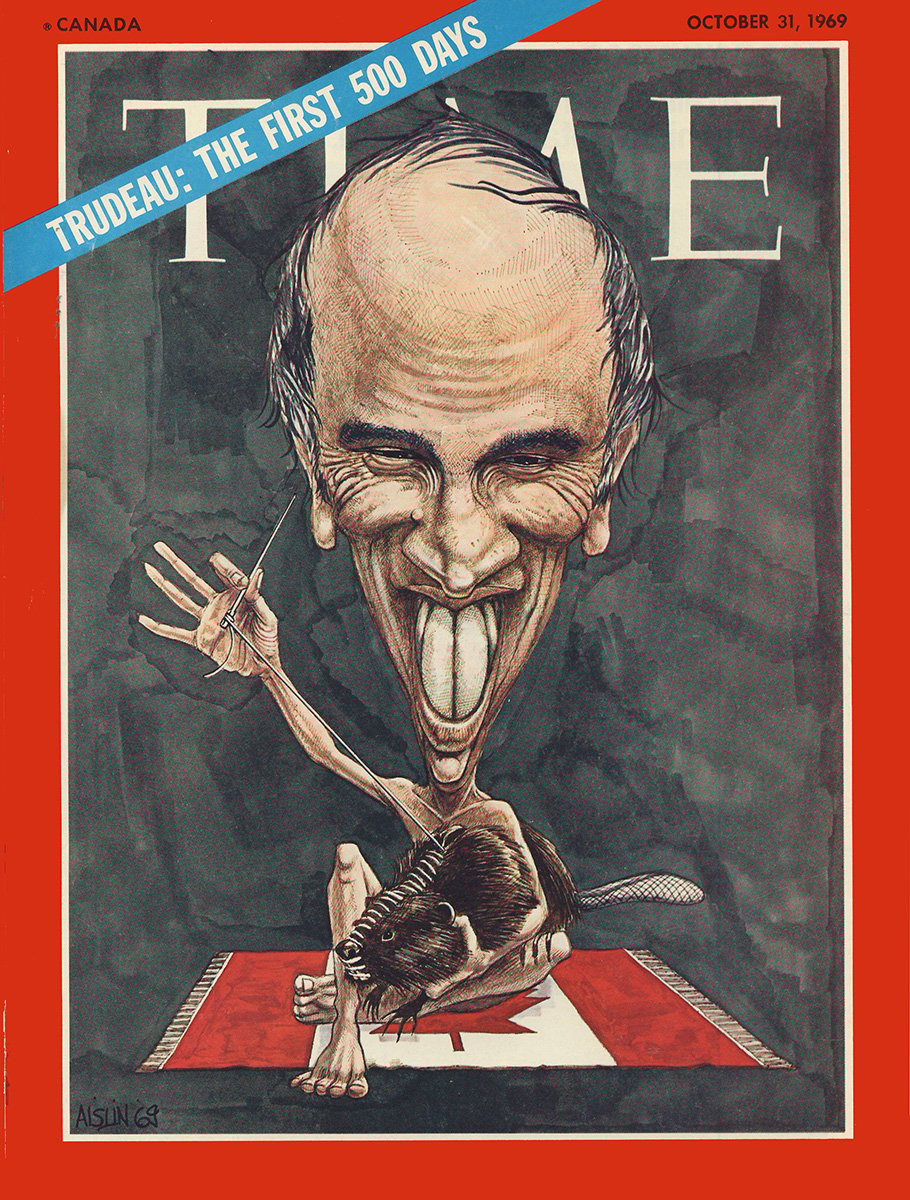 "Many cartoons I've drawn have been controversial, perhaps a little before their time, certainly when I was getting started. And I did a very strong cartoon of Pierre Trudeau as a Time cover of keeping the country together. And what he's doing is sewing up a beaver, but he's sewing up the mouth first. A bit of a joke about: Keep quiet and let's get on with this. There was quite a bit of a reaction to that. Also, it was quite an honour to be on Time magazine within a year or two of me starting out. I didn't mind the cheque either, for $1,000."

Q: You talked a little bit about where Canada was at in 1967, but in the past 50 years, is there a time in Canadian history that really stands out to you?

A: Oh, any number of them. I think Montreal, there’s so much that has happened here in the last 50 years. The Olympics; then immediately after that, the election of the Parti Québécois and the possibility of the country breaking up; the first referendum; then Brian Mulroney coming along, making a valid attempt to sort of hold things together after Trudeau; and then the fight for free trade; the Oka Crisis. It just goes on and on. The second referendum. So much material here to draw cartoons on and a lot of that material I’m sifting through now in order to put this book of 50 years or cartoons, and exhibition together, and it’s quite a job.

Q: Is there a particular person that stands out in those 50 years that maybe you really enjoyed drawing, or was an interesting character to draw?

A: Three or four of them. René Lévesque was certainly a delight to draw. As was the mayor of Montreal, the very colourful mayor Jean Drapeau. Actually, after René Lévesque retired, or he was actually really booted out in 1984, I thought my career might be over. But then along came Brian Mulroney, a totally different kind of character, but nevertheless, full of himself and wonderfully caricature-able. And then Lucien Bouchard came along, and more recently, Stephen Harper, and of course Justin Trudeau, just on the horizon with all kinds of interesting things. So despite that sort of reputation that Canada has of being a boring place, we really have produced really interesting politicians.

Q: You mentioned Trudeau, it’s a pretty amazing feat that you’ve been drawing since the original Trudeau now to this new Trudeau. Do you notice similarities between the two?

A: Oh, some. But there’s no question about it, Justin is his own man. It’s a different time. It’s a different age. I’ve had coffee with him a few times, and it’s amazing how plugged in he is to what’s going on today. A contemporary politician has to be cognizant of things that are going on. And he is that. So he’s a very different character from his father, his father was far more calculating, I think. He had to be, back in that time. Justin has a quality about him. It appears to be naive, but as politicians found out recently, it’s not at all that. It’s just sort of an openness. He picks stuff up. It’s going to be interesting to see where he goes.

Q: Cartoons offer a really interesting perspective of Canadian history—they’re often satirical, they make you laugh, they challenge things that newspaper articles and photographs can’t. What do you think your cartooning in the past 50 years has offered people in terms of how they view Canadian history?

A: I think any good cartoon sums things up for people. It’s kind of ironic we appear on the editorial pages of newspapers, but now of course we’re transferring over to the net, and that gets a lot more attention. A good cartoon, what it does, is sum up a situation, very neatly, as opposed to reading a lot of articles and so on. Take Rob Ford for example. It was sort of a group feed that cartoonists in Toronto had on Rob Ford. We were a little envious in this neck of the woods, because they had such an interesting character to deal with. I would give you a pretty good odds on what will be remembered about Rob Ford in 20 years is three or four particular cartoons. So it’s a summing up. And the public attitude. I think it’s important to understand that a cartoonist is not drawing for favourable reviews from politicians. What we’re trying to do is capture the popular feeling of the time about a politician or a particular political issue. For that reason I think it sums up public attitudes that is very helpful to historians down the road.

Q: How has the landscape changed for cartoonists in Canada, and do you think a young cartoonist starting out this year would have the same opportunities you had back in 1967?

A: Well, they don’t have the same opportunities, they have different opportunities, let’s put it that way. Look, despite the problems in print, and you know, there are many and it’s declining, although we certainly want to hold onto the responsible journalism that is created there as opposed to everybody just writing a blog. But what I’m saying is that it’s a different landscape now. For a young cartoonist, they have to get going on the web, because that’s where everybody goes for their information. And it really works. If you look at a cartoon on a computer screen, it really jumps and can be quite effective. I draw cartoons now, not how it will appear in the newspaper, but how it will appear on the screen. I think most of us do. Now the challenge is to make it move and animate it in a very fast, quick way.

Any young person who comes to see me, I say, ‘Look, forget about print. You gotta think in terms of getting going with websites and online and that sort of thing.’