That time the RCMP dropped a mid-election bombshell 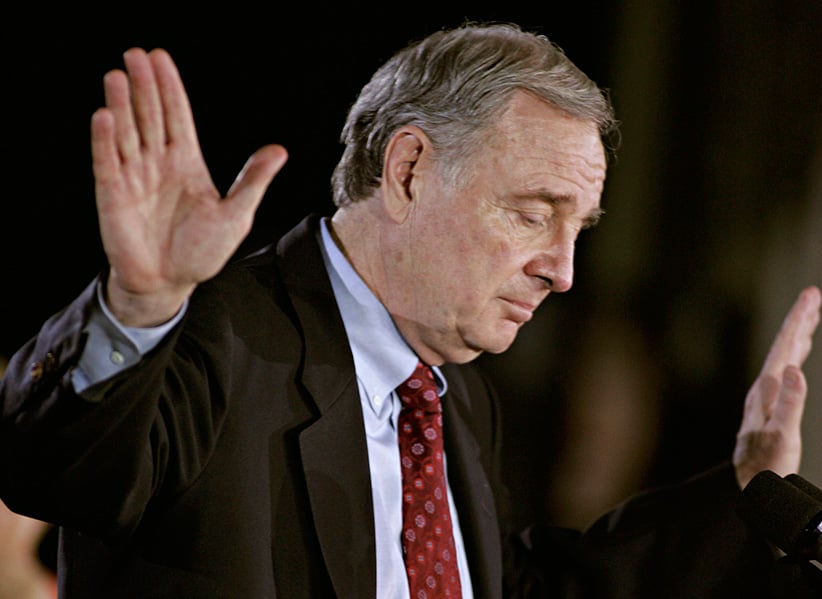 Law enforcement agencies don’t operate on political timetables. Mention this axiom to a Paul Martin-era Liberal, and they’re liable to shoot you some real stink-eye.

On Friday, the Hillary Clinton campaign’s election endgame was upended by the FBI’s announcement of new emails they would have to consider as part of the formerly shuttered criminal investigation into Clinton’s private email servers. Nearly 11 years ago in Ottawa, RCMP announced a surprise criminal probe that reached into the finance minister’s office, smack in the middle of the 2006 federal election campaign—the one that denied the Liberals a fifth term in office.

In the years since, former Martin deputy chief of staff Scott Reid has quarrelled with many counterparts about whether the scandal-mired Liberals would have lost in January 2006 with or without the RCMP’s mid-campaign bombshell. “Before that happened, we were ahead, and they were behind. After it happened, they were ahead, and we were behind,” Reid says now. “It was, by any objective standard, an enormously consequential event. In the context that we had been living through—13 years of government, the sponsorship scandal‚ it had straw breaking camel’s back written all over it.”

In the U.S., they call this an October surprise. The Canadian version was an early Christmas gift for Liberal rivals, in the form of a fax sent Dec. 23, 2005, to the office of Judy Wasylycia-Leis, then the NDP’s finance critic. A month earlier, she had written the RCMP, requesting an investigation into potential insider trading on government policy: Ralph Goodale, Martin’s finance minister, had announced he would not impose special taxes on the financial instruments known as income trusts. A flurry of trading in income trusts right before his announcement prompted suspicion there was a leak.

“We would like to advise you that a review of this matter has been completed,” Giuliano Zaccardelli, then commissioner of the RCMP, wrote to Wasylycia-Leis in the one-page fax. “Based on the information obtained during the review, the RCMP will be commencing a criminal investigation.” It was Week 4 of an eight-week campaign, which Paul Martin had to call after his minority government lost a non-confidence motion.

Tht RCMP investigation had all the hallmarks of a Christmas-spoiling revelation, though Goodale, Martin and their aides would enjoy turkey dinners and quaff their yuletide cognac while blissfully unaware of any criminal investigation they might care to know about. Wasylycia-Leis, the NDP member for Winnipeg North, was also unaware, that being the age of fax machines and few smartphones. Wasylycia-Leis found the fax when she checked into her office five days later, on Dec. 28. The NDP gleefully shared their gift online for all to see, and the finance critic called on Goodale to resign. The national police force followed up that day with a press release of its own that confirmed the investigation. “In particular, the RCMP wishes to note that at this time there is no evidence of wrongdoing or illegal activity on the part of anyone associated to this investigation including the Minister of Finance Ralph Goodale,” the release not-so-helpfully clarified.

Reid remembers that day well, and laughs bitterly as he recalls it. The campaign was taking a few days off around Christmas. He was sitting in the spare bedroom of his mother’s home when a senior government colleague phoned him about the NDP announcement and the RCMP follow-up. “My immediate reaction, everyone I knew (had the) reaction, that this is, as they say, an extinction-scale event,” Reid says. “You never said to yourself, ‘I am certainly dead and covered in leaves now,’ but you say, ‘This is a grave and gruesome threat to our survival.’ There was no naïveté with respect to how serious an issue this was.”

Paul Martin, since taking over as prime minister in late 2003, had tried to steer the Liberal ship into clean waters after Jean Chrétien and the sponsorship scandal took over Ottawa’s agenda. The Gomery commission’s report had laid bare the scheming and self-enriching Liberals had engaged in with taxpayer funds, but those stains weren’t from Martin’s time. Suddenly, the RCMP was probing some system-gaming in the Martin government, and even name-dropped Goodale in the announcement.

The damage to the Liberals was clear, or at least perfectly concurrent. According to a recap of all election-time polls, Martin’s party led in every poll released through Dec. 28. In every public poll from Jan. 1 to Jan. 23, the Conservatives were on top, and voters wound up favouring Stephen Harper’s side by 6.1 percentage points on election day.

But to a Conservative, saying the election turned on the RCMP investigation would attribute to outside intervention the legitimate accomplishment of the party’s first hard-fought victory of the Harper regime. Tory strategist Ken Boessenkool considers Zaccardelli’s news a mere blip in what was a Conservative rise—and Liberal slide.

“The RCMP investigation reinforced an existing narrative about the sponsorship scandal, but it didn’t introduce a new narrative or change the course of the election,” Boessenkool says. “All those trends were already there.”

The investigation continued to hang over Goodale and his office until February 2007, when police charged one Department of Finance senior official with breach of trust by a public official. (Serge Nadeau later pleaded guilty and was fined $14,000, double the amount of his financial benefit from his securities purchasing.) A second investigation followed as well: RCMP complaints commissioner Paul Kennedy looked into the RCMP’s disclosures and communications of their probe, and whether they had an impact in the democratic process.

Various senior RCMP officers spoke with Kennedy’s office; Zaccardelli, who had by then retired, did not, though he was under no obligation to do so. Kenendy’s 2010 report concluded that the national police had discretion about whether or not to inform the NDP there would be a criminal investigation. The RCMP itself acknowledged that naming Goodale in the news release “was not consistent with public practice,” the report states. Zaccardelli was directly involved in the the decision to single out Goodale by name in that release, according to Kennedy’s findings. As for political impact, the report notes the polls and the political consequences of not acting—but to the Liberals, there’s no question the RCMP dealt them a brutal and possibly intentional blow. “It appeared to be a premeditated and calculated course of conduct,” Goodale said in 2008. Now the public safety minister under Prime Minister Justin Trudeau, Goodale oversees the RCMP.

According to various U.S. media reports, FBI director James Comey may have little discretion in informing Congress’s Republican committee chairmen about the latest in the Clinton email saga; he could have faced serious trouble for not promptly updating past Congressional testimony about the FBI investigation. The Clinton campaign reacted with frustration about the timing and vagueness of Comey’s letter, released 11 days before the vote.

Eleven years after he suffered through the Liberals’ own law-enforcement gut punch, Reid believes this one may be less damaging to Clinton. But it could depend on how calmly her camp handles it. “In a circumstance like that, all those negative emotions and suspicions are not only pointless, they’re distracting and destructive to you,” he says.

The Liberals had four weeks to keep suffering—or recover from—the RCMP investigation announcement, unambiguously a criminal investigation suggested to involve the finance minister. Trump has barely a week to overcome Clinton’s poll lead, and she has just as long to downplay what’s not exactly a reopening of the private-server investigation. By Nov. 8, we’ll have a better sense of how much of a parallel to draw between 2006 Canada and 2016 United States.