The 10 most cringeworthy lines in Rolling Stone's Justin Trudeau profile

'For Trudeau, listening is seducing' and other awkward gems from Rolling Stone’s fawning profile of Canada's prime minister

The foreign press loves Justin Trudeau. He’s a big, shiny-haired opposite to Donald Trump, a walking advertisement for the kind of centrism and small-l liberal values other parts of the world seem to be abandoning wholesale. Fawning profiles and glamour cover shoots of the prime minister have proliferated since his election. Even so, Rolling Stone’s just-published entrant into the Trudeau-takes stakes is a real gem.

Here are some of the most cringeworthy lines, with a little context.

“His words are coherent and will not need to be run through Google Translate when he is done (except if you want to translate his French into English).”

Americans may be surprised to learn this, but with a few idiomatic and spelling differences Canadian English is largely the same as the version they speak south of the border. 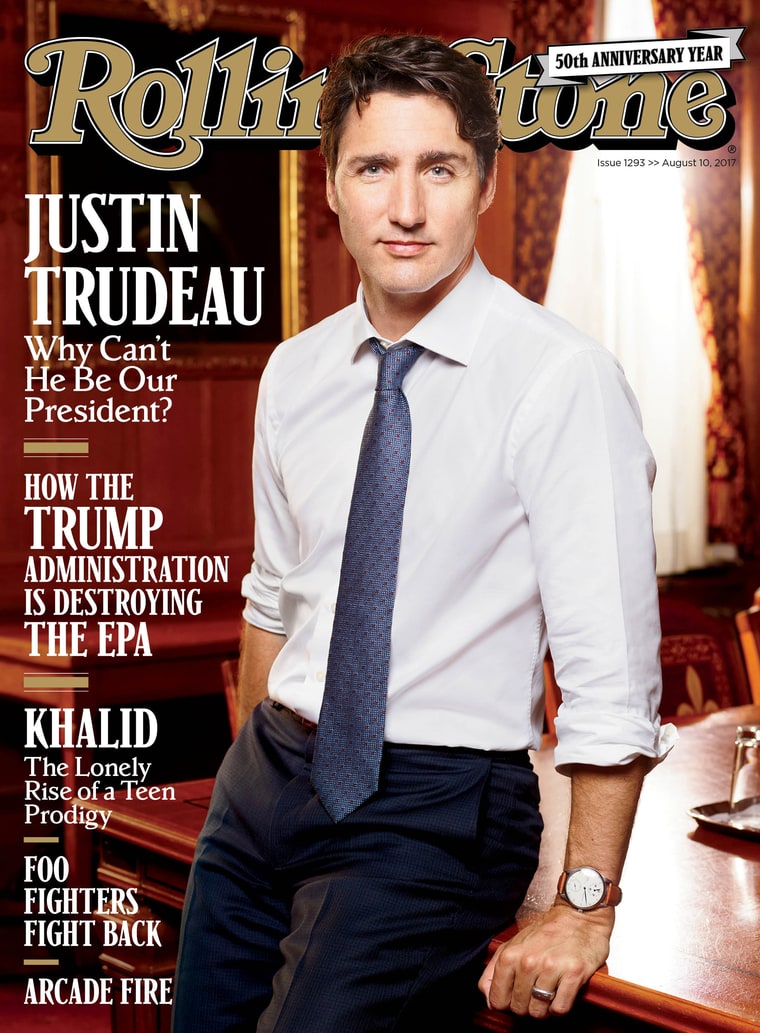 “His sleeves are pushed up, his tie blue, his shirt white, his socks festooned with moose.”
A reference to the prime minister’s foot sheaves is, of course, mandatory in any foreign press account of the man. The style rule dates back at least as far as 2015.

“For Trudeau, listening is seducing.”

“Leaving a House of Parliament room filled with portraits of French kings—where I heard him sing an off-key verse from Dylan’s “Like a Rolling Stone”—Trudeau points out a portrait of Louis XIV. ‘He was the original believer in ‘sunny ways,’ ’ Trudeau tells me. He chuckles. (Louis XIV was known as the Sun King. I got the joke after I looked it up.)”

Look, myopia is a core part of the American stereotype. But Louis XIV’s sobriquet is on, like, the top-10 list of most widely-known leader nicknames, right up there with George “Dubya” Bush. (The Sun King was also the ultimate absolute monarch, and his troops did some truly unsavoury things across the various wars he waged, so Trudeau’s joke might need some reworking).

“The Canadians will hate this, but at times Trudeau and his young staff give off the aura of a well-meaning Netflix adaptation about a young, idealistic Canadian prime minister.”

“Pierre [Trudeau] famously did a seemingly spontaneous pirouette behind the queen in 1977 at Buckingham Palace, but even that was planned in advance—a signal of Canadian disdain for Brit pomp.”

Staged spontaneity appears to run in the family. To his credit, the writer does acknowledge earlier in the piece that many of the prime minister’s random encounters with everyday folks seem to happen conveniently close to his official photographer.

” ‘You have to wait for them to open it,’ says Trudeau, pointing to his Royal Canadian Mountain Police detail. He grins a bit. ‘It took me six months to figure that out.’ “

Fact: Yukon’s Mount Logan is the highest mountain peak in Canada, with an elevation of 5,956 metres. Fact: In Canada, we typically measure height in metres, not feet. Fact: Even when they’re not on horses, RCMP stands for the Royal Canadian Mounted Police.

“He did not make a political move until the announcement that he was running for Parliament, in 2007.”

“It feels like I’ve wandered into an ad hoc third-grade plenary session of the United Nations. The principal told me later that the school of 900 featured more than 20 languages and children from 35 countries.”

Ah yes, the obligatory counting of passport varieties among the parents of the assembled students.

“He gives the kids his old schoolteacher look. ‘We figured out how to make this a source of strength, a source of creativity, a source of resilience for our communities.’ “

Yup, yup, “resilience” is definitely a word an elementary school teacher would drop in normal conversation with his students.