The Biden-Trudeau talk: build back whatever

Paul Wells: There was supposed to be a renewed Canada-U.S. relationship. The latest phone call between Biden and Trudeau suggests it is not going well. 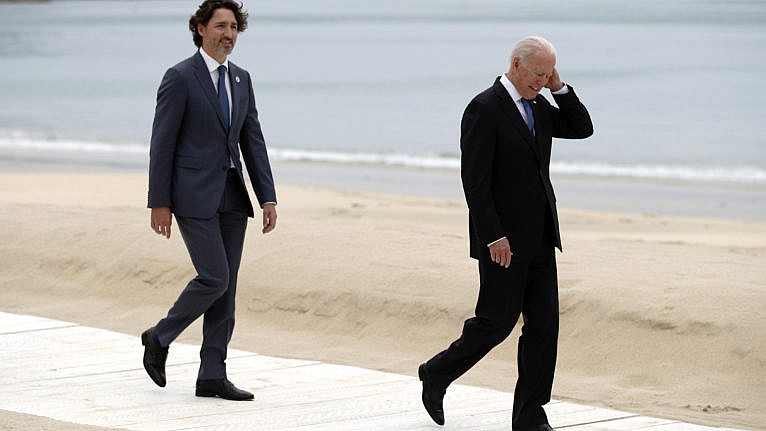 Biden and Trudeau walk on the boardwalk during arrivals for the G7 meeting at the Carbis Bay Hotel in Cornwall, England on June 11, 2021 (Phil Noble/AP)

I’m going to cheerfully assume it’s not at all a bad sign that the President of the United States and the Prime Minister of Canada don’t even agree on why they spoke by phone on Monday.

The readout from the Prime Minister’s Office landed first in Ottawa reporters’ inboxes. “Today, Prime Minister Justin Trudeau spoke with the President of the United States of America, Joe Biden,” it begins. “The Prime Minister and President discussed the importance of physical and human infrastructure investments being made to build back better from the COVID-19 pandemic and address its disproportionate impact on women, including by prioritizing supports for child care and education.”

The White House’s account of the chat came soon after. “President Joseph R. Biden, Jr. spoke today with Justin Trudeau, Prime Minister of Canada to thank him for the gift of Montreal smoked meats sent in congratulations for the Tampa Bay Lightning’s victory over the Montreal Canadiens for the Stanley Cup trophy.”

Perhaps they had a bad connection? “Justin! I just got the—what the hell is this stuff?—the brisket, I guess.”

“I agree, Joe. A fair recovery will be hard, but we have to risk it!”

There follows a period of relative alignment between the two descriptions of what was, after all, the same conversation. PMO: The two leaders “looked forward to working closely together for the benefit of people and jobs on both sides of the border.”

White House: Same, pretty much. Biden and Trudeau “discussed bilateral economic cooperation and their shared commitment to strengthening the resilience and competitiveness of the U.S. and Canadian economies.”

The Canadian account is, in a departure from the norm, more detailed than the American. Trudeau’s staff say he “highlighted the significant alignment between labour and environmental standards in both countries and the benefits to each country of open government procurement.” Biden makes no mention of such a thing. Trudeau says he “highlighted the importance of Line 5 for Canada’s energy security and reiterated Canada’s support for a negotiated settlement between Enbridge and the State of Michigan.” Biden says nothing about this, although the Canadian account insists both Biden and Trudeau “agreed to continue to monitor developments closely.” What would monitoring developments closely entail, anyway? A Google News alert?

The two accounts briefly agree again. Biden and Trudeau discussed the continued detention of Michael Spavor and Michael Kovrig by the Chinese regime. They both want the Michaels freed. From there, it’s more lonely unilateral Canadian declarations of bilateral cooperation: wildfires, November’s COP26 climate summit in Glasgow, “continued close collaboration” in managing the shared land border. On all of these matters, the White House keeps shtum. Perhaps the president was already tucking into his “smoked meats” and didn’t debrief his staff in any detail. The Ottawa readout ends with Trudeau ribbing the President about Canada’s Olympic women’s soccer victory over the Americans, although again, apparently Biden didn’t hear or care to repeat it.

Today’s close reading of two terse communiqués has been brought to you by the letters “P,” “M” and “O,” and by this corner’s continued amazement at the arid news desert surrounding what was, after all, supposed to be a renewed Canada-U.S. relationship.

My roadmap for this renewed Canada-U.S. relationship is the 40-point Roadmap for a Renewed Canada-U.S. Relationship, which Biden and Trudeau made public on Feb. 23 during their distanced online summit a month after Biden’s inauguration. That was five months ago. Given that Trudeau’s account of their latest conversation (and only Trudeau’s) says the two look forward to “working closely together,” the Roadmap’s progress is a good measure of how closely they’ve worked together so far.

Progress has been limited.

The Roadmap twice mentions “supply chain security,” which is the notion that goods can be built in instalments across the border without facing assorted trade-limiting barriers. But last week Canadian concerns about “buy American” provisions in Biden’s huge new infrastructure bill were still running high.

The roadmap says Biden and Trudeau “directed their Ministers of Foreign Affairs and National Defence and Secretaries of State and Defense to meet in a 2+2 Ministerial format,” a goal Marc Garneau, Canada’s foreign minister, reiterated after Zoom-calling with his opposite number, Anthony Blinken, three days after the Biden-Trudeau summit. A 2+2 ministerial did happen during the Trump administration but hasn’t taken place again since the Trudeau-Biden roadmap.

The roadmap called for the “Cross-Border Crime Forum” to be re-established, and the two countries’ attorneys general reiterated the goal when they spoke in April. Unfortunately the Government of Canada website dedicated to this organization hasn’t been updated since 2018.

The roadmap called for “an expanded U.S.-Canada Arctic Dialogue.” Neither side has made any announcement about such a thing since. Garneau’s account of a chat he had with Blinken in May mentions the need for such an expanded dialogue; Blinken’s—stop me if you’ve heard this one before—doesn’t.

It’s not as though there’s been no joint work. The roadmap calls for strengthening the U.S.-Canada Action Plan on Opioids, “recognizing the rise in drug use and overdoses in both of our countries.” Officials from both countries met in May to advance that goal. Natural Resources Minister Seamus O’Regan and his U.S. counterpart, Energy Secretary Jennifer Granholm, ticked off significant boxes on the roadmap’s to-do list with this June Memorandum of Understanding that at least mentions further work on cybersecurity in the energy sector and ensuring a secure continental supply of critical minerals—the often-rare substances without which modern electronics can’t be manufactured.

But the roadmap still leaves a hefty inbox to work through. A revived North American Leaders’ Summit—the so-called Three Amigos summits that began with Paul Martin, George W. Bush and Vicente Fox in Waco in 2005 and ended, so far, with Trudeau, Barack Obama and Enrico Peña Nieto in Toronto in 2016? No news yet.

Half a year into the Biden presidency, we’re left with the impression of cordial relations across the border, not more. I’m given to understand the Americans are frustrated by this. The Biden administration is plainly doing whatever the heck it wants on supply chains and Line 5, but it doesn’t take a friendly government to the north for granted. Its fondest wish is that Canada and the U.S. might work together on shared priorities in the rest of the world—that these occasional top-level phone chats over hockey bets might become more than a list of (apparently almost always uniquely Canadian) requests for exemptions from assorted bilateral irritants. What would excite Biden tremendously, in other words, is some burden-sharing.

U.S. authorities think Canada might be coaxed into taking a particular interest in stabilizing Haiti; in strengthening democracy’s hand in Cuba; in offering a model for African development that would be an alternative to China’s efforts; and at least, if Canada won’t bite on any of the other projects, on a robust and imaginative effort to modernize NORAD, the 63-year-old continental defence pact that stands at the heart of both countries’ national security doctrines.

Soviet nuclear missiles, the modish threat in 1958, have been replaced by a Pandora’s box of threats small and large, well canvassed in this article. But while NORAD modernization made it into the February roadmap, the Trudeau government is plainly skittish about discussing it, because it touches on taboo topics like ballistic missile defence (“Bush’s Star Wars”), 21st-century jet fighter capability (see assorted Canadian governments’ procurement horrors passim ad infinitum), and what for the Prime Minister is the eternally vexing question of Canada’s attitude toward China.

How skittish? Here’s a memo on NORAD modernization on the defence department’s website. Have a look. No, really, have a look.

Hard things are hard, as people used to say in Trudeau’s PMO, although I always thought that meant hard things require the kind of effort that you put into a task when you take it seriously. Perhaps, hard things being hard, it’s easier just to look around for easy things. As Joe Biden just demonstrated with a huge bipartisan infrastructure deal in Congress, he’ll talk to anyone if it’ll advance his agenda. The conspicuously chatty Canadian account of his latest conversation with Trudeau makes no mention of any of the agenda items I’m told would really catch Biden’s attention. When your neighbour keeps calling asking for favours, courtesy demands that you take the call, at least every once in a while. Calling that kind of strained and patient indulgence a renewed relationship, however, is a stretch.