The blackface photos jolted voters, but maybe only temporarily

In a new poll, Ekos finds the Liberals at first lost a lot of votes, then started to gradually gain them back 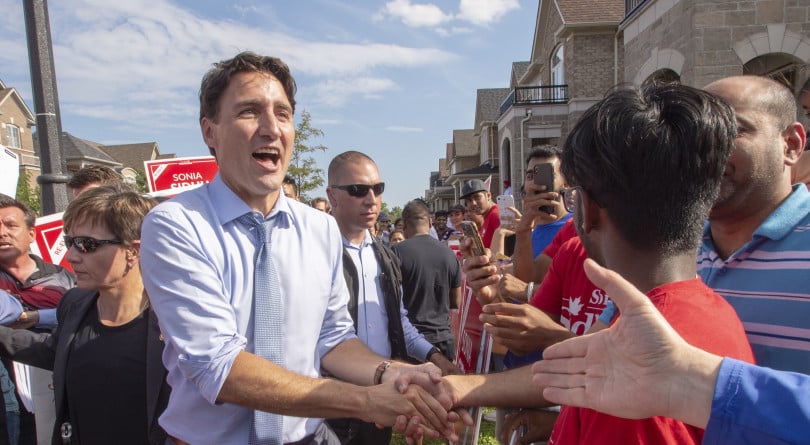 After news broke on the evening of Sept. 18 that Justin Trudeau had worn brownface to dress up as Aladdin back in 2001, the polling firm EKOS Research says the public opinion backlash against the Liberals was swift and severe—but possibly short-lived.

In polling conducted after the photo of Trudeau surfaced, veteran pollster Frank Graves says his Ottawa-based firm measured a massive 10-percentage-point swing in voting intentions over about the first two and half days—enough to obliterate what Ekos previously measured as a modest Liberal lead over the Conservatives, briefly handing the Tories a gaping seven-point advantage.

However, Graves said that later on in the same polling period, the response seemed to grow less emphatic. By the end of polling over Sept. 18-22, EKOS pegged Conservative support at 35.3 per cent, just ahead of the Liberals at 32 per cent, with the NDP at 10.1 per cent and the Green party at 10.3 per cent.

He described what the polling found at first as a “visceral shock” over the images of Trudeau as 29-year-old schoolteacher in Vancouver, wearing heavy brown makeup and a costume turban to an Arabian Nights-themed fundraising party. After that photo was published by Time, another photo of Trudeau wearing blackface makeup for a high-school variety show, and again in a video from “costume day” at a summer job he had at a whitewater rafting company when he was in his early 20s, also came to light.

“An initially profound impact of this incident on Liberal fortunes appears to be rapidly receding,” EKOS said in a news release. “It shows that there are large pockets of turbulence in the voter landscape, and that the electorate seem to be showing some receptivity to Justin Trudeau’s apology and recognition that there are many other issues of importance to them.”

The firm asked respondents questions about the blackface photos, using a polling method that lets people punch answers into the keypad of their phone, instead of talking to an operator. Overall, 51 per cent said they didn’t think Trudeau darkening his face and wearing a turban was serious, while 28 per cent said it was “serious” and 20 per cent “somewhat serious.” About a quarter of respondents said the incident will impact how they vote, with the other three-quarters saying it wouldn’t influence their decision on Oct. 21.

Ekos surveyed a random sample of 1,272 adults and said the margin of error is plus or minus 2.8 percentage points, 19 times out of 20. It cautioned that smaller sample sizes are smaller for specific regions or segments of the population. Still, those findings suggest significant province-to-province variations—from a low of 11 per cent in Quebec who say the incident will impact how they vote, to about a quarter of Ontario and B.C. voters, and over a third of voters in the Prairie provinces.