The easiest event to cancel: Trudeau and the premiers

Paul Wells: In a week like this one, here's something Ottawa can live without—a pointless gathering with an impossible agenda 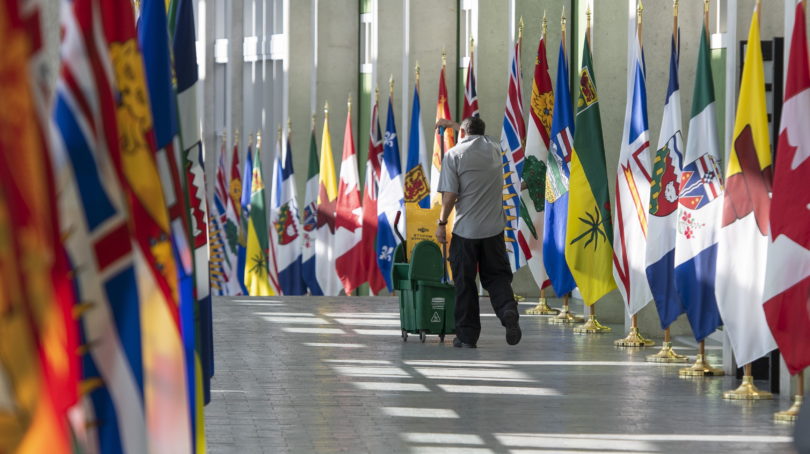 A custodian wheels a mop down the flag lined hallway at the John G. Diefenbaker Building, where Trudeau was set to attend the First Ministers' Meeting on March 12, 2020 (CP/Justin Tang)

This week’s question is: How do governments govern in a world where the monkeys are rioting in Thailand and the Iranian burial pits are visible from space?

To some extent you don’t. I’m writing this on Thursday, I feel I should emphasize, because so far Thursday is already eight times as weird as Monday was, and I have a hard time imagining the weekend. Thursday’s highlights have included the cancellation of the Junos, the Manning Networking Conference and the suspension of the NHL season. Justin Trudeau and Jagmeet Singh are working from home: Singh feels under the weather in the ordinary way we all normally power right through; Sophie Trudeau is awaiting results of her COVID-19 test. And since I sat down to write this, news arrived and was then contradicted about a coronavirus diagnosis for Brazil’s Jair Bolsonaro. If you read this in a few days you’ll marvel at the innocent time when this all seemed a big deal.

Here in the nation’s capital, it had already been feeling like One Damned Thing After Another Year since January, and this is one festival it seems nobody can call off. The Prime Minister kicked off Wednesday with a news conference at the National Press Theatre, a precinct with which he is becoming wearily familiar. Twice in January he’d been there to talk about an airliner shot down over Iran. In February the topic was Indigenous-inspired blockades protesting the Coastal GasLink project. In March the news is more biblical: the plague of pestilence upon the land. Lately I find I’m not looking forward to April.

Tallying results so far for the year, it must be said the Prime Minister has some good stories to tell. Not about Ukraine International Airlines Flight 752, it must be said. François-Philippe Champagne told reporters at the beginning of the week nothing new has happened and Iran is still not providing the black box that contains data about the flight’s final moments. “I think the world agrees it’s unacceptable,” he said. “It’s undermining international law.” But Iran remains impervious to the world’s opinion and the Canadian government’s entreaties.

The blockades, on the other hand, have been lifted, later than everyone would have preferred, but without serious violence. Except for Josée Legault in the Journal de Montréal, not a lot of pundits have paused to acknowledge this. It’s hardly the end of the story. But it’s encouraging progress and Trudeau gets some of the credit. Awkward at moments, correct on the direction.

Then there’s COVID-19. The infection has spread more slowly in Canada than in many countries. Spain’s caseload increased 26-fold in 10 days. Of course it’s still a dangerous time and everyone’s afraid of jinxing things. For the reassuring news so far, credit must be widely shared: with Chief Public Health Officer Theresa Tam, Health Minister Patty Hajdu, provincial governments, city halls, and assorted blessings of geography, climate and Canadians’ tendency to follow good advice without complaint.

The Prime Minister’s news conference was a bit scattershot. He announced $1 billion for this and that, to bolster supplies, speed research and ensure the jittery job market doesn’t leave people in the lurch. Other countries are already announcing large fiscal stimulus packages on the scale of tens of billions, which Trudeau wasn’t doing, at least yet.

It’s tricky: in the old days central banks could cut interest rates, but those are already near rock bottom. In the old days governments could run deficits, but this one already did when it shouldn’t. “Make hay while the sun shines” is the kind of folksy advice that has always harshed the Trudeau crew’s buzz. Scott Brison used to warn this government about spending. “He sounds like the teacher with the trombone voice in Peanuts cartoons,” a staffer for another minister told me then, greatly amused. Hilarious. Brison’s gone away now. He who laughs last.

Last week a provincial source sent me a draft agenda for Trudeau’s meeting with the premiers. It seemed surreal. The schedule for today was simple: Thirty minutes between the PM and Indigeneous leaders, then two hours with the premiers joining the discussion.

Friday was something else. Discussion on coronavirus. Discussion on “disruption to Canada’s rail service.” Then a discussion on “economic competitiveness and clean growth, including Canada-US relations and key priorities of getting resources to market, ensuring regulatory certainty in environmental assessment, strengthening internal trade and the diversification of international trade.” Then a separate discussion on “climate change and energy,” then one on infrastructure.

That’s right. The plan was to cover all of that terrain between 9 and 12:45, before moving on to northern priorities, health care and the fiscal stabilization program. That last is a longstanding program designed to protect provinces against serious drops in revenue. Alberta, Saskatchewan and Newfoundland and Labrador have wondered why the program has fallen largely into disuse. For obvious reasons, this is the most delicate part of the meeting. It was given half an hour at the end of the meeting.

On Tuesday, with tension and economic uncertainty mounting, I contacted officials in two provinces and said, well, I assume that draft agenda is out the window. Not at all, they said.

This draft agenda will form the basis for what one assumes will be surreal conversations via Skype or Facetime this evening and tomorrow. Greater dangers await and every participant will have more pressing concerns to return to. For many those concerns start at home with loved ones.

When the world calms down, Ottawa wonks can celebrate by considering the strange turn federal-provincial relations have taken. Trudeau’s office was careful to note this was—well, would have been—his sixth meeting with all premiers. The contrast with Stephen Harper’s government is striking and intended. Harper preferred not to meet the premiers as a group, though he made occasional exceptions. Trudeau likes to meet them.

But he doesn’t set the bar high. Except in 2016, when a bunch of friendly premiers now departed—Rachel Notley, Kathleen Wynne, Philippe Couillard—signed a “pan-Canadian framework” that laid the foundation for today’s carbon taxes and rebates in several provinces, the meetings are not designed to reach agreement on anything specific.

This is a big change. Remember when first ministers’ meetings were full of drama? It’s not because the old guys, Pearson and Pierre Trudeau and Mulroney and Chrétien and Martin, lacked charm. It’s because they were trying to come to unanimous agreement on specific wording of texts that would decide either constitutional change or the prompt allocation of billions of tax dollars. It’s why premiers used to walk out sometimes: because important things were being decided and tantrums were their only way to steer the boat.

Now nothing is decided. These meetings have become an extension of the Prime Minister’s Twitter feed. He tells people what he’s doing; they are free to react; then they leave and he does some more of it. Nobody walks out; why be rude? Nobody’s thrilled; why were they ever there?

There will be bigger trouble for us all for a long time to come. But if the wise thing to do this month is to cancel non-essential travel, this meeting was well worth cancelling.