A leading academic expert on blackface in Canada says Trudeau's lapse wasn't unusual for the time, but this campaign disaster is anything but ordinary 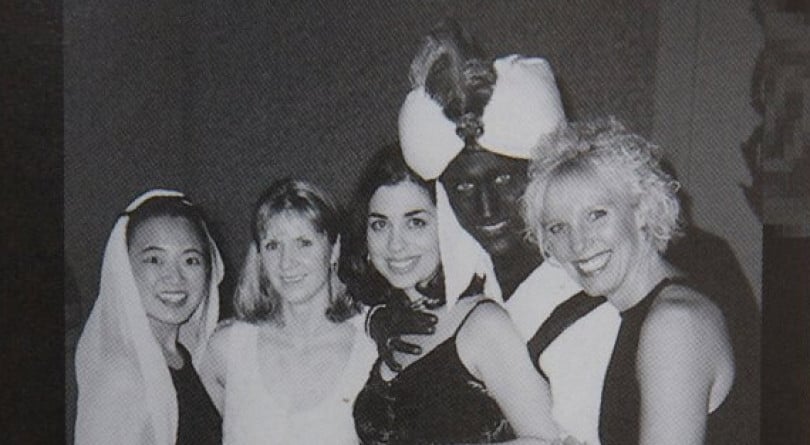 When Cheryl Thompson, a professor at Ryerson University in Toronto, and author of Beauty in a Box: Detangling the Roots of Canada’s Black Beauty Culture, heard the news that Justin Trudeau had covered his face in heavy brown makeup to dress up as Aladdin for an Arabian Nights-themed party in 2001, she didn’t think first of her extensive academic research into the history of blackface in Canada.

Instead, Thompson’s memory flew back to one Halloween when she was a high school student in the Toronto suburb of Scarborough in the mid-1990s, and a teacher showed up for the school day in a blackface costume. “Nobody called the news. There was no brouhaha,” she said in an interview. “Different times. I remember thinking it was crazy, but I didn’t think it was racist.”

She does now, of course. While researching Canada’s black beauty culture at McGill University, Thompson discovered that blackface pops up frequently in Canadian archives going back to the mid-19th century. Not just a feature of the entertainment business, blackface existed in sports and social clubs, summer camps and company settings—and high schools.

Trudeau was a teacher when a photograph of him in the costume—discovered and reported on today by Time magazine—was snapped in the spring of 2001. He was 29 years old, teaching at West Point Grey Academy, a Vancouver private school, and the photo was printed in the school’s yearbook. He’s wearing a theatrical turban, too, gathered close with four happy-looking young women in party dresses.

Trudeau repeatedly apologized in a news conference held this evening on his campaign plane. “I didn’t consider it a racist action at the time, but now we know better,” he said. “This was something that was unacceptable, and, yes, racist.”

Thompson watched that news conference on TV and credited Trudeau for accepting without equivocation that what he had done was racist, rather than deflecting the word that many public figures least want pinned to their actions. “I’m satisfied with that at the first level,” she said.

She said blackface was not nearly so widely denounced in 2001 as it is now. “A lot people of a certain age, if they didn’t do it, they were at a party where somebody did it,” she said. “Think of those four women in the picture—they’re smiling. They don’t seem offended.”

Blackface has a long, troubling history in Canada, but Thompson has written that it is “rarely framed as a ‘Canadian’ pastime,” in contrast to the wider acknowledgement of how deeply rooted it is in American culture. In Canada, there’s a tendency, she says, to minimize blackface as “a few students and/or teachers making ‘innocent’ mistakes.”

Still, there seemed little chance that this fall’s Liberal campaign will be able to avoid serious backlash over the Trudeau photo. It undermines his carefully cultivated brand as a politician who champions diversity. His first campaign as Liberal leader in 2015 was credited with helping boost turnout significantly among visible-minority voters. For example, Statistics Canada said turnout among recent immigrants from Africa soared 22 per centage points in 2015 over the 2011 election, while voting rates among recent immigrants from West Central Asia and the Middle East jumped by 22 percentage points.

How much damage it causes the party on the path to the Oct. 21 vote, though, remains to be seen. It seems likely to make the Liberals think twice about continuing with their tactic of exposing evidence of past intolerance or insensitivity from Conservative candidates. Communications consultant Jason Lietaer, a veteran Conservative strategist, said an incident like this one would derail any federal Tory leader’s campaign. “If this was Andrew Scheer or Stephen Harper, there’s no way they would make it to the finish line, or, if they did, have a chance of winning,” Lietaer said in an interview.

There would be intense pressure from inside the Conservative party to step down, he said, along with demands for a resignation from the opposition parties and pundits. Yet he didn’t recommend that Scheer go fully on the offensive. “Make a statement. Let Canadians judge for themselves,” Lietaer said, adding that the best strategy when your opponent is stumbling badly is to stand back and let them keep falling.

Later in the evening, however, Scheer reacted in the strongest terms. “Wearing brownface is an act of open mockery and racism. It was just as racist in 2001 as it is in 2019,” Scheer said, describing Trudeau as having showing himself to be a politician with “a complete lack of judgement and integrity, and someone who is not fit to govern this country.”

Trudeau said he had already talked by phone with some of his political colleagues who might be personally affronted by the picture. He didn’t name them, but his cabinet includes, for example, Defence Minister Harjit Sajjan and Innovation Minister Navdeep Bain, both turban-wearing Sikhs. Thompson said she hopes they don’t let him off easily. “To these people,” Thompson said, “they should be confronting him.”