The fate of Trudeau's carbon tax is in voters' hands now

Oct. 24: Ottawa reveals how it plans to get its way in fight with provinces over the carbon tax, and the odds don't look good for a balanced budget any time soon 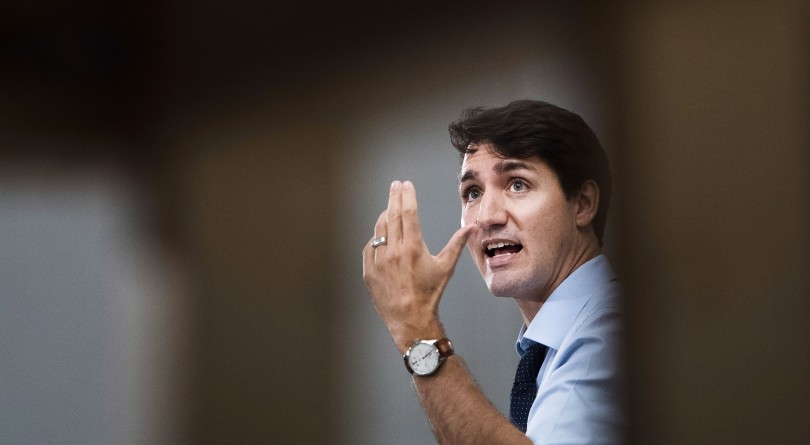 Prime Minister Justin Trudeau speaks to the media and students at Humber College regarding his government's new federally-imposed carbon tax in Toronto on Tuesday, October 23, 2018. THE CANADIAN PRESS/Nathan Denette

So now we know how the Trudeau government plans to deal with those scofflaws in New Brunswick, Ontario, Manitoba and Saskatchewan, the four provinces (so far) that have refused to apply an Ottawa-approved price on carbon. (CBC News)

Starting next April Ottawa will impose a tax on fossil fuels like gasoline, oil, natural gas and propane in the four provinces, equal to an increase of 4.42 cents for a litre of gasoline in the first year, rising to 11.05 cents by 2022. In turn, the government said it will return 90 per cent of the proceeds collected from the carbon tax in those provinces back to households by way of annual rebates. And here’s the key point government officials hammered away at over and over on Tuesday: most households will get slightly more back in rebates than they paid in carbon taxes in the first place.

Now, writes Paul Wells, it’s up to voters to decide which argument they buy about the carbon tax—that it’s an economy-destroying attack on Canadian households, or an ambitious and widely-supported effort to tackle climate change that will have little impact on peoples’ finances:

There will, of course, be cases where a given driver uses way more than the average amount of gas. One suspects we’ll be hearing from those people, both directly and through the mouths of Conservative MPs. The Conservatives seemed eager to join this battle, using words like “ram” and “massive” and “phoney” (misspelled, but still) and “measly.” The Liberals spoke in hushed tones about historic obligations.

We now have a year, almost to the day, before the votes of Canadians will settle the question of who has made the better case. I think more of the facts, as well as most of the political difficulty, are on the Liberals’ side. But each voter will decide. (Maclean’s)

Wait, what’s that you (and Saskatchewan Premier Scott Moe) say? Trudeau’s just trying to buy Canadians’ votes with their own money you say? Perish the thought. (National Post, iPolitics)

The Liberals might have hoped that securing a new trade agreement with the U.S. and Mexico would score them points with voters, but Canadians say they aren’t enthused by the results. In a new survey from the Angus Reid Institute, more Canadians were disappointed by the USMCA deal than were pleased by the outcome. (Maclean’s)

We’re not sure if Parliamentary Budget Officer Yves Giroux is a betting man, but we now know the odds he’s putting on Ottawa balancing its books in the years ahead. In a new report the PBO said there’s only a 10 per cent chance of the federal government erasing the red ink by 2021-22, and only a modestly higher 30 per cent chance we see a balanced budget in 2023-24. Instead, expect a $21.3 billion deficit next year that only dips below double-digit level six years from now. (Canadian Press)

So when it is revealed, as in last week’s annual financial report, that the Liberals, handed a $20-billion revenue windfall in the last fiscal year, spent it all — leaving the deficit unchanged from the previous year — maybe we should all chill out. The federal government could run $19-billion deficits forever, and the debt-to-GDP ratio would continue to fall. Maybe federal deficits are yesterday’s issue.

Or maybe not. If it’s too easy to compare today’s deficits with those of the past, it’s also too easy to forget how quickly those past deficits spiralled out of control. It took just four years in the late 1970s for the deficit to go from 1.4 per cent of GDP to more than five per cent, even with economic growth averaging 3.6 per cent per year. The recession of the early 1980s may have been the torpedo that sank federal finances. But the ship was already low in the water. (National Post)

Is John Tory the mayor Toronto needs, or the one it deserves? Now that Tory has secured a second term as mayor of Canada’s largest city, John Lorinc examines whether the mayor’s cultivated blandness will help or hinder him in his dealings with Premier Doug Ford. Tory certainly seems out of step with the city he oversees, Lorinc writes:

Every so often, cities rouse themselves to elect mayors who somehow embody something essential about a particular place and time. In the 1960s, Montreal’s Jean Drapeau evoked the hard-driving, nation-building aspirations of Quebec’s Quiet Revolution. When he swept to power in 2010, Calgary’s Naheed Nenshi projected the out-there panache of a city that had become far more cosmopolitan than eastern Canadians thought possible. And even more recently, Vancouver’s Gregor Robertson refracted the kind of cool urbanism that had accrued to a vertical city that was more than ready to shed its parochial, frontier habits.

Tory, by contrast, reflects almost nothing about 21st-century Toronto. Unlike the city he governs, he is neither self-involved, brash nor publicly arrogant. In a region flush with tech-industry cash, Tory’s wealth comes from the old and dull corners of law. White, male, straight and middle-aged, he doesn’t have so much as a suggestion of ethno-cultural intersectionality, and yet he serves as chief magistrate in a city where more than half of all residents were born abroad and many more grew up with immigrant parents. And the achievements of his first term fail to live up to a city of enormous ambition. (Maclean’s)