The feisty first week of the 42nd Parliament

Questions, complaints and combativeness as the 42nd Parliament gets to work 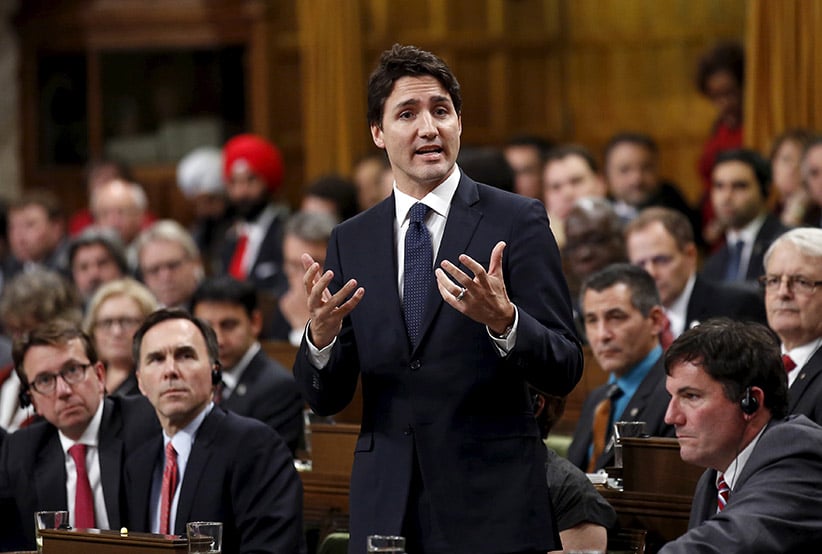 The ministers of the Trudeau cabinet have, for the most part, refrained so far from merely standing and reading from pieces of paper when challenged during question period. This has so far had the effect of making the proceedings seem more vaguely human.

Which is perhaps to say that the possibility of someone saying something unfortunate has markedly increased.

“Mr. Speaker, we are into sunny ways,” Immigration Minister John McCallum said on Thursday, in response to a question his Conservative critic, Michelle Rempel. “I would suggest that my colleague look a little more cheerful.”

To his credit, McCallum then proceeded to actually answer Rempel’s question, but that hardly mattered by then. The Speaker warned members against being “provocative” and, afterwards, Rempel stood and lamented for the comment—alleging as well that the Prime Minister had laughed at her—which prompted McCallum to apologize. “Mr. Speaker,” he said, “my comment was intended in a light-hearted way to celebrate the arrival of the refugees this evening, but I understand it could have been taken in a number of ways.”

The Conservatives might’ve mocked the incident as the end of Trudeau’s “sunny ways,” but then that much had been declared three days earlier after Treasury Board president Scott Brison had answered criticism of the new government with complaints about the previous government.

“Mr. Speaker, I think it has been 25 minutes and the sunny ways are over,” interim Conservative leader Rona Ambrose reported on Monday morning. “Let the record show that at 11:26 a.m., the sunny ways were over.”

Yes, well, if you thought it was to be all sunshine and lollipops, you were always fated to be disappointed. But if you merely interested in change, there is still hope.

The government and official Opposition managed yesterday to go through the formality of reviewing the schedule for House business without haranguing each other, as had become the habit in the last Parliament.

The new Speaker is seeming to be of a different sort.

“Does the member for Peace River–Mackenzie have a problem?” Geoff Regan asked on Wednesday. “I am glad he does not.”

This is, it should be noted, not the name of an actual riding. (“What is the riding?” Regan next asked. “We will get it right.”) But here the Speaker was attempting to intervene to chide an alleged heckler, with a notable degree of sass—though the MP in question seemed to dispute Regan’s hearing. Regan has seemed eager to engage the House and, though early yet, this could make for a significant new influence on the House.

That House carries on many of the storylines of the last Parliament, but much of it is different—a new government, a new official Opposition, 197 new members—and thus all-the-more fascinating. If you are into this sort of thing it is a bit like Netflix has just uploaded a new season of your favourite show—a weird, sometimes tedious, but still basically fun show.

The official Opposition is well-stocked with potentially interesting voices of dissent—Ambrose, Rempel, Lisa Raitt and Scott Reid—and Tom Mulcair is still prominent and Trudeau’s ministers are a mix of comfortable veterans (McCallum, Ralph Goodale) and eager rookies (Bill Morneau and Maryam Monsef are the early front-runners to be most brutally tested).  And there is, so far, that slightly new tone to the government, or at least that distinct lack of reading.

Which is not to say that the responses are free of platitudes or strictly fact-based. Rempel, the Conservative critic, has adopted the old trick of asking precise questions that request very specific information. McCallum has not always been equal to the task. “Mr. Speaker, many of these new permanent residents to Canada will expect answers from their immigration minister,” Rempel chided him on Thursday. Not unnecessarily impugning the questioner is good, but doing one’s utmost to deal with the question at hand is even better. Not answering is the sort of thing that can grate.

The Prime Minister has shown a willingness for the contest that might’ve been forgotten about amid the sunshiny spirit of the last two months. “Mr. Speaker, it is wonderful to see that the member opposite has suddenly discovered that consulting Canadians is appropriate,” he chided Ambrose on Wednesday, “because she certainly did not do that during the so-called Fair Elections Act.” Later, he laughed and held up a hand in the shape of a zero after his natural resources minister mocked the Conservative government’s record on pipelines. Sometimes when Trudeau leans back in his chair in the House he can seem to project something of a certain attitude. And it is perhaps useful to remember who his father was (“fuddle-duddle” and all that).

Of course, every government receives questions it doesn’t want to answer. And any government can justify being combative at times. But then this government carries the promise of some higher standard, elected as much for its purported values as its promised policies. Its rivals will be quick to quip about sunny ways. Another new government will compete with the idea of what it could or should be.