Paul Wells: Scheer had the hardest night, Singh was a revelation, and Trudeau was let off easy. But none of them could match the eloquent Blanchet, who will bear watching. 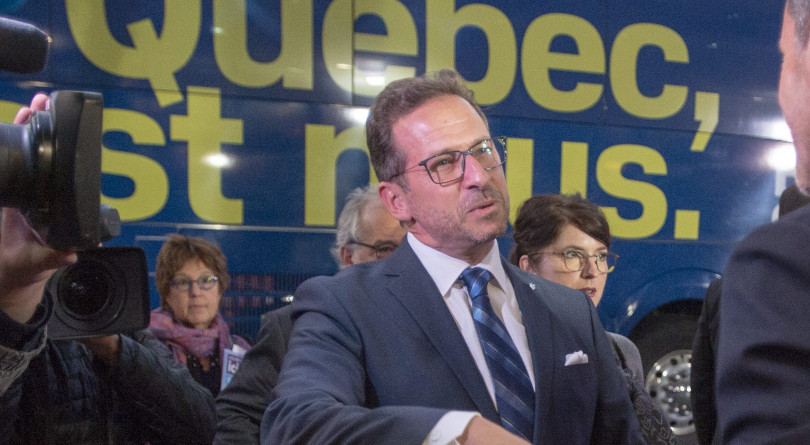 So, karma’s still fun. “Here we see that there are three of us who are aligned with Quebecers’ convictions,” Justin Trudeau said sorrowfully a few minutes into Wednesday’s French-language Face à Face TVA leaders’ debate. “And there’s a fourth who isn’t.”

The question at hand was reproductive choice. Liberal leader Trudeau, like Bloc leader Yves-François Blanchet and NDP leader Jagmeet Singh, had been quick to proclaim his whole-hearted support for a woman’s right to choose. Scheer, a practicing Catholic who won the Conservative leadership partly by collecting second-choice support of social conservatives, won’t do the same. All he could do was note that the law regarding abortion hadn’t changed when Stephen Harper was prime minister and promise it won’t change if Scheer becomes PM. Trudeau leapt at the chance to draw an evident distinction on values.

Next question: Bill 21, which makes it illegal for Quebecers who wear religious insignia to hold public-service jobs, even as teachers. Quite popular in Quebec. The premier, François Legault, has urged federal leaders to butt out of the matter. “I would hope it ends the debate,” the Bloc’s Blanchet said. Trudeau won’t make that assurance. More clearly than either Scheer or Singh, he insisted on keeping open the option of challenging the law in court at some future point.

READ MORE: The missing ingredient in this federal election

Here we saw three leaders aligned with Quebecers’ priorities and one who wasn’t, but this time the one was Trudeau. Life’s funny sometimes.

It was one of the few awkward moments in a pretty easy night for the Liberal leader. Trudeau is roasted in absentia every day by his opponents on the campaign trail. But here he was, finally showing up for a televised leaders’ debate (cough), and the other guys let him off quite easy. He was having a good French night—anglophones would be surprised to hear how often his approximate grammar grates on francophones’ ears, but to my ear that wasn’t a problem on this night. He was calm and low-key. And for the most part, the others talked right past him, each concentrating on making his own points rather than on scoring against the incumbent PM.

Scheer had the hardest night. His French is respectable but not agile. He was often defending a minority of one against the broad consensus of Trudeau, Blanchet and Singh—respectively leftish, modishly go-gauche and, well, Singh. He was hardly a sack of rubble at the end of the night, but in a generally respectful and low-key exchange, he was the one most frequently made uncomfortable by his counterparts.

Scheer did take a few chances to make his own points. Once when Trudeau was accusing him of being Stephen Harper redux, Scheer riposted. “On that point, I’m sure Quebecers missed Stephen Harper during your India trip,” he said. “You got elected in 2015, congratulations, but it’s 2019. Check your calendar.” And when everyone was piling on him for supporting the oil sands, widely seen as the easiest of easy targets in Quebec, he replied: “The most popular vehicle in Quebec is the F-150,” an immense Ford pickup truck. “Quebecers are going to keep needing gas.”

Singh was a revelation, even more clearly so than at the Maclean’s debate, where I thought he handled himself well. His French, while hardly perfect (“promouvoir la langue”—hand-wave—”Molière!”), was better than I’ve heard before from him. He has a devilish sense of humour that comes out now and then. I’ll be surprised if the NDP can get up out of the basement in Quebec polls at this point, but Singh’s point all along has been that if Quebecers will only listen to him, they’ll like what they hear. Now we will find out.

But none of the leaders matched Blanchet. He’s the fifth Bloc leader since 2015—amazingly, none of the others bothered to mention the chaos the party’s been through. He was a minor figure in Pauline Marois’s short-lived Parti Québécois provincial government, and before that a recording-industry executive. Trim beard, greying hipster mien. Eloquent, even professorial, tenting his fingertips as he made general points rather than specific attacks. Surely the calmest Bloc leader in the history of a party that was not invented to spread calm.

Quick with the shiv, though, a couple of times. Scheer tried the deal-closing argument of a man whose party has made gains and could just conceivably win this election, that he needs Quebec support and, besides, what’s the point of electing opposition MPs when you could influence a government? Blanchet saw his opening. “If being an MP who’s not in government is useless, you’ve been useless for four years,” he told Scheer, “and you may be again after Oct 21.”

Easily the most interesting exchange was on the opioid overdose crisis. Why not just decriminalize all drugs, moderator Pierre Bruneau asked. “Not right away,” Trudeau replied. It sounded like a Kinsley gaffe: the Liberal leader suggesting his blanket refusal to consider the idea might be softening.

Scheer heard it too. “‘Not right away.’ There’s your hidden agenda,” he said.

“We see the politics of fear you play, Mr. Scheer,” Trudeau replied. But Scheer was having none of it.

“When the government imposes a supervised injection site…the community, mothers and fathers, want to be heard,” he said. And Trudeau’s government has done “nothing for rehabilitation.”

On the substance of the matter, I side strongly with Trudeau, believe in fact he’s been too timid on opioids. But goodness knows there are a lot of people uncomfortable with supervised-injection sites. On this as on many questions, Scheer’s hope is that his opponents are right when they say he’s all alone on an issue. In a complex competitive environment, being alone against a consensus isn’t necessarily a bad thing.

I’ll be a little surprised if this debate moves polling numbers. But it’s impossible to get a bunch of leaders together without hearing interesting things. Blanchet in particular will bear watching as this endless, soul-destroying campaign finally enters the home stretch.