Paul Wells: In his criticism of the Liberals' plans, Pierre Poilievre goes too far. He is also not always wrong. 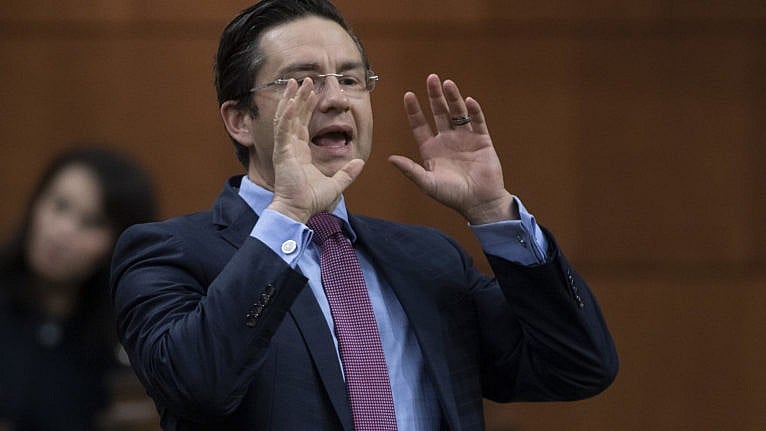 Poilievre rises during Question Period in the House of Commons on Oct. 19, 2020 (CP/Adrian Wyld)

I see Pierre Poilievre has been busy again. This is often a mixed blessing.

Over at the Conservative finance critic’s website there’s a petition you can sign if you want to help him STOP THE GREAT RESET. That’s because the Prime Minister said in September—here I’ll quote Justin Trudeau accurately, but using the punctuation Poilievre uses in his petition to add a bit of spice— “This pandemic has provided an OPPORTUNITY for a RESET. This is our CHANCE to accelerate our pre-pandemic efforts to REIMAGINE economic systems… .”

As a bonus, Trudeau said this at (or to, via Zoom video which you can watch here) a conference organized by the tentacular globalist organization known as the United Nations. That’s all Poilievre needs to mention “global elites” twice in the short text of his petition. The petition’s a hit, and it has provoked a fair amount of coverage. Here’s the Toronto Star citing academics who say Poilievre is playing to conspiracy theories, and here’s Le Devoir citing more academics who say the same thing — first about Maxime Bernier, leader of the Maxime Bernier Keeps Losing Party, the first politician to tweet about the Reset video, and then a few days later about Poilievre.

Both newspapers’ reports say two correct things that are worth pointing out. First, that the Prime Minister did indeed brag to other world leaders about seizing a massive global die-off as a chance to “reimagine economic systems.” Nor is Trudeau alone: There’s a Great Reset page on the website of the World Economic Forum, or as the Toronto Sun editors like to call it, “an annual meeting of global political and business elites in Davos, Switzerland, a luxurious ski resort.”

Second, my colleagues’ stories also note that this talk has provoked reaction reaching right out to the fringe of the political right, with stops at Max Bernier, Tucker Carlson, and the sort of loopy made-up social-media rants that wind up getting debunked on the Snopes website. (“I want to provide you some very important information,” this one begins. “I’m a committee member within the Liberal Party of Canada. I sit within several committee groups but the information I am providing is originating from the Strategic Planning committee.” It goes on to describe forced vaccinations and, in effect, concentration camps. The Snopes article contains helpful quotes from Trudeau’s PMO confirming that there are no such plans. Globalist cuck that I am, I believe their assurances on this.)

That’s why Trudeau said, when quizzed on Friday by reporters about all this, that “Conservative MPs” were “talking about conspiracy theories” and “misinformation.” Which led Poilievre and others to point out that it’s hard to call something a conspiracy theory when it uses quotes from the PM’s own speech.

There’s a tension here. On one hand, it’s absolutely true that Trudeau and many, many other members of, for lack of a better term, the global elite have spent altogether too much time this year salivating over the perceived opportunity presented by a ghastly global catastrophe. That’s been a theme of much of my own journalism this year, as I’ll remind you shortly.

On the other hand, I believe it’s also true that the Great Reset controversy is rocket-fuelled by the fears of people who are willing to stretch fact into hate-fuelled fantasy. By conspiracy theorists, in other words. Long before Poilievre, Max Bernier, Ezra Levant and Tucker Carlson got their hands on that Trudeau clip, YouTube commenters were using that UN speech to accuse Trudeau of “communism” and writing that he should “stand in jail next to Joe Biden.” For most of us, there’s quite a leap from Trudeau using shiny language as he nudges foreign aid budgets upward, to, say, believing that Trudeau and Bill Gates conspired with their Chinese pals to invent a plague and get rich forcing people into mass vaccination camps.

I think it’s a problem when political figures wink and nod at people who are at best confused, and at worst, worse. And I think winking and nodding are staples of Poilievre’s toolkit. It’s one reason he has a lot of detractors, as well as fans, within the Conservative Party itself.

I also think Trudeau and the Liberals have spent too much of 2020 believing a global crisis would somehow make their work easier, or more exciting, or more validating. And on the frequent occasions when they say so out loud, it comes out sounding bad.

I began writing about this in June, with a piece that swiped an unattributed quote from some Liberal talking to Le Devoir: “It’ll be a good time to be a progressive government. There are a lot of us who are dreaming big… I have more confidence than ever, because Justin Trudeau seems to really grasp the immensity of the moment.” That was nothing compared to a rather sweeping bit of empire-building Michael Sabia had indulged in the op-ed columns of the Globe, where he urged governments to “begin thinking now” about “a new generation of infrastructure” and “spending on education” and “retooling our health-care system.” I loved that last bit, still do: And let’s retool health care while we’re at it. “Remember Rahm Emanuel’s famous ‘You never want a serious crisis to go to waste,’ ” Sabia added, neglecting to add that Emanuel was mayor of Chicago, in many ways a serious crisis in the form of a city, and that he is not widely reckoned to have retooled it.

Anyway. Two weeks after that op-ed appeared, Sabia was appointed CEO of the Canada Infrastructure Bank with its $35 billion in taxpayer money. And then he spent the summer saying things like, “For the first time in living memory, so many of the standard operating procedures that are so often a straitjacket and a constraint on creativity are essentially gone.”

I don’t think you need to subscribe to any of the standard-issue phobias and conspiracy theories to wonder what that could possibly mean, and to be essentially certain that it cannot mean anything healthy for sound public administration.

And then Justin Trudeau fired his finance minister. Up and fired him. It was in all the newspapers. Maybe you heard about it. And in his first public remarks after he sent Bill Morneau packing, the Prime Minister of all the Canadians said, “We can choose to embrace bold new solutions to the challenges we face and refuse to be held back by old ways of thinking. As much as this pandemic is an unexpected challenge, it is also an unprecedented opportunity.”

That was in August. By mid-September, the polling numbers on this sort of talk were in. And they weren’t good. So now Liberals were telling the CBC there was “a sensitivity to being perceived to hijack the moment for a green recovery.” And the PM’s old counsellor Gerald Butts was offering public advice to his former colleagues: “To put it diplomatically, I think that in any crisis situation, people will repurpose their pet projects as urgent and necessary responses to the crisis at hand,” Butts said. “And it’s vitally important that, when people are feeling as anxious as they’re feeling right now, we start the solutions from where they are and build up from there. And not arrive in the middle of their anxiety with a pre-existing solution that was developed and determined before the crisis that’s arisen.”

The distance between Butts’ warning and Poilievre’s tweeting is—OK, it’s a pretty big distance. But it’s closer than those two gentlemen usually like to get. They were both using their own vocabularies to describe the same mismatch between the Trudeau government’s eyes and its stomach —between its appetite for a brave new world and what populations will accept.

Why had Trudeau not gotten the message by the end of September, when he still hoped to impress the UN with talk of a reset? I think he actually had. I think he replaced one finance minister with another who will turn out to be functionally identical. I know he delivered a Throne Speech that was thuddingly prosaic compared to its advance billing. There is an important distinction, by now well entrenched, between the government this Prime Minister likes to think he’s running and the one he’s actually running. The government in his head is more amazing by far than the one that occupies three-dimensional space. Which is how he was able to talk about “reimagining economic systems” on a day when, concretely, what he actually brought to the table was a development-assistance cheque worth one-tenth of one per cent of this year’s COVID-related federal spending.

Way up at the top of this post, nearly 1,500 words ago (sorry), I wrote that Pierre Poilievre is “often a mixed blessing.” I meant just that: he goes too far, he plays to the bleachers, and I believe that if he were, say, a U.S. Republican Senator, he would be encouraging Donald Trump’s assault on democracy, for the sake of the team, rather than discouraging it, for the sake of the Constitution. For that reason I hope he won’t be Canada’s finance minister. But neither is he always wrong. Just last summer Poilievre had this crazy notion that the government was spending millions to build Trudeau a secret mansion at Harrington Lake, and damned if that wasn’t mostly true.

So as I say, there’s a tension.