Politics Insider for Dec. 4: The newest Liberal bill shifts to reconciliation, federal officials outline their initial COVID-19 vaccine distribution plans and does Erin O'Toole have an opening in Quebec? 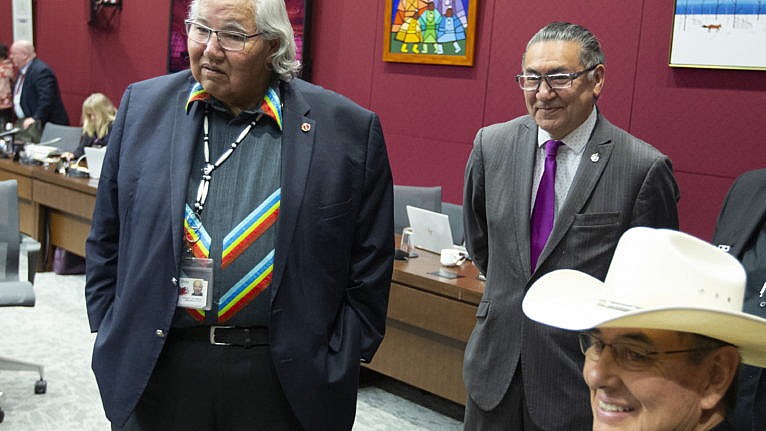 Senator Murray Sinclair, left, along with lawyer and former member of Parliament, Wilton Littlechild, right, and NDP MP Romeo Saganash get ready to appear before the Senate Committe on Aboriginal Peoples in Ottawa on Tuesday May 28, 2019. (Fred Chartrand/CP)

Four and a half years after former NDP MP Romeo Saganash tabled a private member’s bill that would force the federal government to officially endorse the United Nations Declaration on the Rights of Indigenous Peoples, Justice Minister David Lametti introduced a new bill that would do exactly that. Lametti recognized Saganash’s Bill C-262, and said that legislation served as “the floor” for all conversations that led to Bill C-15.

The new law would mandate that governments “take all measures necessary to ensure the laws of Canada are consistent with” UNDRIP, and develop an action plan and annual progress reports to that end. Assembly of First Nations National Chief Perry Bellegarde called the bill a “crucial tool for addressing systemic racism.” Sen. Murray Sinclair, the outgoing senator and former chair of the Truth and Reconciliation Commission, called C-15 a “deeply moving and encouraging step towards reconciliation.”

A monument to reconciliation: The day before the Liberals tabled their UNDRIP bill, they answered a written question on the order paper from Bloc Québécois MP Sylvie Bérubé on the status of a monument to honour residential school survivors. The response: the feds have “begun work,” but so far have committed no money to the project, picked no location, have tasked just o.5 “full-time equivalents” and held a single consultation workshop in October 2019.

A potential breakthrough? The Wall Street Journal reported yesterday that U.S. Justice Department officials are “discussing a deal” with Meng Wanzhou, the Huawei exec who was arrested by the RCMP in Vancouver almost exactly two years ago. The newspaper says if Meng were to admit wrongdoing, the Americans could grant her a “deferred prosecution agreement.” (Readers might remember DPAs as the controversial legal mechanism at the heart of the SNC-Lavalin Affair of 2019.) The case’s outcome could make a difference in the ongoing detention of Michael Kovrig and Michael Spavor.

As Manitobans struggle to reckon with the coronavirus, Premier Brian Pallister urged the province’s residents to stay home for the holidays. Pallister was visibly emotional as he hammered home a message that seemed unfathomable a year ago: “I’m the guy who’s stealing Christmas to keep you safe, because you need to do this now,” he said. “You don’t need to like me. I hope in the years to come you might respect me for having the guts to tell you the right thing.”

Yesterday, the Commons debated a Conservative motion tabled by party leader Erin O’Toole that demanded the Liberals publish their plan to vaccinate Canadians against COVID-19. The motion call for a breakdown of how and when each vaccine will get to Canada, how they’ll be stored and distributed, the rate of inoculations by month, and specific plans to protect priority groups like health-care workers, seniors, Indigenous people and the military.

While politicians debated that plan, the public servants who will implement it were talking to reporters. Maj.-Gen. Dany Fortin, the vice-president of logistics and operations at the Public Health Agency of Canada, said the first doses of the Pfizer vaccine could be delivered to various provincial deep-freeze storage facilities before the end of the year. He said a “dry run” on distribution has already been completed—with more in the coming days.

O’Toole likely spotted some good news in a new Angus Reid poll on federal voting intentions. The Tory leader’s overall approval ratings are in negative territory (36% favourable/42% unfavourable), but Bloc Québécois supporters appear to be warming to the Anglophone from Ontario. He’s still in the red—35 favourable and a minus-3 rating—but 27 per cent of Bloc voters were undecided on him.

The top bureaucrat at the Department of National Defence, deputy minister Jody Thomas, had a message for unnamed male colleagues as part of the UN’s 16 days of activism against gender-based violence. “If you think that it’s ok to steal a glance or two at a work colleague’s chest while you talk to her, I can tell that we see you, it feels extremely degrading, and we want you to STOP,” tweeted Thomas. “Learn our eye colour instead.”

Paul Rochon‘s announced departure as deputy minister of finance was actually in the works for months, according to the Globe and Mail, which also sized up Rochon’s potential replacements. On the short list: fellow deputy mins Rob Stewart, Chris Forbes and Marta Morgan—but also Carolyn Wilkins, the outgoing deputy governor of the Bank of Canada. The Globe reports that Louise Levonian, the IMF executive director for Canada, is also in the running.

All your Canadian hometowns: Last week, dozens of readers replied to this newsletter’s callout for your longest list of hometowns. We heard from military families, bankers, the wife of a pastor, the son of a Seagram’s associate and another whose dad was a locomotive engineer. One of you was born in the U.S. and has spent time in Toronto, Edmonton, Regina, Whitehorse, and Sechelt, B.C.—and described yourself as just an “ordinary Canadian.” We won’t name a winner, per se, but we’ll conclude with the words of Mike Bullock, a 40-year military man who has lived all over the world. Along the way, people often asked him for a hometown. “I would necessarily have to answer nowhere and everywhere.”