The minister of everything, Chrystia Freeland, takes on the coronavirus 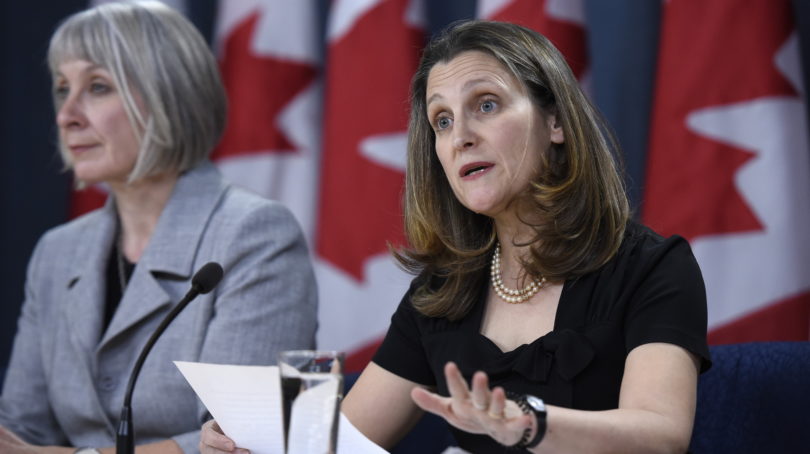 Prime Minister Justin Trudeau gave Minister of Everything Chrystia Freeland a new job as overseer of the federal COVID-19 response, and the deputy PM held her first press conference in that role yesterday alongside Health Minister Patty Hajdu and Chief Public Health Officer Theresa Tam. Freeland’s ad-hoc cabinet committee on the coronavirus had met earlier in the day, on the heels of Bank of Canada governor Stephen Poloz announcing an interest rate cut as global markets respond to the outbreak. Finance Minister Bill Morneau said Canada has the “fiscal capacity” to respond as the virus’s impact hits the economy.

A dedicated cabinet committee isn’t enough for Erin O’Toole. The Tory leadership hopeful, who joined rival Peter MacKay as the only other “verified candidate” in the race (ie. submitted all the required fees and endorsement signatures), called on the Liberals to take nine steps to hold the novel coronavirus outbreak at bay in Canada. O’Toole wants “more intense screening” at airports and an all-party committee that meets daily. (Regan Watts, an advisor to then-health minister Leona Aglukkaq during the H1N1 pandemic, tweeted recently about a similar all-party effort at the time.)

Survey says: MacKay is way ahead of O’Toole with Tory voters in a Leger poll: 38 per cent pick the former Progressive Conservative leader, compared to just nine per cent for O’Toole. But a massive number of undecided respondents—47 per cent who will vote Conservative—still need to take sides.

Wither deliverology? The Liberals rode to power high on a governance technique called “deliverology,” adapted from a Brit named Sir Michael Barber who popularized it in the Tony Blair-era, which focuses intensely on, well, delivering on campaign promises. In 2016, the Liberals appointed Matthew Mendelsohn, a think-tank ideas guy and former senior public servant in Ontario, to transform the way federal bureaucrats did business. His official title was deputy secretary to the Cabinet for results and delivery. Last year, Kathryn May reported for Policy Options that senior bureaucrats had starting laughing at the D-word.

Yesterday, Trudeau announced Mendelsohn would leave his senior role at the Privy Council Office and take up a visiting professorship at Ryerson University. Mendelsohn looked back fondly at his experience, citing a big culture change under his watch—and noted he’ll miss Kettleman’s bagels when he’s back in Toronto. If you’ve ever lived in Ottawa and moved away, you’ll know that sorrow.

Transport Minister Marc Garneau is in Washington this morning, where he’ll talk about “aviation safety in conflict zones” at a U.S. Chamber of Commerce conference. There’s little mystery about what’ll form the backbone of that speech. Meanwhile, Foreign Affairs Minister Francois-Philippe Champagne—who is currently in Ukraine—held a meeting yesterday of the International Coordination and Response Group formed after the Flight 752 disaster. A readout from the group said they “discussed in detail the options available to them, should Iran not abide by its commitments under the Convention on International Civil Aviation, to have the flight recorders downloaded and analyzed in a country with the capacity to do so, without delay.” No details on what available options were discussed.

We mentioned yesterday that a panel seat slated for a Russian representative at the CDA Institute‘s conference on defence and security went unfilled. The Russians perhaps had an inkling that military experts on a different panel, including senior Canadian brass, were about to label Putin’s regime the “greatest short-term threat to North America.” Not a friendly place for a Russian to talk geopolitics.

At the same conference, Chinese ambassador Cong Peiwu called his country’s cooperation with Canada on the fight against COVID-19 “good” and “appreciated.” But don’t expect that goodwill to solve the broader diplomatic issues, he said. Well, what else was the top Chinese envoy going to say?

This morning, Trudeau’s agenda takes him to a Boys & Girls Club in Scarborough, Ont. That stop is notable in part because it just so happens your newsletter correspondent once learned how to ride a tricycle at the very same club, lo those years ago.