The New Brunswick election: a victory for the 338Canada model

Philippe J. Fournier: The 338Canada projection model hit the mark yet again, and has now identified the winner in 90 per cent of all districts over five elections 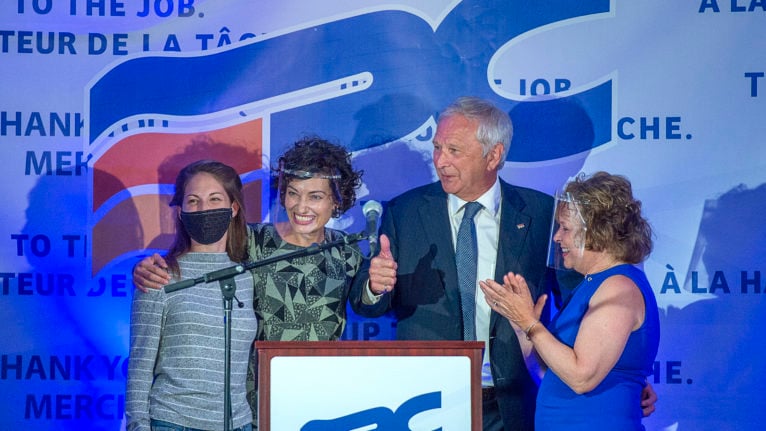 Premier Blaine Higgs with his family after winning the New Brunswick provincial election in Quispamsis, N.B. on Sept. 14, 2020 (CP/Andrew Vaughan)

On Monday night, New Brunswick Premier Blaine Higgs led his Progressive Conservative Party to a majority victory, securing 27 of the provinces 49 electoral districts with just over 39 per cent of the popular vote. It was the nation’s first provincial election since the pandemic began and, judging by the turnout rate of 66 per cent, it certainly appears that voters did not refrain from exercising their rights because of the pandemic.

Since New Brunswick’s population is just under 780,000, or about 2 per cent of Canada’s population, political polls in the province are usually few and far in between. This time around however a total of seven polls from six different pollsters were made public during the short 28-day election campaign. How did they fare? And how did the 338Canada model perform with this limited data?

First the results: Higgs’ PC won 27 seats with 39.3 per cent of the total vote. The NB Liberals won 17 seats with 34.3 per cent per cent—NB Liberal leader Kevin Vickers lost is election bid in Miramichi. The Greens took 15.2 per cent and held on to the three seats they held at dissolution. Finally, the People’s Alliance won two seats (which it already held) with 9.2 per cent of the vote.

The following table compares the performance of each pollster with the election result. Details on the methodology may be found here:

Once again, Léger was the most accurate pollster with numbers close to the actual results for every party except the NDP. Mainstreet Research was in the field until the last weekend and also performed well, and but overestimated Green support by as much as six points. However, considering the sample size of Mainstreet’s final poll, its results were within the poll’s margin of error for all parties except for the Greens.

Although EKOS had the worst top-line numbers of all (a tie between Liberals and PC at 32 per cent apiece), it did have the Liberals, PA and Greens within the margin of error, but it underestimated the PC by 7 points.

Finally, Oraclepoll, Narrative, and MQO all overestimated the PC and significantly underestimated the PA. The grades on the table above will be added to the 338Canada Rating of Canadian Pollsters page.

As for the 338Canada projection model, this was my first New Brunswick election, and also the first election in a “small” Canadian province (so far, I had covered the Ontario, Quebec, Alberta and federal elections). The 2018 NB election polls had been reasonably precise, but the seat results had been quite unpredictable.

At the provincial level, the 338Canada popular vote projections were right on the mark. Only the PA and NDP results were outside of the projection’s confidence intervals, and just barely so:

[On the graph above, the coloured bars indicate the projection’s confidence intervals and the black dots, the election results.]

The seats projections were quite precise as well, correctly calling the PC majority as the most likely scenario, as well as identifying the PC and Liberals seat totals spot on:

At the district level, most projections hit the mark, but there were some misses. Let’s start with the ugly:

In Miramichi, Liberal leader Kevin Vickers was projected in a statistical tie with PA incumbent Michelle Conroy. Vickers had been projected somewhat higher because of the habitual “leader bump”. However, that did not materialize, and Conroy won the district handily:

In Restigouche West, the model badly overestimated the Greens, so much that the final projection was a toss up between the Greens and Liberals. The Liberals won the riding by 40 points:

Ouch, that is painful to look at.

In Shippagan-Lamèque-Miscou, where then-PC candidate Robert Gauvin had won by 99 votes in 2018, the Liberals won a stunning 84 per cent of the popular vote this time around, beating the PC by 75 (!!) points. While the model correctly identified the Liberals as projected favourites in the riding, it underestimated the margin significantly. Clearly, the voters of Shippagan-Lamèque-Miscou had voted for Gauvin far more than the PC banner in 2018.

To be fair however, the cases of Shippagan-Lamèque-Miscou and Restigouche West could not have been accurately projected without specifically local polling, because neither of these ridings followed the provincial and regional trends in this election.

Here was the projection in Memramcook-Tantramar, where Green MLA Megan Mitton won re-election:

You may now compare all 49 riding projections with the election results on the 338Canada New Brunswick page.

The important thing to remember is that models like 338Canada are not perfect, simply because they are not meant to be perfect—with limited resources, it’s statistically impossible to call all local elections correctly. Electoral models using publicly available data are supposed to paint the general picture of the political landscape, and, while most ridings usually follow provincial and regional trends, there are exceptions in every election.

Nevertheless, after covering five general elections, the 338Canada model has correctly identified the winner in 90 per cent all districts (651 of 723).

Here is the complete breakdown of safe, likely, leaning and toss up projections thus far:

The next provincial election in Canada is scheduled to be held in Saskatchewan in late October. Voting intentions polls—a rarity in the province—have so far indicated that Premier Scott Moe and the Saskatchewan Party should win re-election with relative ease. We will follow the numbers as we get closer to election day.

Unless… British Columbia goes next?

Either way, we’ll see you there.