The new worry about the next election: your daily news

Sarmishta Subramanian: The risk this fall is not in the rise of a xenophobe or a left-wing populist. It’s in what’s happening to our media. 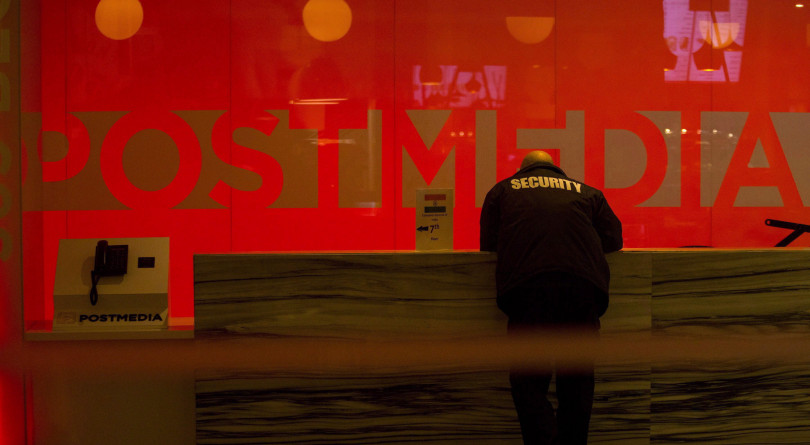 A security guard stands by the front reception desk at Postmedia's Toronto headquarters on Monday, March 12, 2018 (THE CANADIAN PRESS/Chris Young)

Election after election around the globe of late has had to confront the spectre of an information crisis. To address the challenges posed by disinformation and fake news, nonprofits and media organizations have launched a massive chain of fact-checking projects in more than 50 countries including France, the U.S., Argentina, South Korea, Brazil and Canada. But disinformation is only the most extreme version of the problem. Experts have serious concerns about the media’s broader role in driving divisions among voters.

And in Canada these questions, thanks to recent developments in the country’s biggest newspaper chain, may be something to start worrying about.

This fall’s election has been called, by all sides, a polarizing race featuring some polarizing leaders: Prime Minister Justin Trudeau, Green Party leader Elizabeth May and NDP leader Jagmeet Singh have all been dubbed left-wing populists by their critics in the media; Conservative leader Andrew Scheer has been tarred a white-nationalist sympathizer by his opponents; and Maxime Bernier’s calls for building border walls, or fences, speak for themselves.

But the material risk we face in Canada is not one of electing lefty cult leaders or xenophobes or, well, even bigger xenophobes; it’s the degradation of a newsmedia that has generally avoided the U.S.-style partisan model that launched Pizzagate and the Birther movement, and been a mostly reliable source of what everyone considers to be information.

There have been signs of hardening lines here. The SNC-Lavalin scandal featured newspaper columns lambasting Jody Wilson-Raybould and defending the Prime Minister, and also columns calling Wilson-Raybould a hero. But those columns have typically appeared alongside reported journalism, which can together present a range of perspectives on a story.

In June the company announced, though only internally, the appointment of a chain-wide editor to oversee political coverage. Postmedia, of course, owns the National Post, as well as 33 other daily newspapers including the Ottawa Citizen, Edmonton Journal, Calgary Herald, Vancouver Sun and Montreal Gazette (on top of dozens of non-daily newspapers). The company’s new executive editor (politics), Kevin Libin, will oversee or run federal political coverage in the Post as well as federal and provincial coverage in all of the chain’s metro daily broadsheets.

Libin is an old hand at the Post, and a natural fit for that paper, which has long had an explicit conservative stance. A former editor of the Western Standard when Ezra Levant was publisher, he’s a prominent conservative columnist, and was most recently comment editor and editorials editor of the Post and Financial Post.

But his new appointment means a single voice—and an ideological one—will now oversee or directly run political coverage in a fleet of papers, many of which are not conservative papers at all, beginning in an election year.

Before the appointment of the Calgary-based Libin, the Ottawa bureau was run out of the Toronto newsroom of the National Post, by Jordan Timm, an editor with a solid news background, and provincial political coverage was handled by the individual newspapers. With oversight now centralized in a single editor, it’s hard to know how much autonomy each paper’s editor-in-chief would have over politics coverage, or how much political range readers can expect from Postmedia papers. (Timm declined to be interviewed for this story, and Libin did not respond to an interview request from Maclean’s.)

Political coverage, of course, lies at the heart of what editors in chief and their editors do. The new arrangement marks the latest iteration of an inexorable push to centralization that former Edmonton Journal editor-in-chief Margo Goodhand traced in The Walrus in 2016: the shift to a central desk in Hamilton, Ont. to produce, as she wrote, “Regina Leader-Post sports pages, Arts fronts for the Montreal Gazette, editorial pages for the Vancouver Sun”; layoffs of publishers in favour of Postmedia regional heads; the deep cuts throughout the chain (hundreds of jobs eliminated) so a few small teams could create content for millions of readers of both the tabloids and broadsheets.

But with politics coverage in an election year, the stakes are even higher. As it happens, Mark Iype, the editor-in-chief of the progressive Edmonton Journal, as well as the Edmonton Sun, was recently seconded to a special project and has now been named Editor-in-Chief of Postmedia Special Projects, a role that has not been well defined publicly, but that for now includes reviewing newsprint consumption and a marketing component. His departure leaves the Journal editor-less a few months into a controversial new government’s tenure, with a federal election looming.

Asked about the vacancy left by his departure, Lucinda Chodan, senior VP of editorial at Postmedia and editor-in-chief of the Gazette suggested it’s par for the course. “The National Post was without an ‘active editor-in-chief’ when Anne Marie Owens left in mid-April; her successor starts work next week,” Chodan said via email in early August. “The Ottawa Citizen was without an ‘active editor-in-chief’ for three months when Andrew Potter left in 2016. These are senior positions and it takes some time to find the right person.”

But Owens’ and Potter’s employer had no control over their departures; they left their posts for outside organizations, McMaster and McGill universities, respectively. They were not absorbed into an amorphous role created by their newspapers’ corporate owner.

Libin’s appointment appears to be a signal of a broader shift within Postmedia. More than one Postmedia journalist contacted for this story recalls being told by a senior staffer there was an impetus to tilt conservative in order to appeal to audiences that management felt were underserved by other media. One noted that even before Libin’s appointment there seemed to be less space for reported stories that did not hew to a certain political world view. (Several current and former Postmedia staffers were interviewed for this story; they’ve been granted anonymity because they are not allowed to speak on the record.)

Some editorial friction, to say the least, seems inevitable in the near future given what happened during the last federal election, after senior management directed all Postmedia newspapers to publish an editorial endorsing Harper. Andrew Coyne resigned as executive editor of the Post, staying on as a columnist, when he couldn’t write a column that disagreed with the editorial. “As far as we’re concerned, if you’re the editor, you support the editorial position of the newspaper,” Paul Godfrey, then the CEO, told the Globe and Mail at the time.

The prospect of such tensions is bad news for the many talented writers at Postmedia who do important work at its newspapers, maintaining high journalistic standards under increasingly difficult circumstances. But it’s equally bad for readers, who will likely see a more constrained space for political news and opinion.

In April in another part of the Postmedia empire, Mark Towhey, Rob Ford’s former chief of staff and a Conservative strategist and not a journalist, was named editor-in-chief of the five Sun papers, owned by the Postmedia Group. The chain also made a bid to act as a content provider for Alberta Premier Jason Kenney’s newly minted energy war room, a project enacted to fight misinformation about Alberta’s energy sector, as Kenney put it. Critics have pointed to the ethical muddle of a media company producing partisan editorial material for a government it has a responsibility to cover. (The company engaged a former Conservative official, Kenney’s former chief of staff Nick Koolsbergen, to facilitate the bid.)

Postmedia stresses that its commercial content operations are separate from its newsrooms and have no effect on its editorial coverage.

It’s hard to know if the Postmedia changes represent a new political mandate, an editorial strategy to differentiate its media properties, or a business strategy to target a market of conservative readers that remains somehow underserved by the National Post and the right-leaning Sun papers. Chodan would say only that Postmedia’s strategy “involves delivering high-quality journalism to audiences who are looking for that.”

Whether a rightward push would be a sound business plan for a whole fleet of newspapers—the debt-ridden chain has not turned even one, the National Post, into a profitable enterprise on the assumption of a robust conservative readership—remains to be seen. If a political mandate, more than canny business sense, is driving the decisions, that risks nudging the country’s biggest newspaper chain into the activism side of the journalism-activism spectrum.

It would certainly complicate an already fraught process for the disbursement of the $600-million media bailout promised by the federal government. Newspapers have always taken editorial positions on political issues, but those are typically kept separate from their reporting function. Should a project with an explicitly partisan mandate for news coverage receive money earmarked for journalism? What are the optics for a Liberal government if it doesn’t, when one member of the panel deciding that is the head of Unifor, a union explicitly campaigning against the Conservatives? Why is the head of a union that explicitly opposes one party in an election year involved in any way in the distribution of government money to media outlets?

Even with declining circulations and revenues, newspapers, and media more broadly, set a tone for public debate, and the need for a healthy range of voices and opinions is urgent. The danger of a polarized media landscape isn’t just in people choosing one outlet over another, or believing one partisan set of facts and disputing another. It’s in people tuning out altogether, and eventually losing sight of what makes facts facts, and what distinguishes information from belief. The writer Cory Doctorow has described that predicament, using one of the more useful 10-dollar words around, as an “epistemological crisis.”

At its most basic, epistemology explains how we understand the world; how we know what we know; why we believe what we believe. Disagreement about what defines a fact is a much tougher bridge to cross than any disagreement about which information to prioritize or which political candidate to back. You’d think a media company, of all people, would appreciate that.

Aug. 8, 2019: This story was updated to include a comment from Postmedia about its bid to provide content for Alberta Premier Jason Kenney’s energy war room.