Paul Wells: An unprecedented avalanche of public contempt got the fake inquiry turned into a real one. The question remains, what was Ottawa thinking? 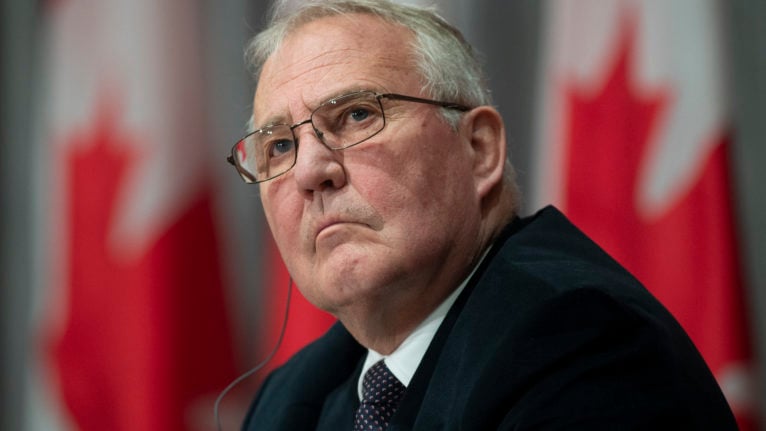 Blair appears at a news conference on June 9, 2020 in Ottawa (CP/Adrian Wyld)

There’s something satisfying in watching a house of cards collapse. It’s reassuring to be reminded that there is, in fact, a level of absurdity that is unsustainable from people who depend on votes for their positions. And so, with due respect to the Kielburger brothers and their marathon testimony to the Commons Finance Committee on Tuesday, by far the day’s most heartening spectacle was the governments of Nova Scotia and Canada finally closing a show that had run too long, the Refusal To Hold A Public Inquiry.

“We’ve listened to Nova Scotians,” federal Public Safety Minister Bill Blair wrote on Twitter, where this government does all its best work. Well, yes, I suppose listening to Nova Scotians was an option. It seems to have occurred to the minister a bit late.

Blair was writing to concede defeat in the face of an avalanche of public contempt such as I’ve rarely seen in 31 years in journalism. The contempt was the appropriate reaction to Blair’s attempt, in concert with Nova Scotia Justice Minister Mark Furey, to improvise a stunningly bogus “review” of the April 18-19 murders in and around Portapique, N.S. The review, they announced last Thursday after three months of dithering, would take the place of a public inquiry under the available federal and provincial Inquiries Act, and would have every characteristic of an inquiry except public hearings, subpoena power and the ability to compel witnesses to testify under oath. That’s like announcing you’ve invented a fruit that’s like a banana in every way except it isn’t yellow, bendy or edible. And expecting gratitude.

As often happens with unwise structures—a faulty bridge, the Hindenburg—the collapse was quick and spectacular. Questions from journalists calling in to Thursday’s announcement by Furey and Blair were real stumpers. I’m told “Who asked you to do this?” was a particularly low blow. Furey was big enough to admit the answer was “no one.” By Friday, at his regular COVID-19 news conference, Premier Stephen McNeil was feeling the outrage and starting to blame the Trudeau government.  “The reality is that we all know today that we have a public inquiry going on in this province that the federal government is not sitting at the table. We want them at the table. They need to be part of the solution.”

McNeil was referring to the inquiry into the deaths of Afghanistan war veteran Lionel Desmond and members of his family in a gruesome murder-suicide. McNeil’s government called the inquiry under provincial law, but even though it obviously has a lot to do with federal portfolios like Veterans Affairs and the Canadian Forces, only a lawyer representing the Attorney General of Canada is attending the hearings.

What McNeil was hinting was that the Trudeau government was privately threatening to boycott, and thus to wreck, a formal inquiry that will inevitably focus on the performance of the RCMP. I still do not understand why he didn’t just say so. Federal and provincial governments are not superior and inferior. They’re sovereign in their jurisdictions, and to say the least, there is ample precedent for a provincial government crying foul when Ottawa doesn’t act appropriately.

A Halifax colleague suggested a cat might have McNeil’s tongue because Nova Scotia receives $4 billion a year in federal transfer payments. My own theory is that we were being given a runaround. If Blair could appear with Furey and swear he’d make the RCMP cooperate with a fake inquiry, he could bloody well ensure they’d participate in a real one. Except it was increasingly clear both governments were terrified of what a real inquiry might find: a perpetrator who might well have a working relationship with the police force that was tasked with stopping him, and vast stretches of rural Canada that might discover it’s not protected by competent and accountable police.

So the Blair-Furey announcement was a shambles, the McNeil presser was a festival of passive aggression, and suddenly it was the weekend. The contempt for the governments’ action was wall-to-wall. Honestly, there’s always somebody happy to defend something any government does, even in Belarus, but not this time. Monday was given over to 22-minute wildcat strikes across Canada and to a #22reasonswhy social-media blitz to pressure the governments.

It worked. Nova Scotia’s nine Liberal MPs had signed, or been presented as having signed, a letter endorsing the fake inquiry on Friday. Tuesday morning the CBC reported that one of them, provincial New Democrat turned federal Liberal Lenore Zann, now said she hadn’t been consulted on the federal response and disagreed with it.

Lenore Zann is the MP for the riding where the murders happened. Bill Blair needs to look around his office, find who decided to ignore Zann, and fire that person. If that person resides in Blair’s mirror my advice is the same.

By midday three more Nova Scotia Liberal MPs were disagreeing with their public position from Friday. So along came Mark Furey, echoing McNeil’s sotto voce argument that Ottawa was the problem. Sure he’d like a full inquiry, Furey wrote—if the feds would ensure the RCMP and other federal agencies participated.

Finally, Blair decided he wasn’t going to be the only politician sticking to last week’s principles. He’ll transform the fake inquiry into a real one under the federal Inquiries Act, with subpoena power and sworn testimony, just as everyone with an interest in this story has demanded since it happened.

We are left to draw lessons.

Everybody—everybody—who had expressed an opinion on this question had called for a public inquiry with real power to compel testimony. Here’s my first column on the subject, five weeks ago. By then law professors, Nova Scotia Senators and the victims’ families had already repeatedly called for an inquiry. Furey had promised one so frequently that his repeated assurances were already hard to take seriously. In early July, dozens of the country’s major women’s groups announced their impatience with both governments’ apparent willingness to claim a “restorative approach” as a pretext for a toothless process. By mid-July, my questions to both governments were being answered with distracted, meaningless boilerplate of the sort governments now routinely spit out when they can’t be bothered even to read the questions.

This is the problem. These two Liberal governments are the problem. I come late to the McNeil government in Nova Scotia, but I have lived long enough with the Trudeau government in Ottawa to be heartily sick of its crap. They both spend far too much time talking to themselves because they like the answers better than the ones they would get if they listened to citizens.

So they consult but they never listen. They proclaim the value of evidence-based policy, and then they pick a judicial process, an NGO to administer a social program, a Governor General without bothering to seek out any evidence. When you complain, they threaten you: what if the other guys were in power instead? As if the other parties were a walking license to govern badly.

I really believe the communications style of these governments, particularly the one here in Ottawa, is at the very heart of its current malaise. If you can’t explain yourself, it may be because you’re doing something indefensible. If you won’t even read questions before emitting non-answers, it may be because you haven’t begun to think. If the only comfortable conversations you ever have are with five or six people in your office, it may be that you’ve forgotten what you might ever have known about the country.

That’s why people were so angry. We still think we live in a democracy. In fact, we insist on it.